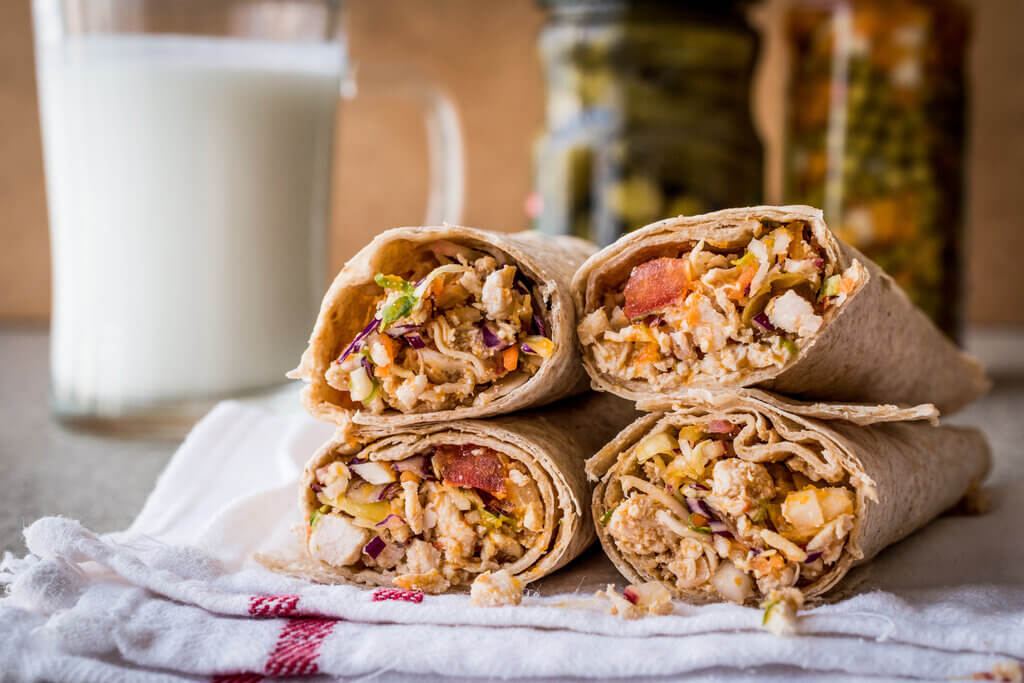 Shawarma vs Gyro: How Exactly Are They Different?
Table Of Contents
'

Street food varies across the globe, each with its specialties and interpretations of a familiar dish. Surely you’ve heard of gyro and its Middle Eastern cuisine counterpart, shawarma? These popular street foods are often mistaken for one another as they share similar ingredients and preparation. But how exactly are they different? In this article, we’ll compare the two to settle the shawarma vs gyro debacle once and for all!

What Is a Shawarma? 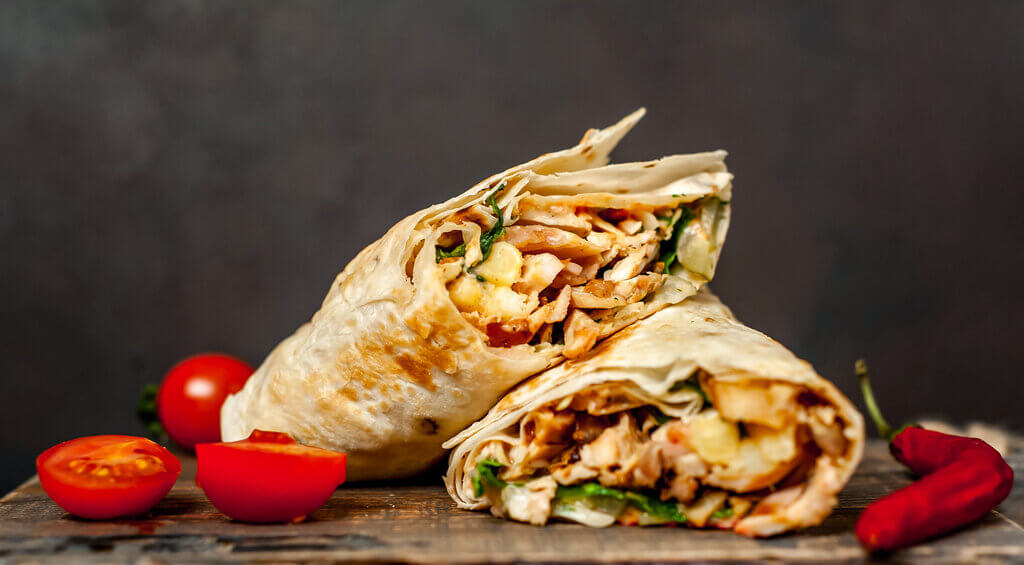 This popular Middle Eastern street food is a hand-held meal filled with tender meat, veggies, and sauce. Its name is derived from the Turkish term for “turning”, referring to how the meat is cooked. The seasoned shawarma meats are stacked and roasted on a vertical rotisserie. Then, cooked pieces are sliced off, garnished, and wrapped in bread. Typically, shawarma is made with lamb, mutton, chicken, and turkey meat. Though nowadays beef shawarma is also becoming popular.

Shawarma is often confused with other Middle Eastern food like a kebab. Shawarmas and kebabs use similar spices and flatbreads as their choice wrap. But their difference lies in their names.  Doner kebabs specifically refer to a piece of grilled meat, while shawarma refers to the combination of seasoned meat, pita, and other ingredients.

How Is Shawarma Made? 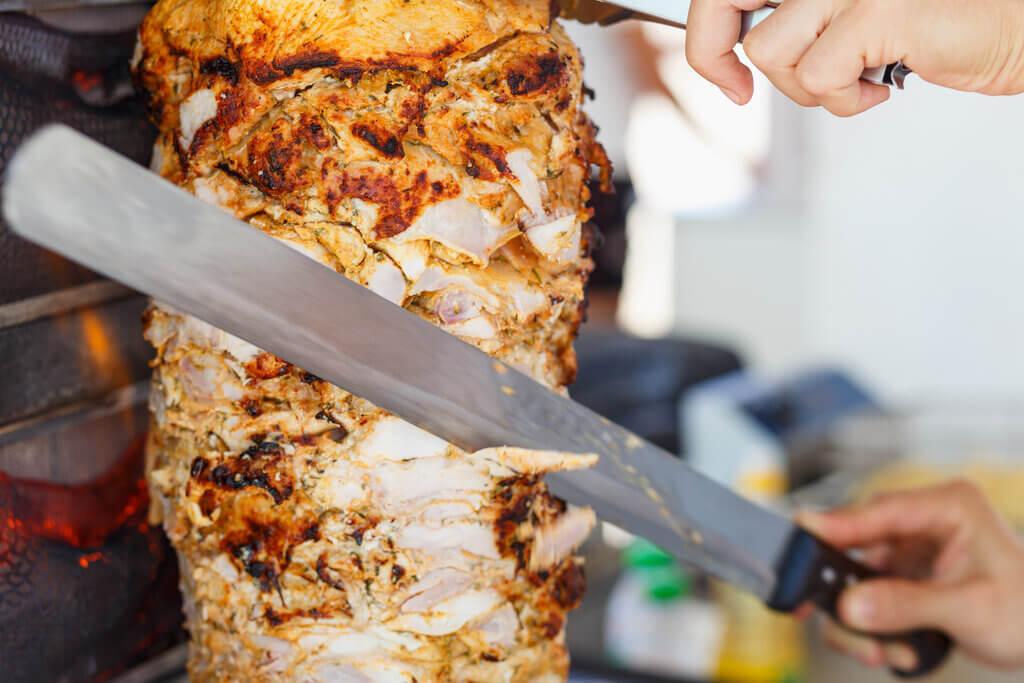 This delicious meal starts with chunks of meat that are meticulously marinated in seasonings and spices. The main spices used for shawarma are usually turmeric, garlic, cinnamon, cloves, and cardamom, along with additions depending on the blend or recipe.

As shawarma focuses more on the taste of the meat, it is marinated all day giving it intensely complex flavors. The meat will then be stacked in a vertical rotisserie and slowly cooked as it rotates. Sometimes pieces of fat will be stacked in between the meats to help tenderize and bring more flavor to them. This is especially done with lean cuts of meat like in chicken shawarma.

Once the meat is cooked, a long sharp knife is used to shave pieces to wrap in pita bread and garnish. It is usually topped with pickled vegetables along with hummus, tahini, and tabbouleh.

What Is a Gyro? 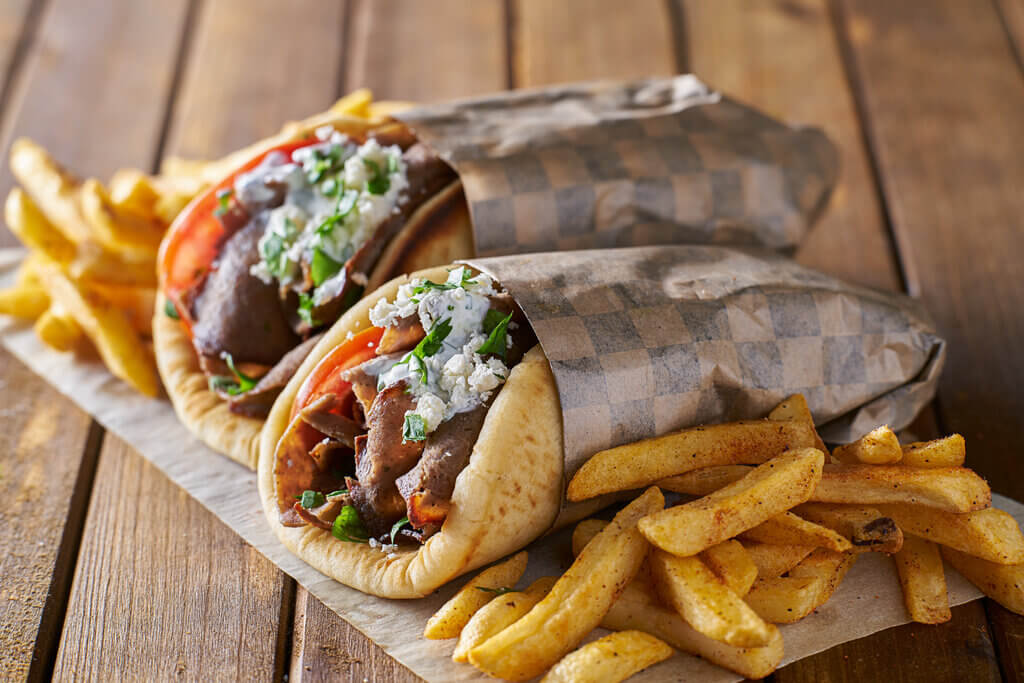 Gyro is a popular sandwich wrap in Greek cuisine filled with meat, vegetables, and yogurt sauce. In Greek, gyro means “round” or “turn” which alludes to the rotating spit used to roast meats. The method of roasting stacks of meat in a vertical rotisserie was introduced by Turkish immigrants to Greece.

Gyro meat is typically made with lamb, beef, pork, and recently, chicken. This sandwich is a great on-the-go meal much like shawarma. However, although they share similar ingredients and appearance, this Greek street food is unique in its own right.

Comparing gyro vs souvlaki in Greek cuisine is similar to comparing shawarma and kebab. While both are grilled meats, souvlaki is skewered pieces of either pork or lamb, though beef and chicken souvlaki are more popular. A gyro is basically thin slices of meat served in pita bread with plenty of accompaniments.

How Is Gyro Made?

For gyros, the meat is marinated with a combination of garlic, thyme, rosemary, and oregano along with other traditional Greek flavors. Traditionally-made gyros are made with flat and thinly sliced pieces of meat that are then stacked together and roasted. Slices are shaved off the roasted loaf and packed into pita bread to enjoy.

It can either be served in a pita or deconstructed to become a gyro meat platter with other ingredients. Most gyros are served with shredded lettuce, tomatoes, and sliced red onions. And to finish, it is best topped with a tangy tzatziki sauce which is a must for this dish. Additionally, french fries sometimes accompany this meal.

Difference Between Shawarma vs Gyro 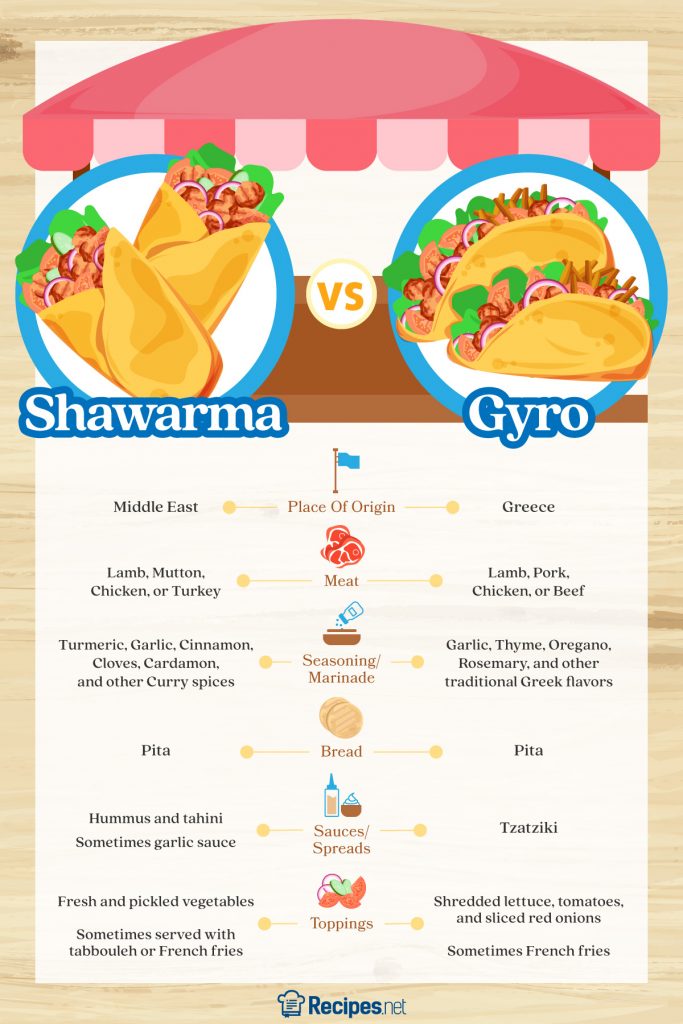 Looking at the similarities between these two popular street food, they are mainly derived from Turkish doner kebabs. Specifically when it comes to the cooking method of stacking meat in a vertical rotisserie. Admittedly, it is understandable how they are often confused with one another. On the whole, shawarma and gyro are similar in construction as they both combine meats, spreads, and toppings packed in delicious pita bread. Not to mention, they are both cheap mouthwatering delights that you can have whenever you want.

Shawarma is Middle Eastern and Gyro is Greek

The main difference between shawarma and gyro is, of course, their place of origin. Shawarma is a Middle Eastern dish while gyro hails from Greece. This is relevant to note as the spices and condiments used in each of the dishes are ones that are abundant in the location.

Their Seasoning and Marinades

Turmeric, cinnamon, cloves, and cardamom are spices that flavor shawarma meat. In comparison, gyro meat is boosted by herbs such as thyme, oregano, and other flavors specific to Greek cuisine.

You can simply tell apart the strong and warm flavors of shawarma compared to the aromatic and earthy notes of herbs in a gyro. Usually, you’ll find bits of whole herbs in gyro meat while shawarma meat is saturated in color and spice.

Their Choice of Meats

The differences in meat used are also a good comparison. While both use lamb in the dish, shawarma is usually made with chicken, turkey, or mutton whereas gyro traditionally come in pork, beef, and chicken. As shawarma originates from the Middle East where most people don’t eat pork, they don’t really use pork in the dish.

Both of these dishes are garnished with a medley of vegetables. However,  traditional shawarmas are topped with pickled vegetables, unlike gyros which usually come with fresh veggies like lettuce, tomatoes, and onions. Moreover, both are sometimes filled with crinkle-cut or thick slices of steak fries.

Their Sauces and Spreads

The distinction in flavors is also highlighted in the sauces and spreads used. Shawarma is often served with tahini and hummus or a garlic sauce. As opposed to its Greek counterpart that uses tzatziki sauce.

Between tzatziki and tahini, there’s a stark difference in flavors. Tahini is more of a paste than a sauce, it’s nuttier in flavor as it is made with toasted sesame seeds. Meanwhile, tzatziki sauce is a yogurt-based Mediterranean sauce with cucumbers, garlic, and lemon. You will most likely not find any shawarma with tzatziki sauce in it and if you do, that’s probably gyro!

Shawarma isn’t really well known as a healthy food because pieces of fat are intentionally added to make the meat juicy and flavorful. Premade shawarmas are incredibly convenient and satisfying but the fats, sugars, and salt can be concerning for some. We recommend eating this food in moderation. But if your craving calls, you might want to consider making it yourself. This certainly helps to control the number of fats and sugars used in the recipe. What’s even better is that you can switch or remove ingredients for healthier alternatives!

Gyro meats sold from food stalls and trucks are brimming with flavor. But similar to shawarma and any other meat dish, the addition of too many fats, salt, and sugars can be unhealthy. But it all comes down to preparation, so don’t worry! You can still have that delicious Arby’s Greek gyro without any guilt if you make your version at home. Seasoning and cooking the meat with less oil and cooking it at a specific time and temperature ensures juicy meat with no additional oils.

What is the difference between gyro and pita?

The answer is simple. Gyro is spit-roasted seasoned meat typically served in bread with other ingredients and sauces. On the other hand, pita is a type of flatbread that is used to make plenty of hand-held sandwiches that include gyros and shawarma.

How to pronounce gyro?

It’s always a nice gesture to take the effort to properly pronounce food names from other countries. To help you out, gyro is pronounced as ‘yee-row’.

Shawarma and Gyro Are Different Cuisines with Similar Origins

The simplest way to differentiate the two delicious food is by looking closely at their origins. As discussed, though they are similar in cooking techniques, they are different when it comes to the seasonings used. They are both unique in their own right and who’s to say one is more delicious than the other? Whichever you prefer, they are guaranteed to satisfy your cravings on the go.

Read Next: Butter Chicken vs Tikka Masala: What’s the Difference?

Stromboli vs Calzone: What Is the Difference?