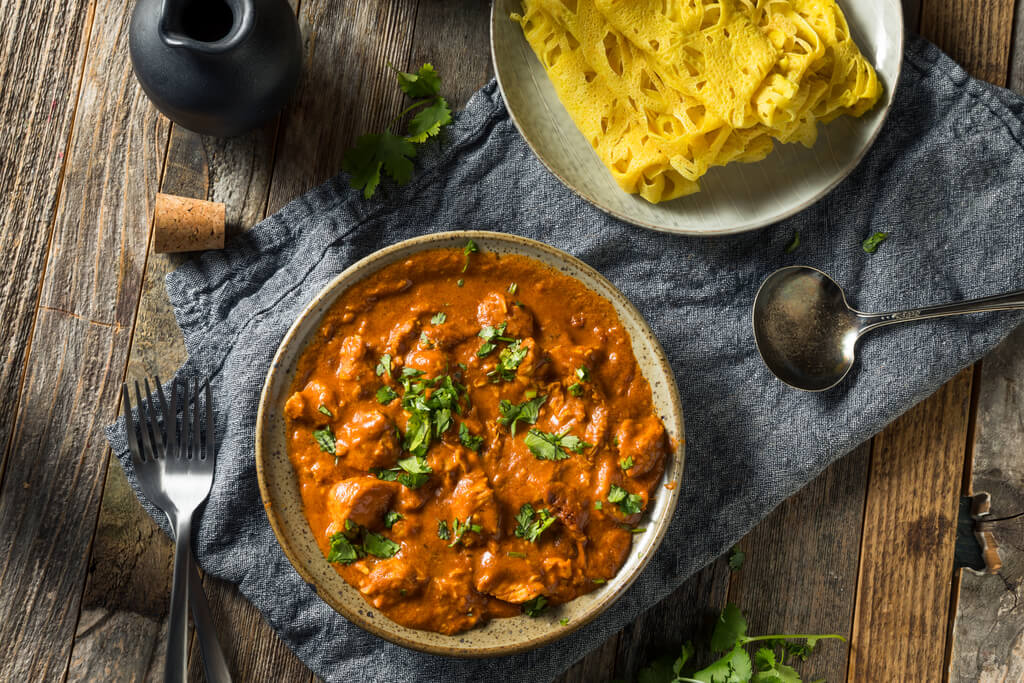 Indian cuisine took the world by storm with the unique taste and aroma of its flavorful dishes. And while they are distinctive, differentiating some of the dishes can be a challenge to some. We’re thinking of two specific, similar food here, namely butter chicken and tikka masala. With their orange hue and aromatic smell, these two reigns as some of the most popular Indian dinner recipes.

It’s no secret that butter chicken vs tikka masala is a discussion that has been going on for quite a while. Now, it’s time to put that confusion to rest. In this article, we’ll talk about their similarities and differences in cooking methods, preparation, and more. Read on more and find out everything you need to know about these well-loved dishes!

What Is Butter Chicken? 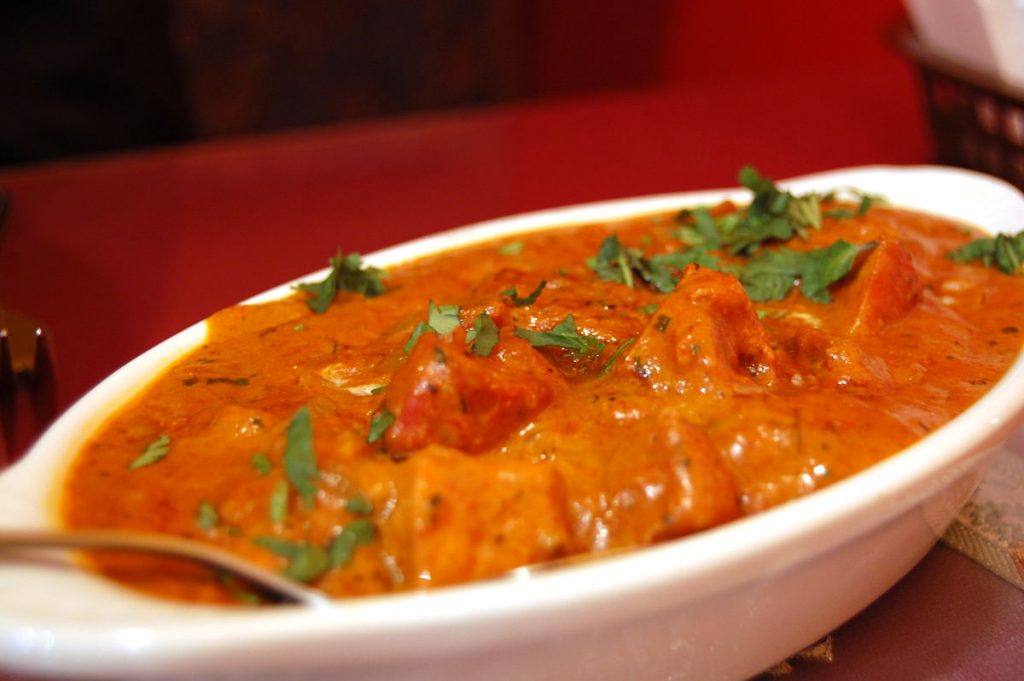 Butter chicken (traditionally known as murgh makhani) is a sort of curry dish that originated in Delhi, India. While butter chicken is not unheard of in many countries, it has its fair share of variations like many dishes. Butter chicken is unique to different regions in India, each with its own version of the dish though the difference is subtle. But in general, it’s made of chicken pieces marinated in aromatic curry spices such as garam masala, turmeric, cumin, ground coriander, and more. The chicken pieces are then soaked in a creamy, mild-spiced tomato sauce-based curry made richer with butter, yogurt, and cilantro.

Whichever variation you make, you can always pair it with a bowl of fluffy basmati rice or garlic butter naan bread that you can dip in the curry sauce. Because butter chicken is orange (sometimes inclining to red) in color, it’s always compared and sometimes thought synonymous with chicken tikka masala.

What Is Tikka Masala? 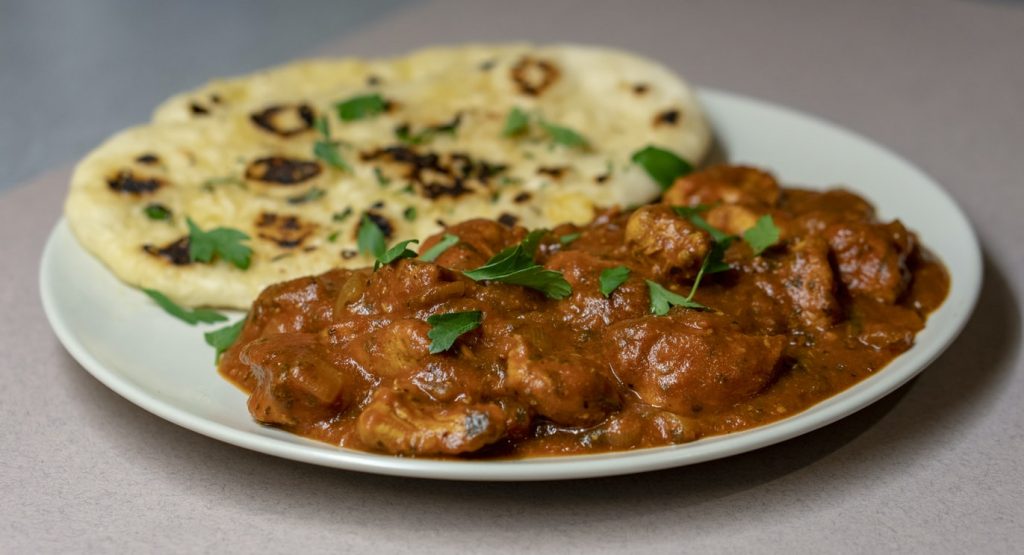 Like butter chicken, chicken tikka masala is chicken chunks (chicken tikka) in a creamy curry sauce. To make this dish, the chicken pieces are first marinated in garlic, ginger, chili pepper, and other curry spices. After marinating, the chicken is grilled first before smothered in creamy tomato-based curry sauce.

Despite what you may think, tikka masala is not an Indian dish. Yes, you heard us right. Currently, its origin is filled with many mysteries. Food historians, however, claimed that it can be dated back to a small restaurant in Glasgow in the 1970s. Some claim that the dish is British while some say it’s Indian. Whichever, it’s safe to say that tikka masala is an amazing fusion of British and Indian cuisine that many of us enjoy. All in all, this fusion dish is served with a buttery, yet earthy gravy with a distinct spiciness that came from curry spices.

Butter Chicken Vs Tikka Masala: How Are They Different? 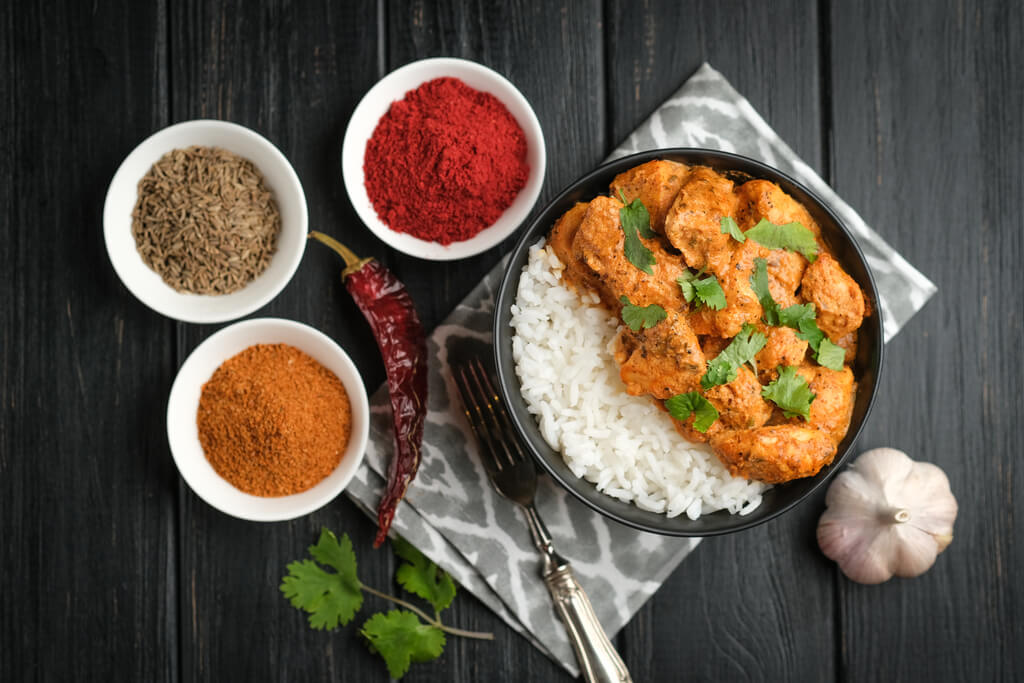 Both dishes use chicken, tomato paste (some versions use other tomato-based sauces such as passata), garam masala, yogurt, ginger, and more. However, butter chicken uses chicken with bones still intact. Tikka masala, on the other hand, uses boneless chicken. Additionally, the amount of tomato used in each dish also varies. Butter chicken uses lesser tomatoes which is why the tomato flavor that we pick up in butter chicken is moderate.

Tikka Masala vs Butter Chicken: Which Should You Try?

To answer the question, both are delicious in their own way. Although both dishes look the same and practically use the same ingredients, they’re not made to showcase the same flavors.

Butter chicken is creamier, sweeter, and less spicy. On the other hand, chicken tikka masala is made with spices and ingredients that complement each other so it has a stronger spice flavor that is meant to be tasted, not cut and balanced, unlike butter chicken.

For this matter, the better choice would be depending on your preferences. If you don’t have a problem with spices and the kick that come with it, you should try tikka masala. On the other hand, if you enjoy a creamy curry with a less intense spice flavor, the best option is butter chicken. But definitely give both dishes a shot!

How to Make Butter Chicken

Pair this well-loved dish with garlic naan bread or basmati rice. To make it, follow the recipe below.

How to Make Tikka Masala

Follow the recipe below and make the best chicken tikka masala!

Which is healthier, butter chicken or tikka masala?

What is the difference between korma and butter chicken?

Just like butter chicken, chicken korma is another mildly spicy and creamy curry. However, korma is not made to display the heat of the spices but rather to flavor it. It uses spices such as cardamom and cinnamon. Meanwhile, butter chicken uses turmeric and chili peppers for a mild spicy kick. Chicken korma also has a slightly sour flavor because of the yogurt.

What is the difference between vindaloo and tikka masala?

Chicken vindaloo has a thick curry base that’s relatively spicier than tikka. Meanwhile, tikka masala contains creamy ingredients such as yogurt and heavy cream to give it a rich creamy, yet spicy sauce.