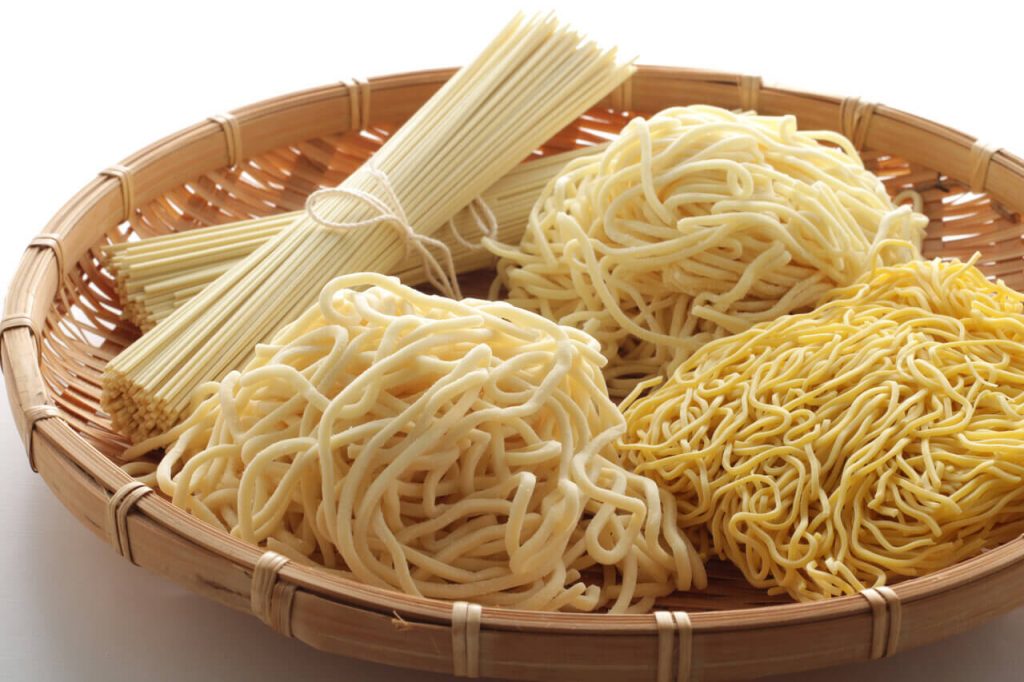 Japanese cuisine further solidifies its reputation as a gastronomic powerhouse thanks to different types of ramen and culinary staples gaining popularity worldwide. For instance, Japanese noodles are one of the ingredients (and dishes) loved by many. From udon and ramen to soba, there are many recipes containing one of these long noodles.

However, they’re not exactly easy to differentiate, especially if you did not grow up eating them. Well, no worries. We’ve put together a list of different types of Japanese noodles to help you differentiate them better and what recipes suit each. Continue reading to find the perfect noodle for your ramen, soup, and stir-fries! 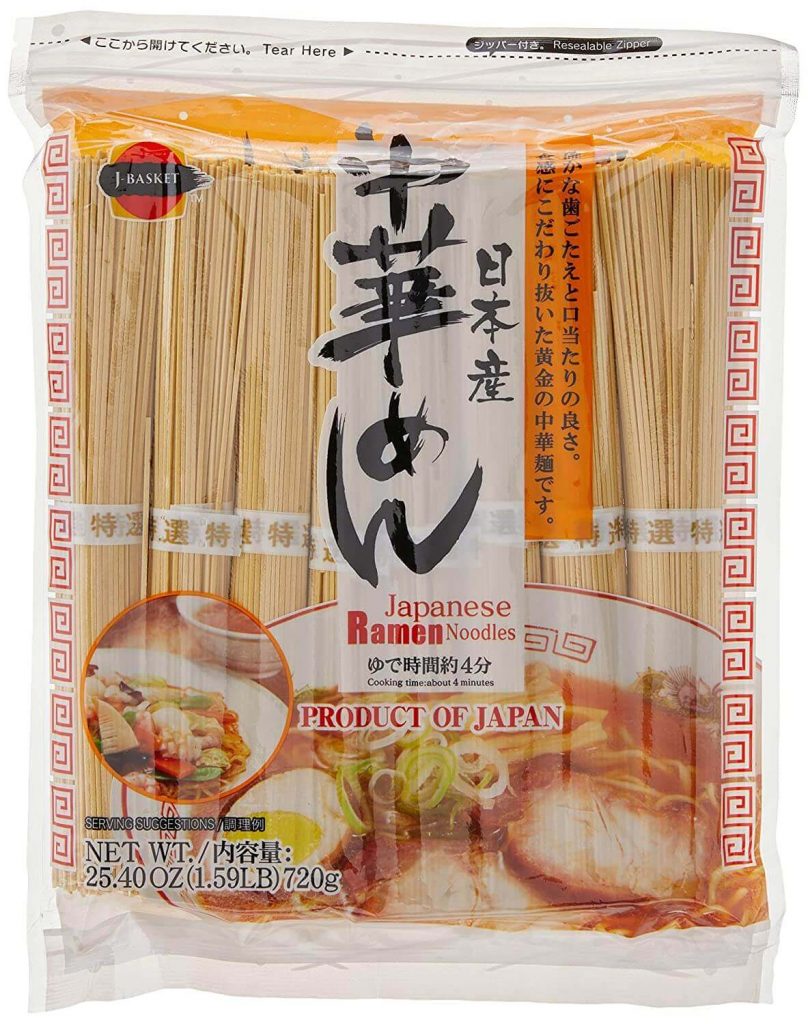 Buy on Amazon
Ramen is one of the most famous Japanese dishes to date. It’s so momentous that there’s a whole museum to present its history and its significance in Japanese cuisine. So naturally, ramen is also the most famous Japanese noodle. This wheat-based noodle features thin, curly noodle strands made of wheat flour, salt, water, and kansui (a sort of alkaline water). With its distinct yellow color, you’d think it has eggs but that’s actually from the added kansui. Now, ramen is an umbrella term for other types of ramen noodles with slight variations in shape and ingredients (e.g. whole wheat, gluten-free). There are also kaku-giri (square-shaped), maru-giri (round-shaped), and hira-uchi (flat-shaped) noodles. They are either straight and linear or curved and curly. As a dish, ramen is typically served with tonkotsu (pork bone) broth and other ramen toppings like chashu (a thinly cut piece of pork), nitamago (flavored egg), narutomaki (Japanese fish cake), and other vegetable garnishes. Aside from tonkotsu ramen, other popular ramen dishes are: 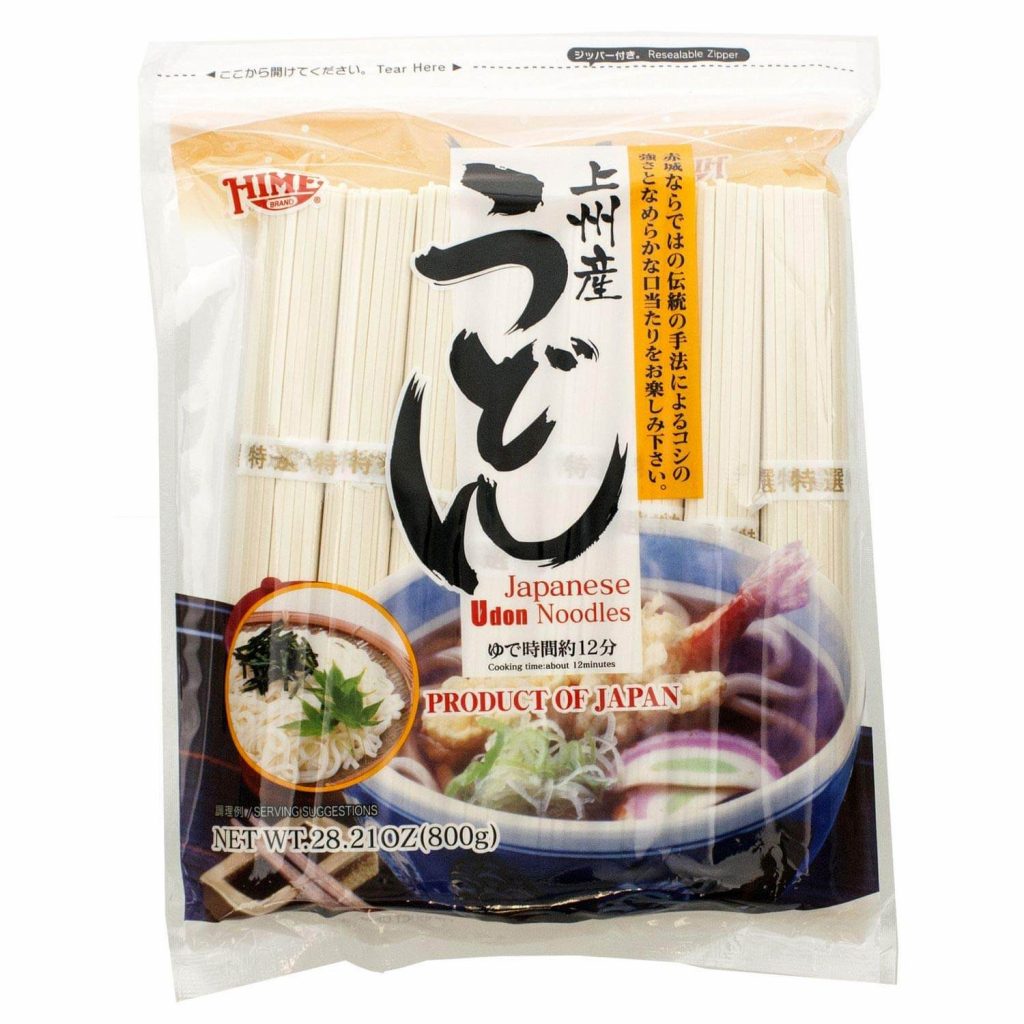 Buy on Amazon
While ramen is characterized as thin with yellow-colored strands, udon is identified through its thick, white noodles. It starts with ingredients like wheat flour, water, and salt. As you’d notice, it uses simple, neutral-flavored ingredients. This gives udon more versatility than some noodles, allowing more room to experiment with different sauces, condiments, and toppings. The usual include tempura, boiled eggs, karaage (Japanese fried chicken), narutomaki, and seasoned fried tofu. Like ramen, udon has many types under its belt coming from different prefectures. Currently, there are 11 types. Some of the popular ones include himokawa (wide noodle about 15 centimeters in width), kishimen (flat udon noodle), and ise (characterized by its thick and chewy bite). Below are popular udon dishes:

Buy on Amazon
Soba has more in common with the famous Italian pasta, spaghetti, than you might think. Both noodles have thin and round noodle strands. Still, they are different. Because it’s made with buckwheat flour, soba noodles have a darker color and a nutty, earthy taste that’s very different from spaghetti’s more neutral taste. Now, because of their more nuanced flavor, soba noodles complement the simplest of soup bases. One of the popular recipes is zaru soba. Here, the soba noodles are chilled first and then served with tsuyu (dipping sauce). For cold soba, various toppings like tororo (Japanese mountain yam puree) and grated daikon radish are common. On the other hand, warm soba involves tempura and duck. Aside from this, they’re also used to make noodle stir-fries. Here are other soba dishes: 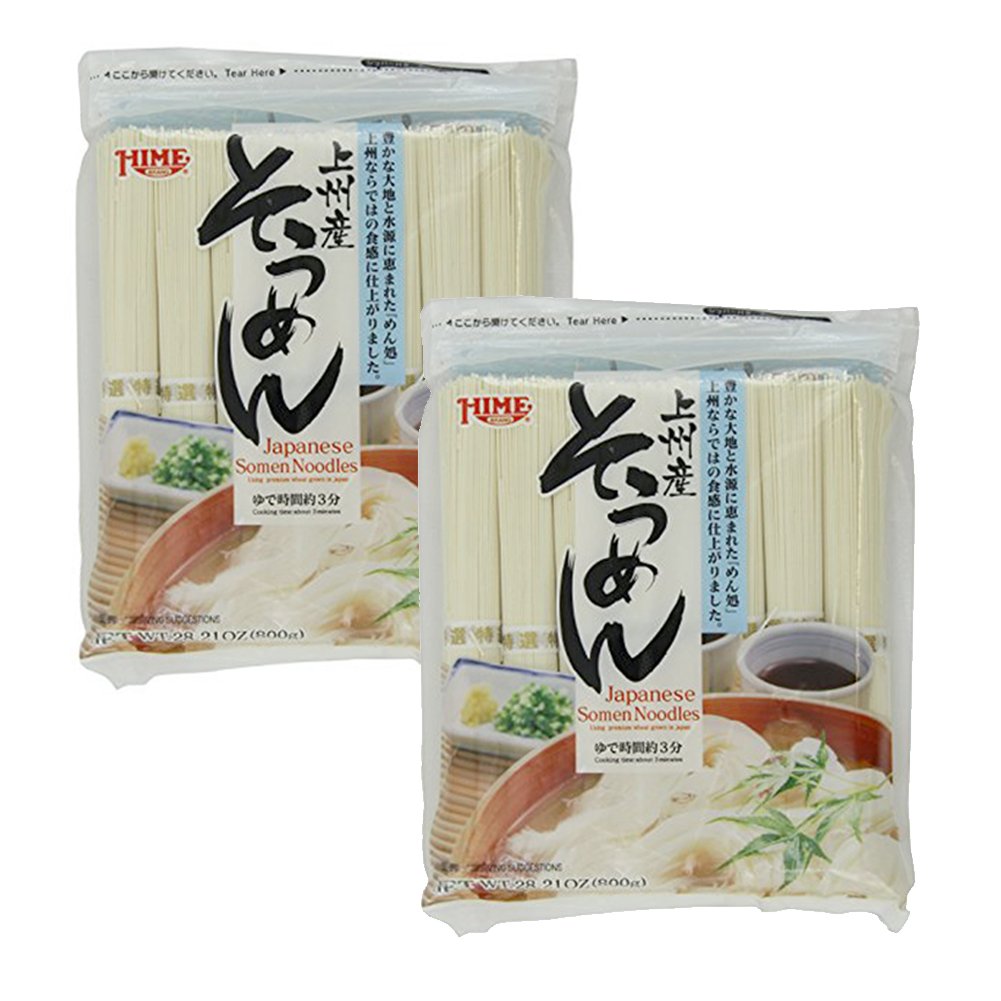 Buy on Amazon
Somen are white Japanese wheat noodles that have very thin strands (only about 1 millimeter in diameter). You can serve it hot or cold. In Japan, they are served as a refreshment during the summer and placed in long bamboo flumes called nagashi somen. Diners then catch the somen as it passes by them. But you can also make it at home served in a bowl with ice and a side of tsuyu, thinly sliced shiso leaves (perilla leaves), grated ginger, and scallion. In the winter, somen noodle soup or nyumen is served with warm dashi soup and toppings like shiitake, fish cake, eggs, green onions, and mitsuba (Japanese parsley). 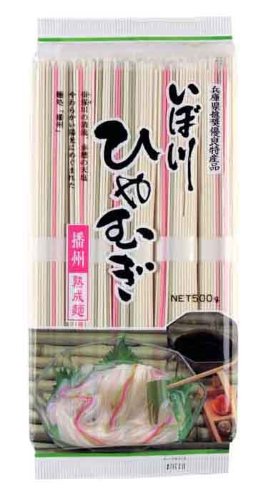 Buy on Amazon
Hiyamugi is thin wheat noodles (between 1.3 millimeters to 1.7 millimeters in diameter) quite similar to somen and udon. To be precise, it’s thicker than somen and thinner than udon. To prepare hiyamugi, boil it first and then chill in ice and running water. After being chilled, it’s served with tsukejiru (cold noodles dipping sauce) made with soy sauce, sugar, mirin, and bonito flakes. Then, it’s garnished with braised shiitake mushrooms, julienned omelet, spring onions, grated ginger, and sesame seeds. Now, the noodles are usually white but like many noodles on this list, it has varieties under its wing. In Japan, you can spot plain noodles in the grocery store as well as white mixed with pink and green noodles. 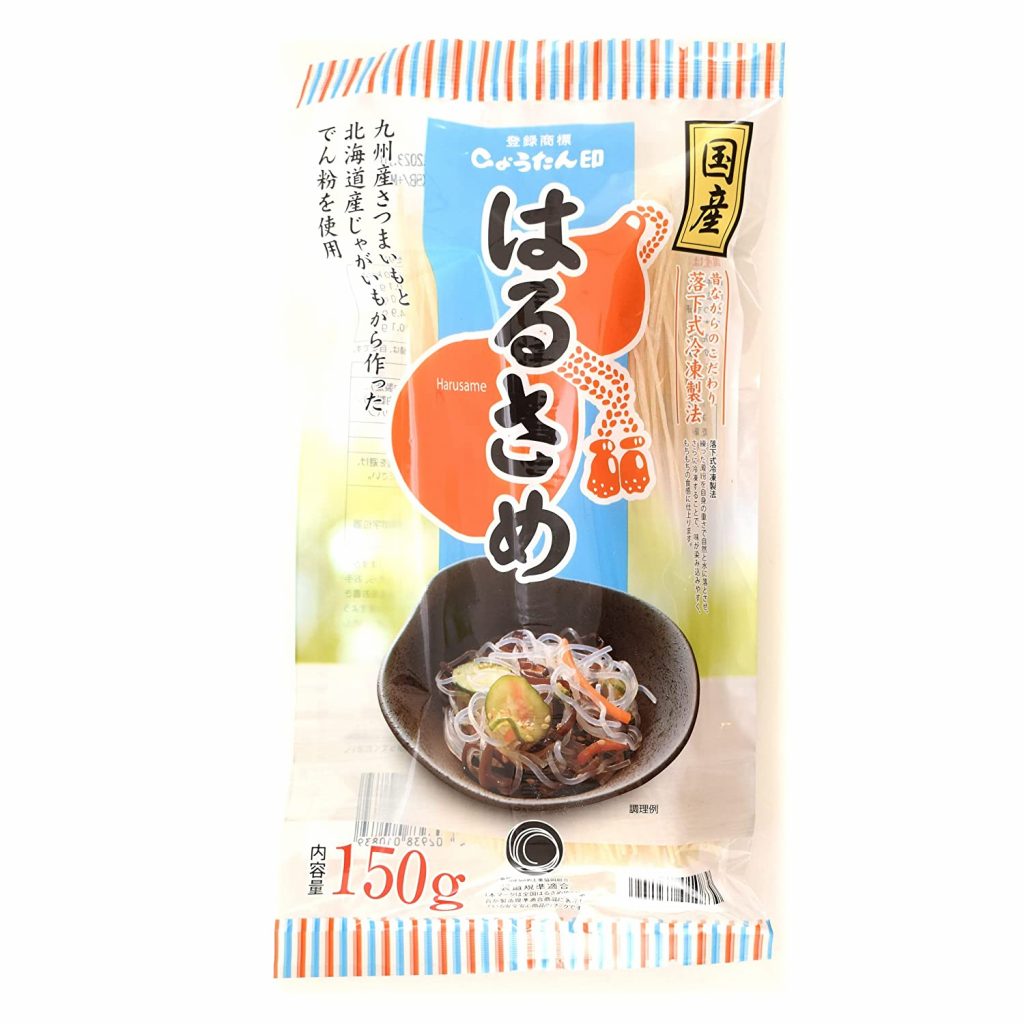 Buy on Amazon
Glass noodles made of potato starch called harusame are the most commonly found type of glass noodles in Japan. Its appearance resembles vermicelli: glass-like and thin but with round noodle strands. They are often used to substitute dangmyeon (Korean sweet potato noodles) and other Chinese glass noodles. You can use it in salads, hot pot dishes, and noodle stir-fry dishes like the following: 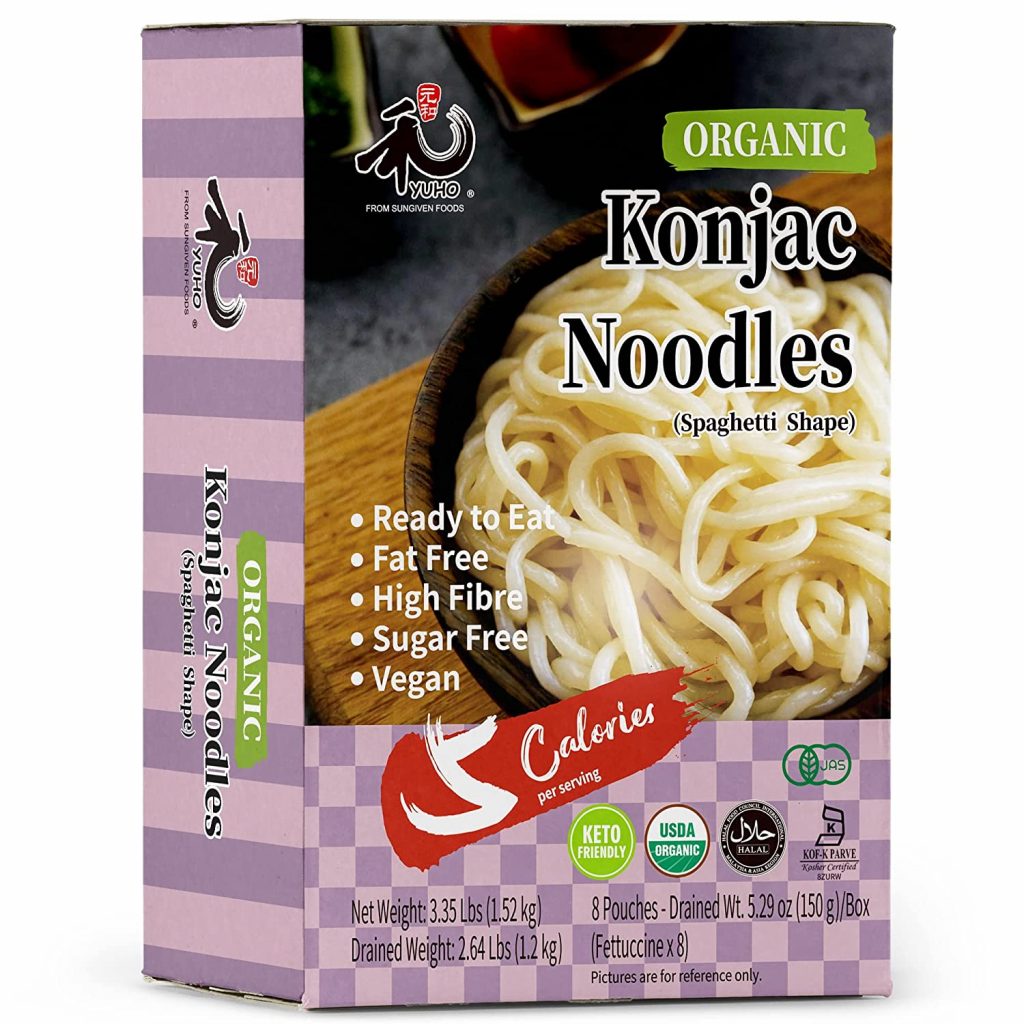 Buy on Amazon
Besides ramen noodles, shirataki or konjac noodles (meaning white waterfall) have grown in popularity in other countries as it’s low in calories and carbohydrates. That is why those who wish to lose weight prefer shirataki over other types of Japanese noodles. Made of konjac root or yam, shirataki has a translucent, glass-like appearance. It also has a neutral flavor so it’s used to complement a variety of dishes. Still, they are traditionally used to make sukiyaki (Japanese hot pot dish), nikujaga (Japanese meat and potato stew), and other stew and hot pot dishes.

Now that you know everything you need to know about these Japanese noodles, you’re ready to embark on a culinary adventure. You can switch your usual ramen with different types and variations with varying colors and shapes! You can also find health-friendly options like shirataki. With a few pointers, descriptions, and buying guide above, we’re sure you have a noodle in mind to try. Don’t know where to start? Give our recommended recipes above a try.

Read Next: How Long Is Ham Good for in the Fridge and Freezer?

Coconut Aminos vs Soy Sauce: Which Is Better?