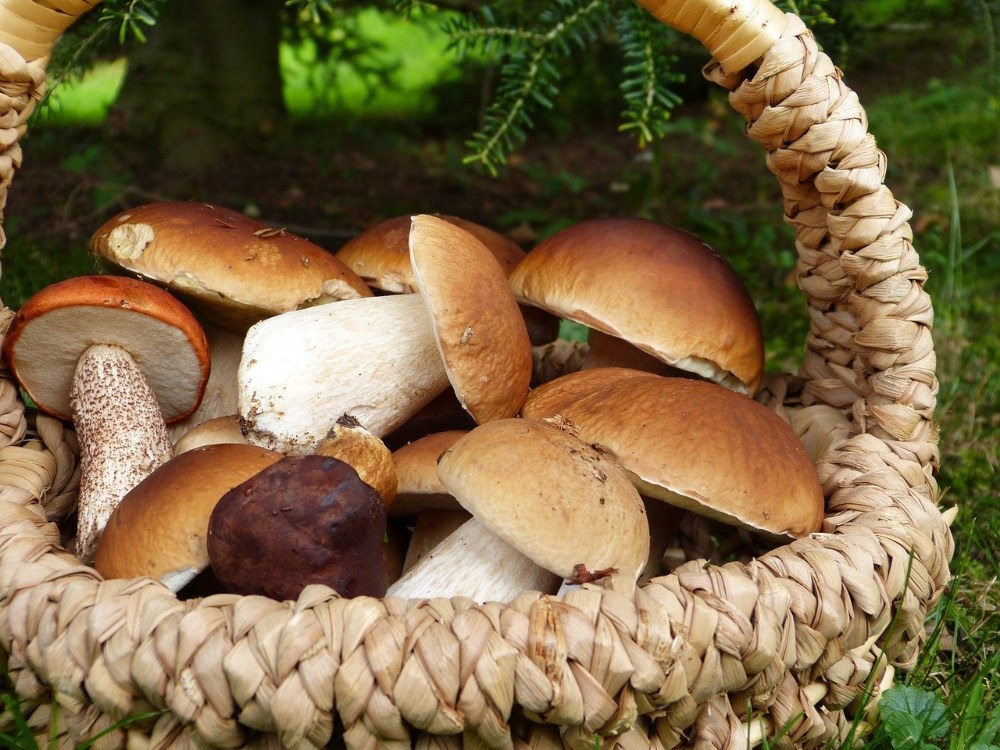 Porcini Mushrooms: What Are They and How to Use Them in Cooking
Table Of Contents
'

Porcini mushrooms, especially when fresh, are a coveted ingredient in the culinary world. These are perfect for making plates of scrumptiously creamy mushroom risotto and other Italian or French gourmet staples!

Continue reading to find out everything about this popular yet elusive fungi, from identifying porcini mushrooms to making sure that they’re properly stored. You might also enjoy a few recipes that we curated just for you.

What Are Porcini Mushrooms? 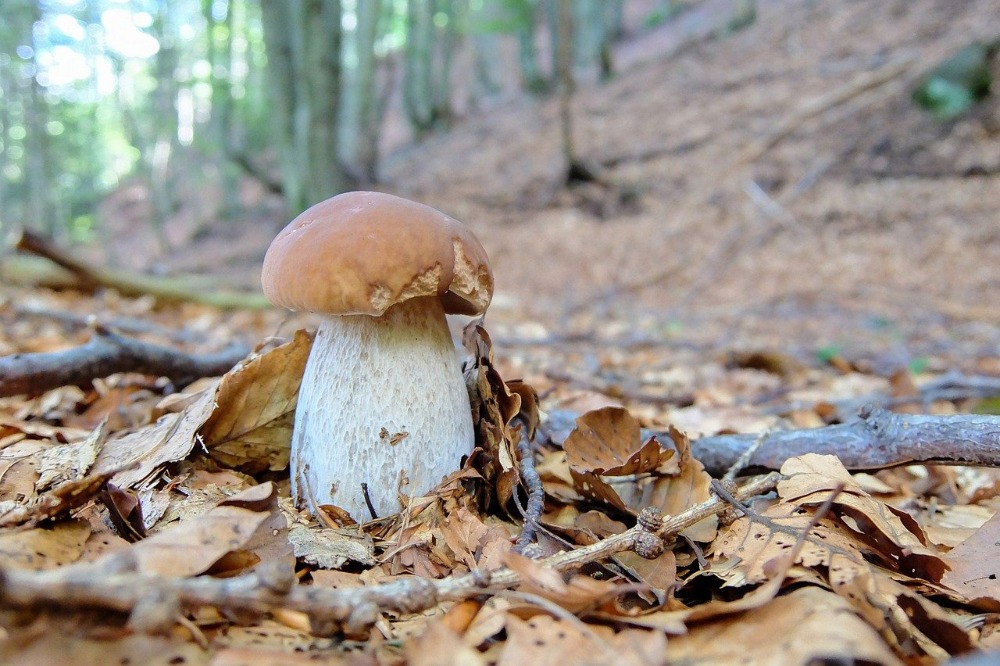 Porcini mushrooms (sometimes misspelled as porchini or procini) are among the most popular edible wild fungi globally. The scientific name of the funghi porcini is Boletus edulis, a species of the genus Boletus, which means mushroom in Latin.  This bolete mushroom goes by several other names, and some of the most notable ones include porcino, king bolete mushroom, penny bun, and cepes, ceps, or cep mushroom. It’s known internationally as prawdziwki or borowik in Polish and belyi in Russia (one of the most coveted among other Russian mushrooms).

This boletus mushroom type is mostly foraged in the forests of Europe, North America, and Russia. They grow near trees since they benefit from their symbiotic relationship. Because of this, growing porcini mushrooms for farming is difficult to achieve (although regrowth is not entirely impossible). As a result, these king bolete mushrooms often come with a hefty price tag. You can get it for a lesser price if you opt for dried versions.

When you come across different varieties of edible boletus mushrooms, you’ll notice that they tend to look similar to one another. You should know the basics for king bolete identification so that you don’t accidentally have a bite of boletus edulis look-alikes, such as the bitter bolete that has an unpleasant flavor.

The first thing you should look out for is physical mushroom characteristics, such as the tell-tale porcini color and shape. Each king bolete mushroom has a brown cap that is oversized and “bun like”, with a chunky white stem. Don’t confuse it with the closely related bay bolete which has a reddish-brown cap. 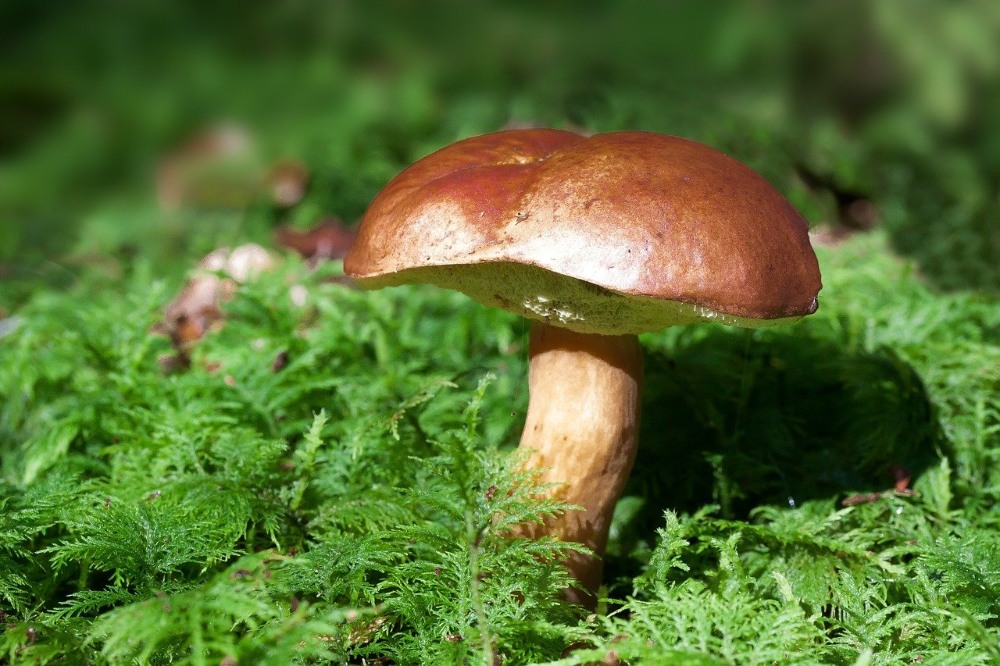 The Bay Bolete mushroom, not to be confused with the porcini mushroom

Porcini can grow from several inches up to a foot and weigh up to a few pounds. Lastly, it should produce an olive-brown spore print when you tap it onto a piece of paper. 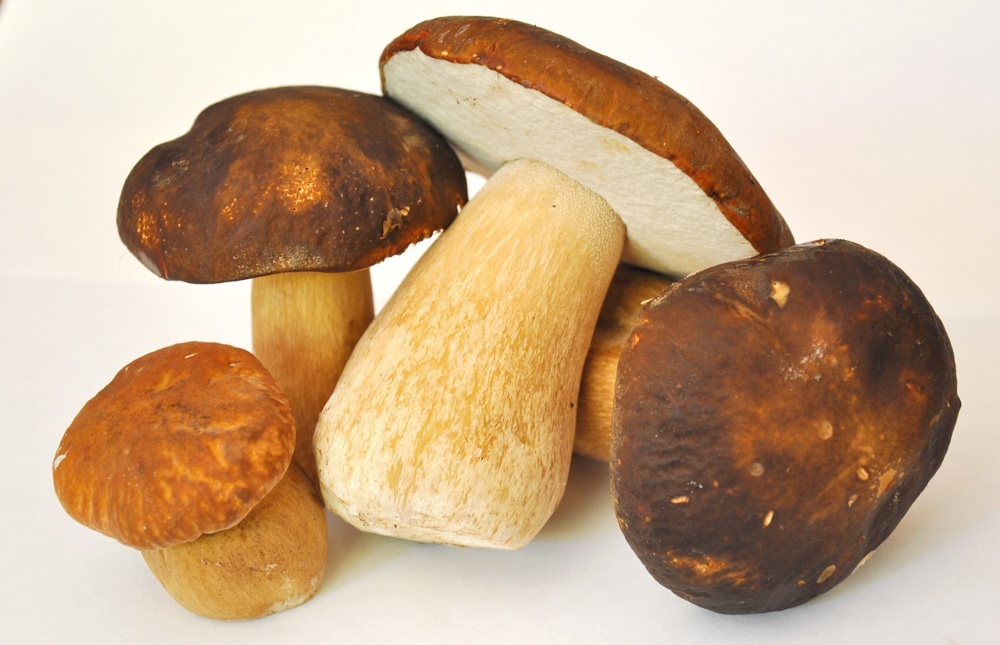 Like most mushrooms, porcini has a deep earthy, and nutty flavor. Aside from that, these king bolotes also have an umami quality to them. This, in combination with the mushroom’s meaty texture and high protein content, make it a popular meat substitute option in vegetarian and vegan recipes. Your best bet is to incorporate them into a savory appetizer or entrée for an extra layer of complexity. For a stronger mushroom flavor, we recommend using the type of porcini that is already dried.

In terms of texture, there is a stark difference between dried mushrooms vs fresh ones. Generally, ones that are freshly picked would have a noticeably meatier mouthfeel. On the other hand, dried porcini mushrooms that have been rehydrated would have a more elastic and chewier quality.

If you can’t manage to get your hands on the real thing, you might want to try using canned olive oil that has been flavored with porcinis. Aside from being a good substitute for mushrooms, this specialty ingredient makes for a good truffle oil substitute as well. You can also look into what mushroom is closest to porcini if you lean towards getting another kind of edible fungi as an alternative. Go for shiitake mushrooms for a cheaper and/or more flavorful porcini mushroom substitute. In the same vein, you can use these king boletes as a shiitake mushroom substitute as well. You can also try using more common varieties like the button, brown, cremini, pioppino, or oyster for some mushroom recipes. Although, you should note that you won’t get the same depth and flavor as what these penny buns offer.

How to Cook Porcini Mushrooms 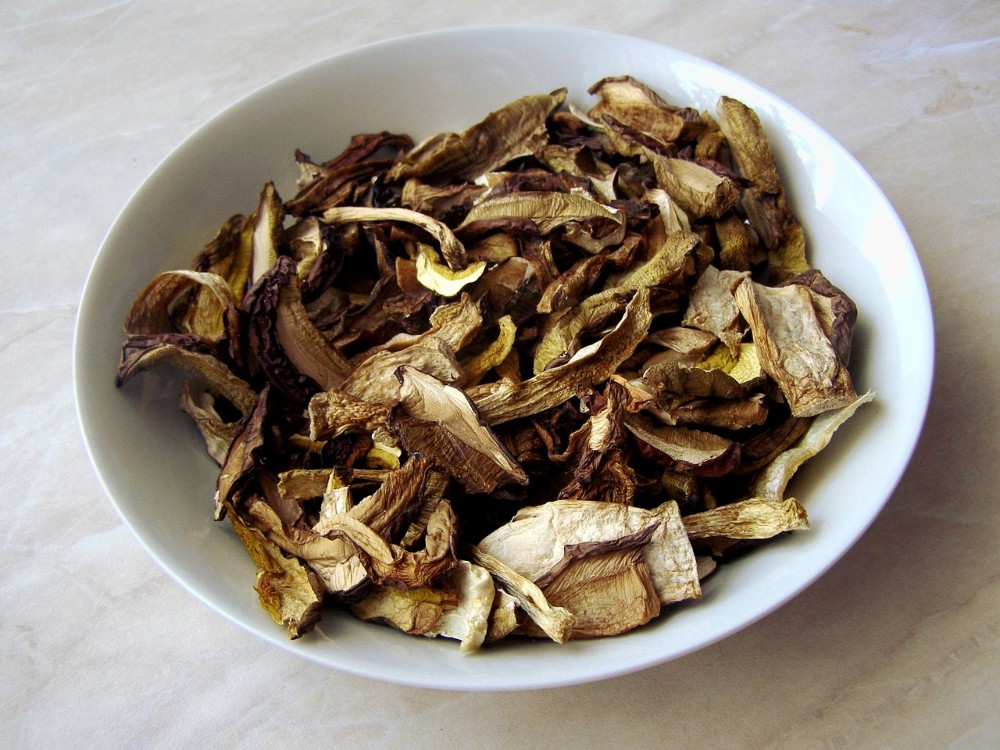 Before you start cooking with fresh porcini mushrooms, you have to prepare them first. To clean each one, simply scrub the dirt off with a slightly damp cloth or paper towel. These mushrooms are quite fragile and can easily deteriorate, so be gentle with them. Always remember not to soak them in water because doing so might ruin the texture and taste of the king boletes.

After you’ve successfully cleaned them, you may choose to cut the fresh mushrooms into pieces. It’s safe to eat their caps and stems, although they can’t be eaten raw. Hence, you should sautée, braise, fry, grill, or stew them first, ideally in medium heat. Whip up a fresh porcini mushroom recipe and serve it as a main dish for lunch or dinner, or a side dish or topping for risotto or pasta recipes.

READ ALSO: 50 Types of Pasta and Their Best Pairing Sauce

Now that you know how to prepare the fresh kind, you might also want to know how to cook dried porcini mushrooms. Reconstitute the dried porcini mushrooms first before cooking. To rehydrate them, soak them in warm or hot water for at least 15 minutes or until softened. Take them out of the water, and you’re all set for using dried mushrooms! You can also use the porcini broth for making soup or gravy. 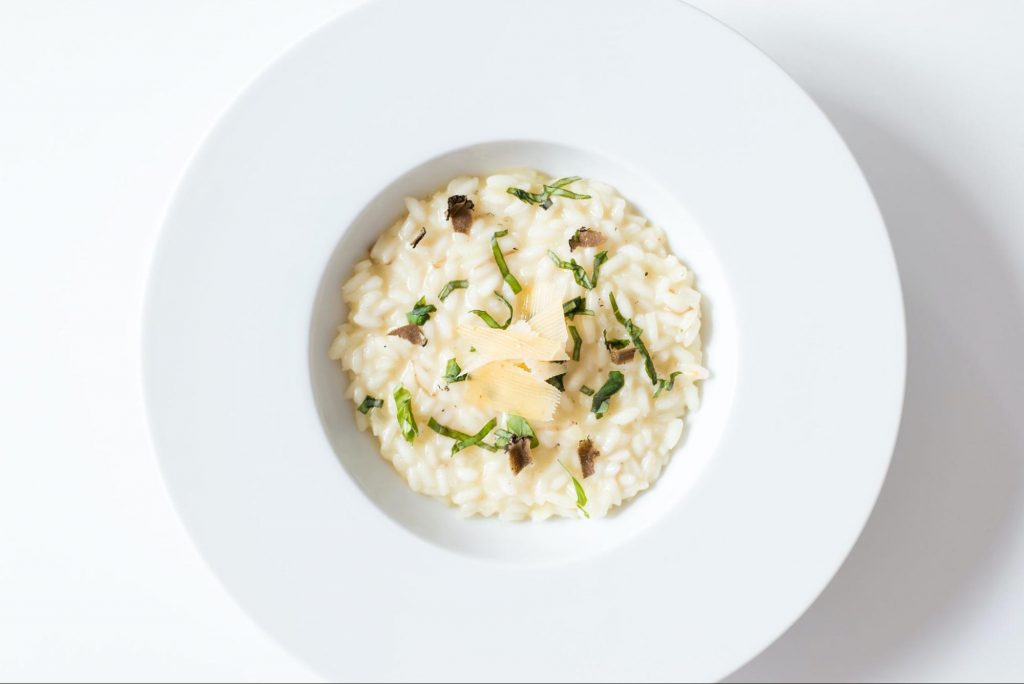 We’ve gathered six porcini mushroom recipes that you can try to recreate at home. You’ll have a good range of options, from the more traditional Italian dishes to modern vegetarian takes on American favorites. Take a look at the list below and get inspired.

Where to Buy Porcini Mushrooms 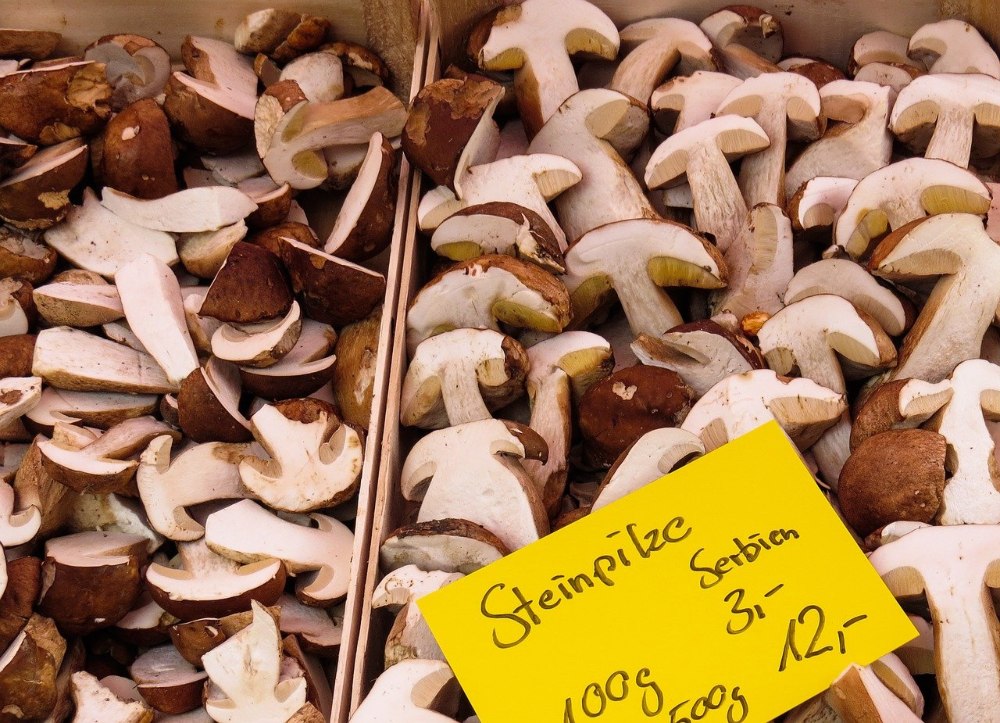 Usually, you can find and buy porcini mushrooms in a farmers market when they are in season. Your best bet is to go during autumn when they are at their peak, although the season for these spores typically lasts from June to November.

If you’re wondering where to buy dried porcini mushrooms, you should know that they’re relatively more accessible than the fresh kind. You can normally find them year-round online, in an Italian gourmet food store, or the produce section of a grocery store.

How To Store Porcini Mushrooms 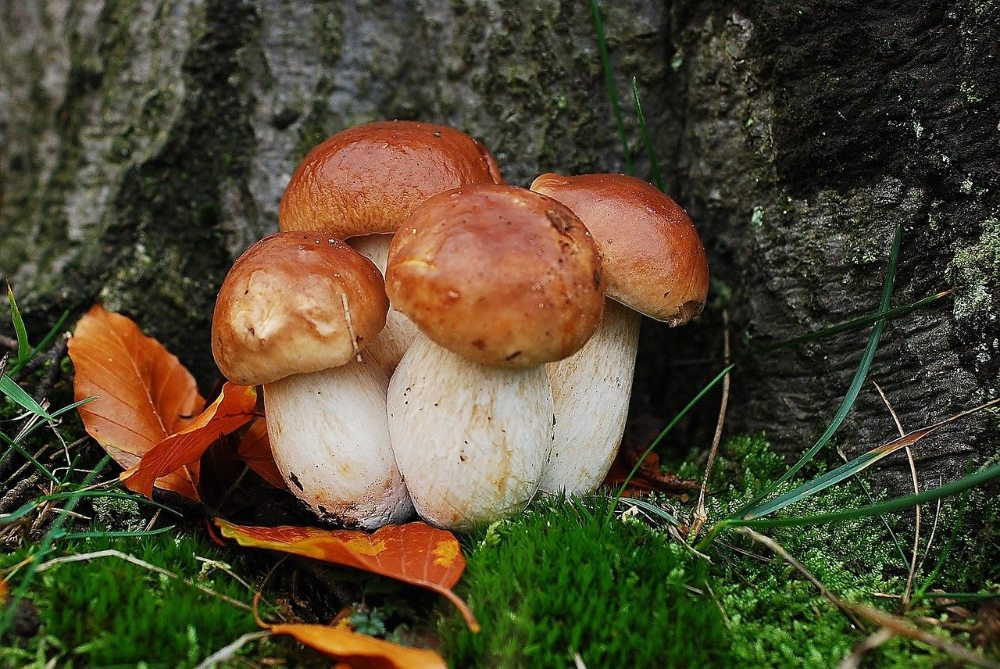 Fresh porcini mushrooms are best eaten fresh because they tend to spoil quickly. But, there are several methods you can do if you can’t consume them right away. The first one is by refrigeration. To do this, wrap mushrooms in a paper bag or towel and store them in the crisper drawer of your refrigerator. This method will keep them good for up to three days. You can tell that they’ve gone bad if they’re slimy, wrinkly, smelly, and have developed black spots.

Freezing is another method you can try. Clean them first with a damp cloth or a brush and cut them into smaller pieces, ideally in half. Frozen porcini mushrooms would be good for up to several months.

READ ALSO: Can You Freeze Mushrooms? Yes, Both Raw & Cooked!

Another preservation method you can try is dehydration. Figuring out how to dry porcini mushrooms is actually quite easy. First, clean the mushrooms thoroughly and cut each one into thin strips. Then, dehydrate them in a slightly open oven at 105 degrees F. They won’t go bad for up to six months if kept inside an airtight container that’s placed in a cool dry place.

Give Depth to Your Gourmet Dishes With Porcini Mushrooms

Now that you know that porcini mushrooms are an elusive and flavorful bunch, you’ll have all the more reasons to add king bolete to your culinary bucket list! If you’re able to get your hands on this elusive fungus, give them the treatment they deserve by serving them on luxurious dishes or use them to reinvent your favorite meals.

Read Next: Narutomaki: What Is It, How To Make It, and Recipes To Try