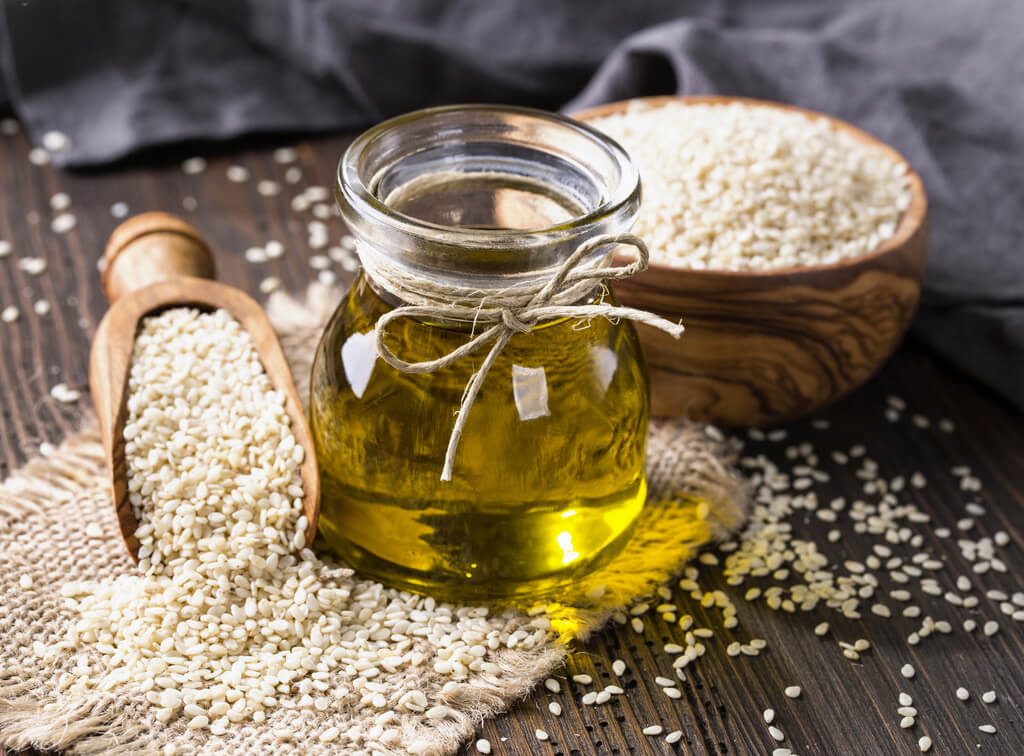 Sesame oil is known for the nutty, signature umami flavor it gives to stir-fries, salad dressings, and many noodle recipes in Asian cuisine. It’s even one of the best ramen toppings you can use! It’s that good. Seeing its many uses, we say a list of sesame oil substitute options is only fitting in case you run out of this versatile ingredient.

What Is Sesame Oil?

Notably one of the signature ingredients in many East Asian cuisines like Chinese, Japanese, and Korean, sesame oil has a deeply nutty and toasty taste uniquely distinctive to other oils and condiments. The said oil is extracted from milled sesame seeds. When it’s not roasted, the color is between white and yellow. It has a smoke point of 410 degrees F.

Now, before jumping right to sesame oil alternative choices you can use, let’s distinguish the differences between regular and toasted sesame oil in terms of appearance and flavor.

The regular untoasted sesame oil is made with raw, milled sesame seeds. It has a pale to golden yellow color and can be used for frying, roasting, and even as a seasoning. Basically, you can use this regular version the same way you use any cooking oil like canola.

The toasted version, on the other hand, is made exactly from milled sesame that’s been toasted. It has a deep amber to brown color that carries more depth in flavor. The flavor is richer with a nuttiness that’s more intense than the regular kind. But because it’s already toasted, it has a lower smoke point, making it better for finishing or seasoning dishes such as this spicy miso ramen. 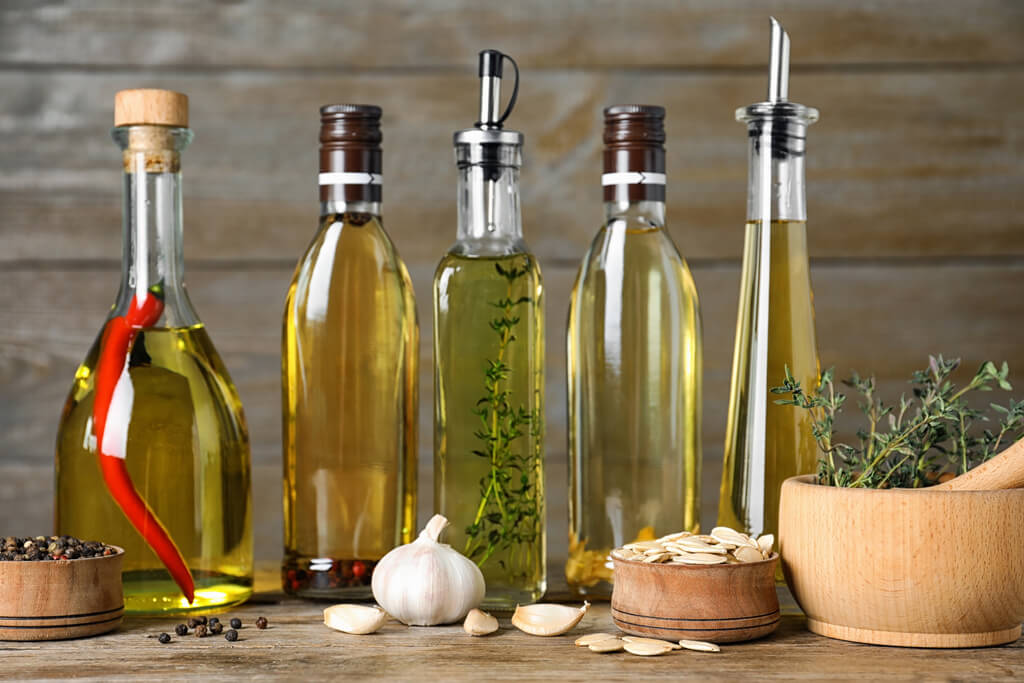 Running out of umami-packed ingredients can be cumbersome especially when the said ingredient is as flavorful as sesame oil. Good thing we have listed all the best substitutes for sesame oil that works great for toasted and untoasted sesame!

Frequently used in common households, canola is one of the most sold cooking oils around the world. Its mild and neutral flavor allows for a wide variety of uses including cooking, frying, and even baking. Because of its not too strong flavor, canola oil makes for a great sesame oil alternative. To be more precise, it’s a great replacement for dishes that don’t require a strong umami taste. And since it’s widely used in the kitchen, you can also easily find it at any grocery store.

To use as an alternative, opt for light olive oil which has a milder, more neutral taste compared to its extra virgin counterpart. Use an equal amount of olive oil in place of sesame.

For dishes that don’t feature a strong sesame taste, then coconut oil will do the trick. Like canola and olive oil, this replacement offers a mild, nutty flavor that caters to a wide variety of dishes as well. To add, it has a nutty taste which makes it a great substitute for sesame oil. However, it has a low smoke point that’s not good for frying. But in general, it’s a great flavor enhancer for salads and desserts.

Although it doesn’t exactly replicate sesame oil’s flavor, sunflower seed oil still has a nutty taste. With a high smoke point of 449.6 degrees F, it’s good for sautéing, stir-frying, and even deep-frying.

Because of its high smoke point of 510 degrees F, this oil is an ideal sesame oil substitute. You can use it for frying and baking. You’d think it taste like saffron, but it actually has a neutral and mild flavor that can easily stand in for sesame.

Known for its light flavor with subtle notes of nuttiness and grassiness, grapeseed oil is a great replacement if you’re not looking for a stronger sesame taste. This mild sesame oil substitute is great for baking, frying, and stir-fries. And because of their similar flavor profile, it’s also a great flavor enhancer for recipes and salad dressings with sesame oil.

Another great substitute for sesame oil is flaxseed oil. However, this ingredient has a low smoke point, making it unsuitable as a cooking oil. Hence, this alternative works best as a seasoning for salads, sauces, and other dishes. It has a mild, nutty flavor that can be a great flavor enhancer in place of sesame. Although keep in mind that it does have a unique, slightly peculiar taste that will make some dishes taste weird. If you’re using it as a replacement for sesame oil, you might want to conduct a taste test first, before adding it in small batches.

Although it’s not the best substitute, fish oil is a good backup, but only as a last resort because of its noticeable fishy taste and smell. Although, it’s a different story if your dish already has a fishy taste. That said, it can be used for fish recipes to add flavor. Add it in batches and adjust the flavor according to your preferences.

If you already have sesame seeds lying around, you can also try making your own homemade sesame oil. So how do you? Start by adding ¼ cup of sesame seeds and one cup of any vegetable oil (preferably canola oil or sunflower oil) in a saucepan. On low heat, continue stirring until the seeds turn brown. Remove from heat and wait until it cools down. Then using your handy blender, blend the mixture until smooth. Finally, using a fine mesh, filter and keep the oil. It will be good for up to 2 weeks when stored in the refrigerator.

Now, if you want to impart that sesame flavor but without the oil, you can also toast sesame seeds in a non-stick skillet until light brown in color. Use this as a garnish for Asian stir-fry recipes, for example. It’s not as strong as the oil variant, but it will add a nice crunch and a toned-down sesame flavor.

Also known as a sesame seed powder, tahini is a famous ingredient from Middle Eastern cuisine. Since it’s made with toasted ground hulled sesame, it can be a great backup for toasted sesame oil despite its creamy texture. It has a strong nutty and salty taste perfect for sauces, dips, and salad dressings. Because of its consistency, it’s a great substitute for frying or cooking. To achieve a thinner consistency, just dilute it with mild and neutral-flavored vegetable oils such as canola oil and sunflower oil and you’re all set!

Extracted from perilla seeds, perilla oil has a similar flavor profile to that of toasted sesame oil. It has the same nutty and earthy undertones. This alternative also has a licorice and anise finish that is best suited for salads, salad dressings, and drizzled over stir fry recipes. Simply put, it works best as a flavor enhancer.

Made from peanuts, this sesame oil substitute has a very strong nutty flavor that works best for most Asian stir-fries and noodle recipes. Its aromatic and dominant flavor functions best as a flavor enhancer. But it also has a high heat resistance that can also be used for stir-frying in a very hot wok. You can use it as a direct substitute for most recipes.

Walnut oil is sweet and nutty, but could easily become astringent when not used the right way. Because it has a low smoke point, avoid using it for frying and cooking. For a burst of nutty flavor, add it to salads, fried rice, and roasted fish. There’s a catch though: walnut oil is pricey. So if you want to save cash, opt for the expeller pressed rather than the cold pressed kind.

Avocado oil is a great substitute in terms of taste and texture. Thankfully, it also has a high smoke point which you can use for both cooking, frying, as well as an additional flavoring for many dishes. Speaking of flavor, this replacement is not packed with umami but adds a creamy, buttery flavor to salads, salad dressings, roasted fish, and more.

Just like sesame oil, almond oil also has a unique rich taste that adds flavor to dishes. However, unrefined almond oil does not do well with high heat, so avoid using it for frying and cooking. Instead, use it as a flavor enhancer. Its toasted nutty taste blends well with salads, fish, vegetables, and some soups and broths. If you want to use it for cooking, then opt for the refined version.

If you like adding sesame oil to your dish because of its healthy fat content, then clarified butter is your best alternative. But what exactly is it?

Clarified butter is milk fat that’s separated from milk solids and water. In other words, it’s pure butterfat. Because of the clarifying process, the butter has a more intense buttery taste that adds flavor and depth to a dish. This variant also has a more intense salty taste that mimics the umami flavor of sesame oil. It’s best used as a flavor enhancer to stir fry recipes. 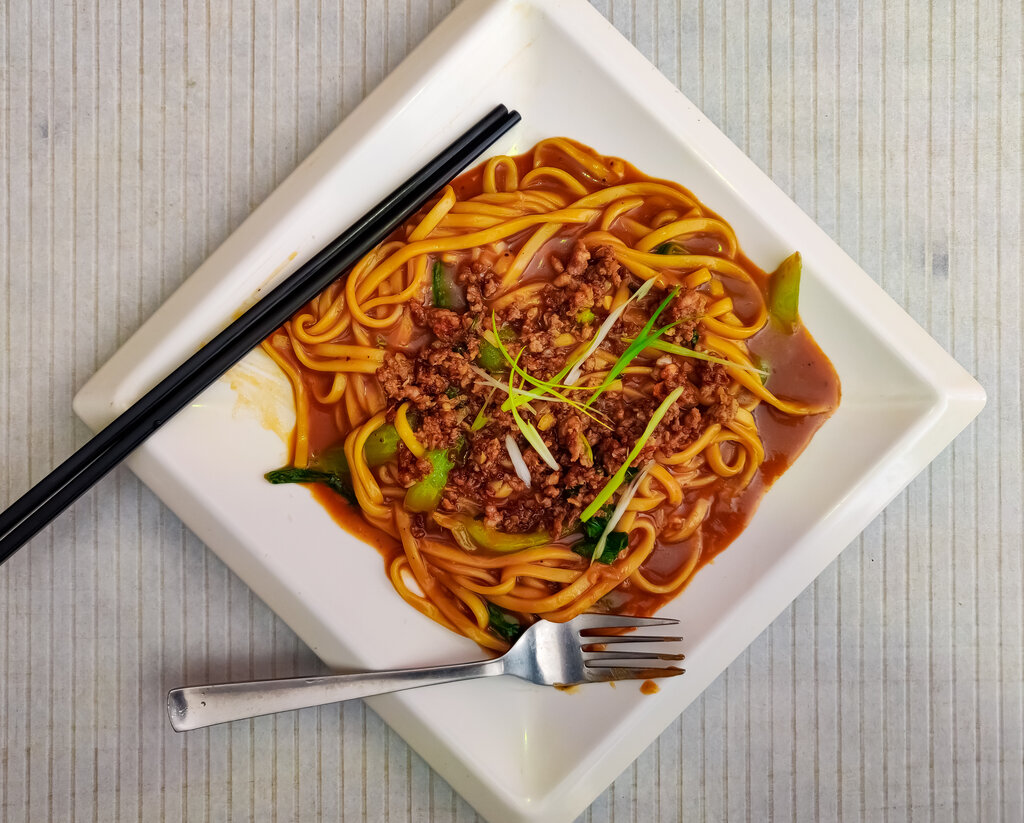 Sesame oil, without a doubt, imparts a wonderful flavor that elevates any dish. It has a strong aroma and taste that is often used as a finishing touch to most dishes. So no need to wonder where you can use it in case it’s your first time trying this ingredient! Start with these recipes that offer bold, enticing flavors:

Sesame oil is more than just a cooking oil. Plain or toasted, you can use it to add a touch of signature umami you love to your favorite Asian dishes. In case you find your pantry absent of said ingredient, you can use these substitutes for sesame oil and give your meal the savory taste you’ve been looking for!

Read Next: 16 Best Dijon Mustard Substitutes to Jazz Up Your Cooking