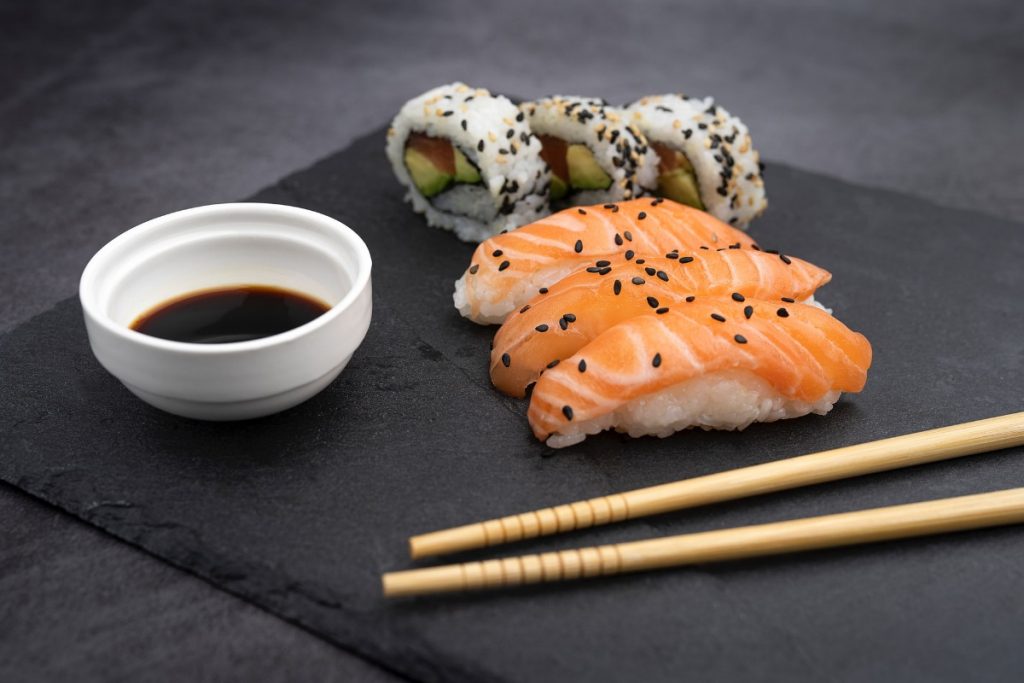 Nigiri vs Sashimi vs Maki: How Exactly Are They Different?
Table Of Contents
'

Sushi bars are a great hangout or dinner spot, especially if you’re a fan of Japanese cuisine. These establishments offer a good range of food options to choose from, and nigiri is one of them. Interested? Continue reading to find out what exactly this kind of sushi is, including its different types and how it differs from other popular sushi joint staples like sashimi and maki.

What is Nigiri Sushi? 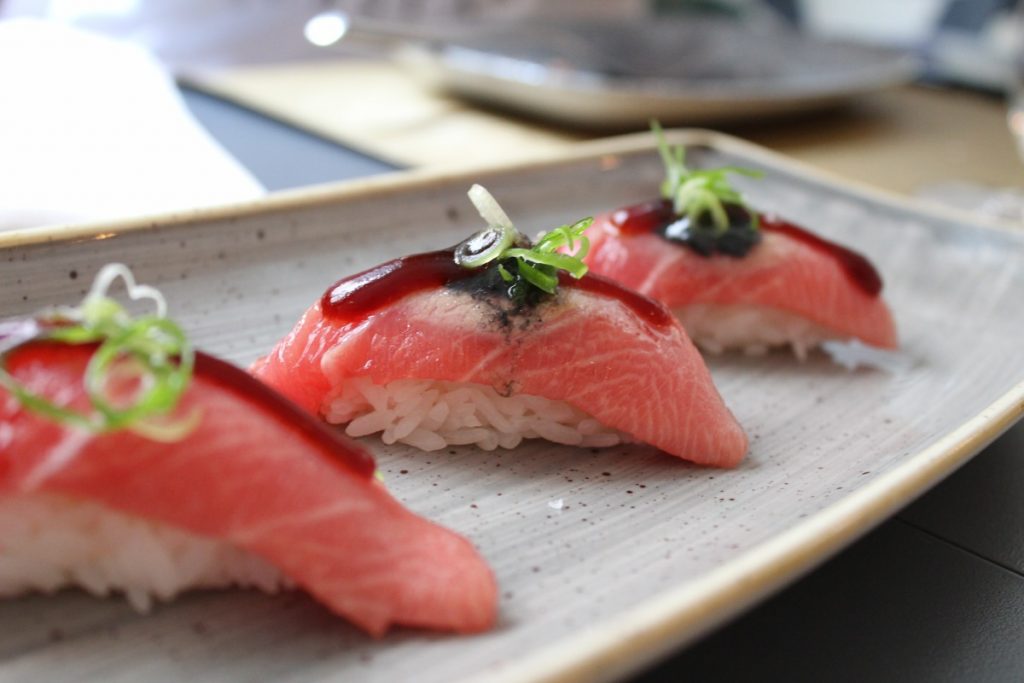 Nigiri (pronounced as nuh-gee-ree) is only one of the many different types of sushi, a popular Japanese dish that consists of cooked short-grain rice and a piece of protein. Usually, the protein used is fish. However, contrary to popular belief, sushi doesn’t only need to be made of fish, like this vegan rendition of raw zucchini sushi rolls. It also doesn’t really matter if this component is raw or cooked. In fact, cooked sushi rolls also exist. It only matters that the rice holds up to the standards of this regional cuisine. The traditional way is to flavor it with sugar, salt, and rice vinegar (or other variants). After all, the meaning of the name “sushi” comes from a combination of archaic Japanese words that mean “sour rice.”

READ ALSO: What Is Oshinko? Learn All About It and How To Make Oshinko Roll

In particular, nigiri consists of a small amount of hand-pressed vinegared rice ball. Sushi chefs often use the index finger of their left hand to achieve the desired shape. This method is actually reflected in the name of this sushi type since it comes from the Japanese term nigirizushi which roughly means “gripped rice.”

A thinly sliced piece of raw fish, like salmon or tuna, is a standard topping for nigiri. These are safe to eat because only special types of fish that can safely be consumed without cooking are used for this dish. Nonetheless, the toppings can also be cooked beforehand, like aburi salmon which is pan-seared. Rice-fish combination is the most common, but like previously stated, sushi chefs can use other types of protein too. Nigiri is often served as a type of sushi without seaweed. Have it with pickled ginger, wasabi, and soy sauce for a complete gastronomic experience!

Although nigiri often has a fatty fish component, this shouldn’t be a cause for concern. In fact, most types of sushi can be good for you if eaten in moderate amounts (roughly one to two servings per week). In particular, fish-based sushi contains omega-3 fatty acids with anti-inflammatory properties that help promote heart health. Note that each serving of nigiri also amounts to 134 Calories.

Nigiri vs Sashimi vs Maki: The Differences 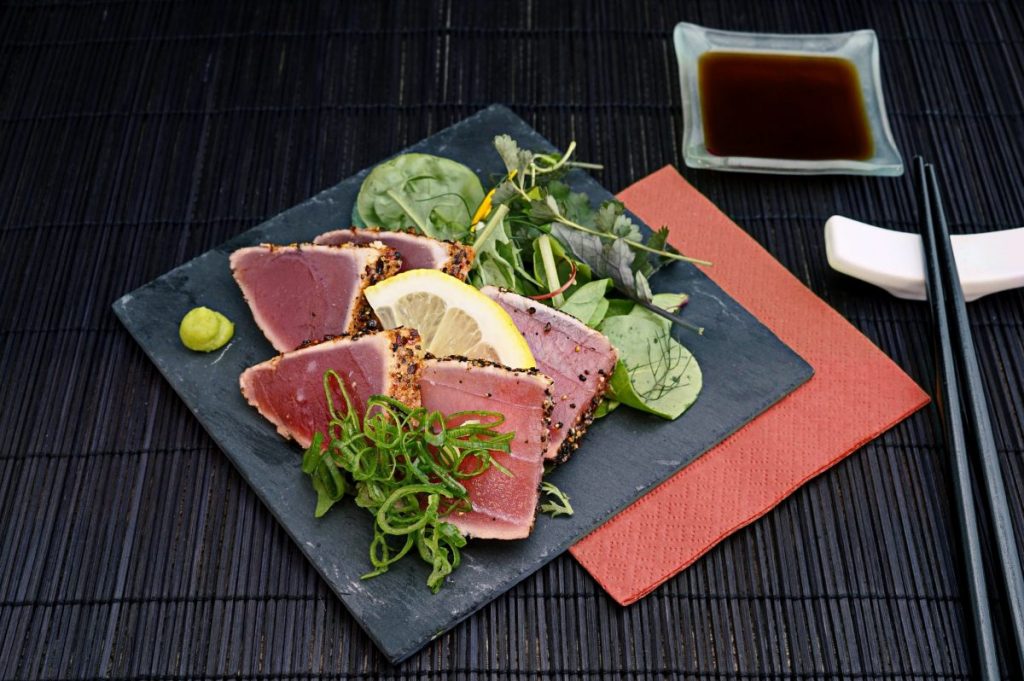 A lot of people tend to confuse these two. So in this section, we’ll be breaking down the main differences between sashimi vs nigiri.

The most crucial fact that you should know is that nigiri is a type of sushi, whereas sashimi isn’t. And, the sushi vs sashimi debacle can easily be untangled by understanding that the latter doesn’t have a rice component.

So, what is sashimi exactly? Sometimes misspelled as shashimi or sashami, this dish is like sushi without rice since it only consists of thinly-cut pieces of raw protein. This makes sense since its name is Japanese for “sliced body.” Although sometimes, these pieces of meat can be lightly cooked (tataki) for better flavor, as in these tuna steaks with ginger glaze.

READ ALSO: The Debate Between Fish And Meat – Is Fish Meat?

Different types of sashimi are available, ranging from raw fish to meat-based ones. Sashimi-grade salmon (or other types of fish), shrimp, and even horses can be used. Since it’s like a “riceless sushi” dish, you can expect that sashimi calories are typically lower than those with rice. 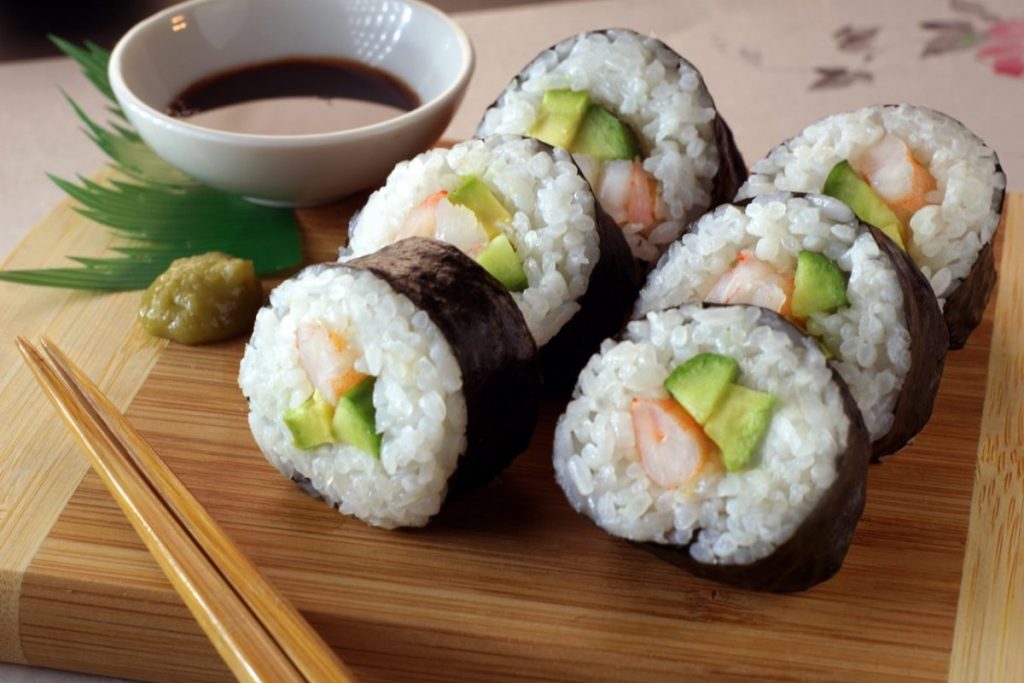 Before everything else, what is maki? These are sushi rolls that consist of vinegared rice with a fish and vegetable filling that can either be raw or cooked. They often have a nori or seaweed wrap. Plant-based maki sushi without fish is also available.

So, how does nigiri compare to maki rolls which is another one of the many sushi types? Technically speaking, the former is hand-pressed whereas the latter is rolled. 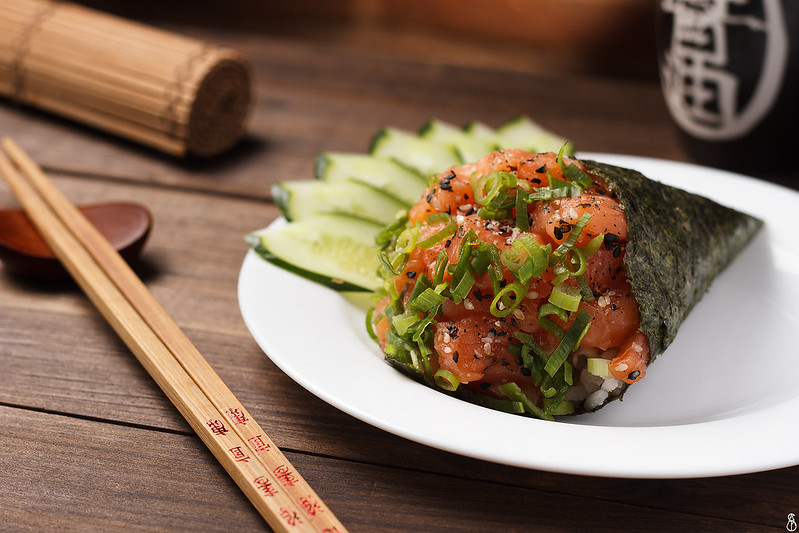 However, you also shouldn’t confuse makis with other types of sushi rolls. For one, it’s different from a hand-rolled temaki. Telling them apart won’t be much of a problem because there is a stark difference in the appearance of a maki roll vs hand roll. The former is cylindrical and cut into pieces, whereas the latter is cone-shaped. 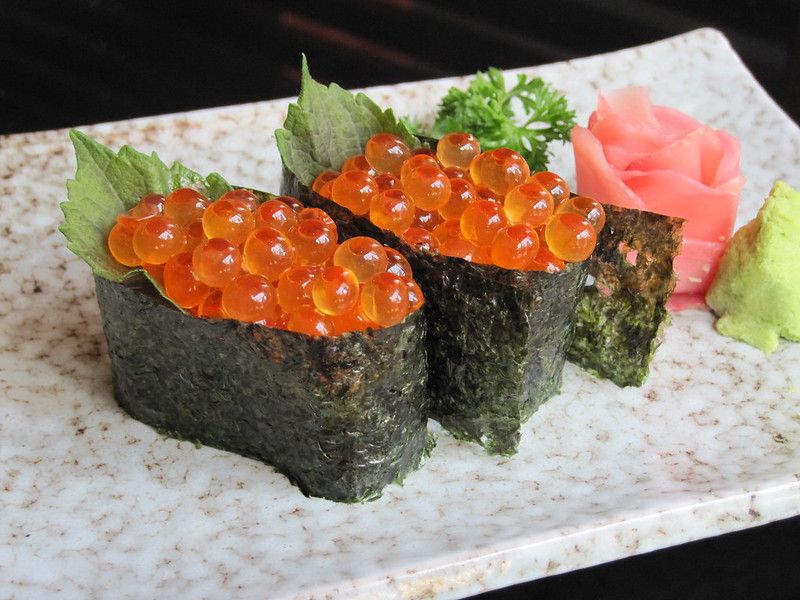 A maki roll is also not the same as gunkan maki, a hand-shaped nigiri with a nori sheet wrap. You can easily spot their difference by looking at the location of the protein. If it’s on top, it’s probably a gunkan maki nigirizushi.

READ ALSO: Narutomaki: What Is It, How To Make It, and Recipes To Try 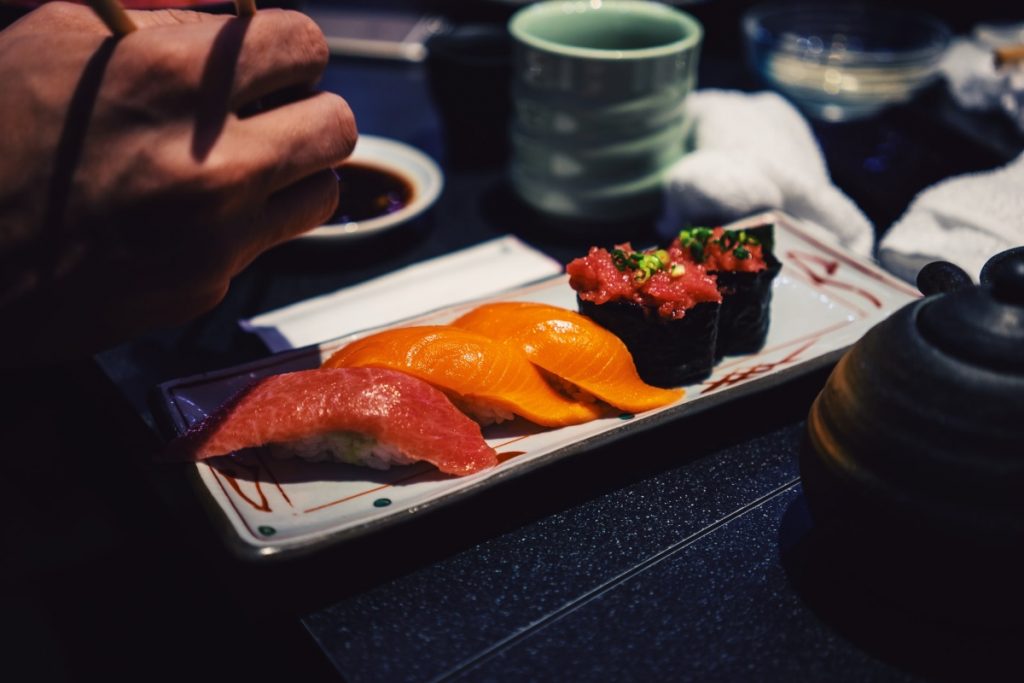 Japanese restaurants can serve all kinds of this hand-pressed sushi.

Starting with seafood favorites, sake nigiri (salmon) is among the most popular options to get. It consists of vinegared rice with a thin slice of pinkish fatty fish on top. This has a mild taste, and it offers a buttery and melts-in-your-mouth sensation with each bite. Maguro nigiri (tuna) is another beginner-friendly crowd-pleaser because of its mild flavor.

Meanwhile, hamachi nigiri (yellowtail) takes the seafood flavor up a notch with its bolder and fishier taste. Likewise, saba nigiri which is made with cured mackerel is another excellent strong-flavored choice. And unagi nigiri (eel), served with cooked fish, offers a sweet and flaky experience.

Veering away from the fish-based types is ebi nigiri (shrimp) which may either be served with fresh or frozen prawns. Hotate (scallop) also offers a satisfying combination of sweet shellfish and tangy rice.

For gunkan maki types, there is ikura nigiri roll which has a salmon roe topping. These fish eggs act as bursting pockets of mildly fishy flavor with each mouthful. Masago nigiri is somewhat similar, although it consists of smaller smelt roe. These are mildly salty and smoky, with a crunchier texture.

There are also non-seafood options such as tamago nigiri (with egg), inari nigiri (with tofu), and even avocado nigiri. Feel free to experiment with these different flavors, and figure out which suits your palate the most!

The bottom line is that preparing the vinegared rice in nigiri is different from other types of Japanese sushi bar options. It’s hand-pressed, whereas maki is rolled and sashimi doesn’t have rice at all. So the next time you visit your favorite sushi place, you can easily tell apart which Japanese dish is which!

Read Next: 27 Delicious Indian Dinner Recipes You Have to Try

15 Traditional Greek Desserts You Should Try

What Is Salami? Everything You Need to Know