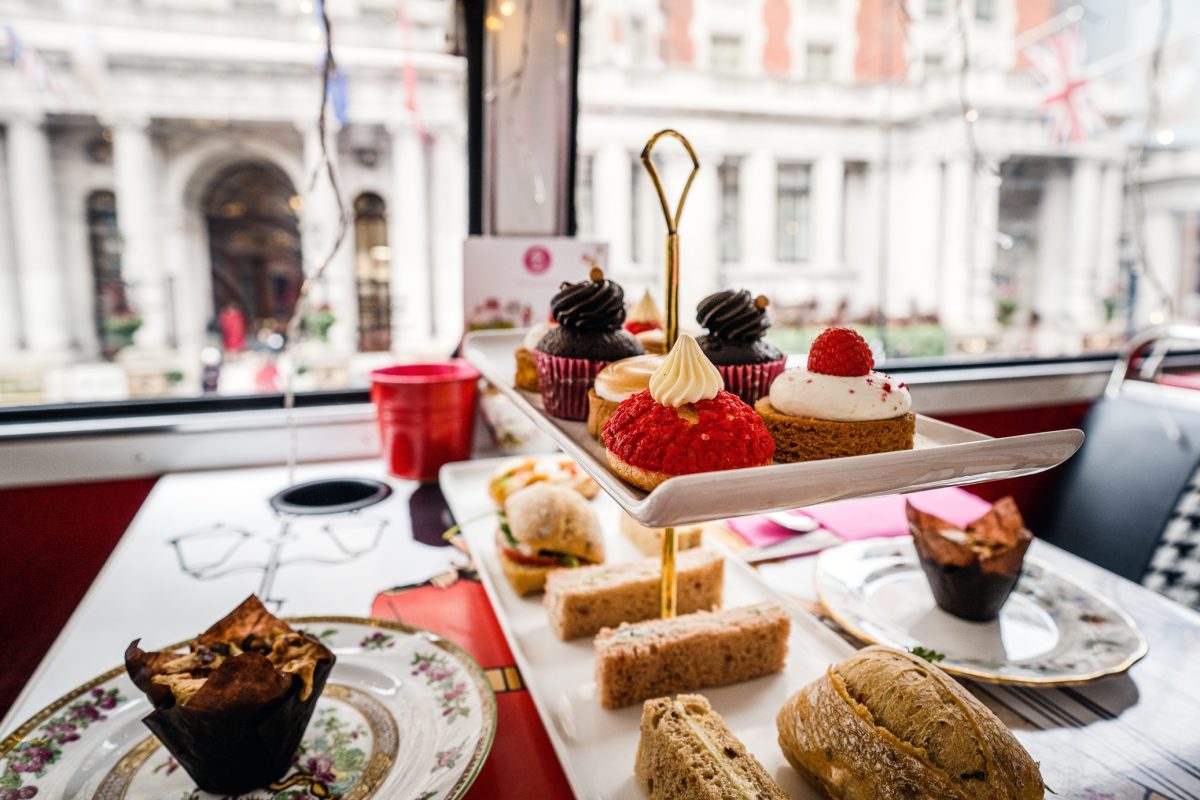 When someone says “high tea” or “afternoon tea”, chances are they’re confusing the latter for the former. However, we’re here to show you how different the two British culinary traditions actually are!

Nowadays, when it comes to tea drinks, the first thing that probably pops up in people’s minds is boba tea. They may be delicious, but there’s so much more to it than just the popular, contemporary versions we know now!

In fact, it has such a long history, and there are many traditions associated with drinking it all around the world. But the most famous is probably from the United Kingdom. And yet most still do not fully understand its true history and meaning.

Indeed, if you don’t come from the United Kingdom, whose people love drinking this classic beverage so much that they drink it as much as, if not more than, water, then you might not know what high or afternoon tea is. Many confuse the two, but they are actually two distinctly different traditions.

Both have different histories from one another, are taken at different times of the day, and are eaten with different types of food.

So, grab your kettle and make yourself a cuppa warm, comforting Earl Grey. Let’s dive into the intricacies of high tea vs. afternoon tea!

Brief History of Tea: How Did This Drink Come to Britain? 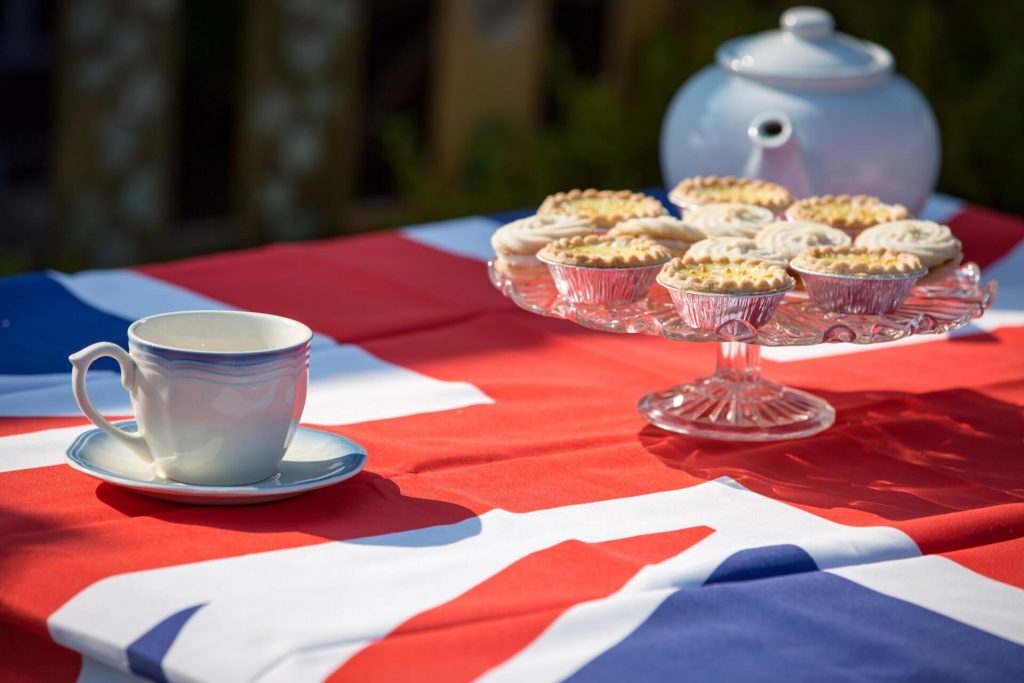 Before we fully understand the difference between afternoon and high tea, let’s first get to know the brief history of English tea.

Like ice cream, alcohol, and ketchup, many food historians trace the origins of tea all the way back to Ancient China. The plants were notably planted all over China, Tibet, and even Northern India. It was also Chinese trade that spread this classic drink all over the world, from Japan to Portugal and, finally, the rest of Europe.

Initially, a Portuguese missionary first introduced the brew to Europe while he was traveling back and forth to his home country and China. However, it was the infamous Dutch East India Company that finally unleashed the wonders of this drink to London and the rest of the West.

The British didn’t fall in love with tea immediately. In fact, many initially preferred coffee drinks to this new, relatively unknown beverage. But it didn’t take long before the English came to love it all the same. Suddenly, London cafes and coffee shops were selling the drink, and a certain Portuguese royal, Catherine of Braganza, loved the drink so much she introduced it to court.

What is Afternoon Tea? What Time Is It Served? 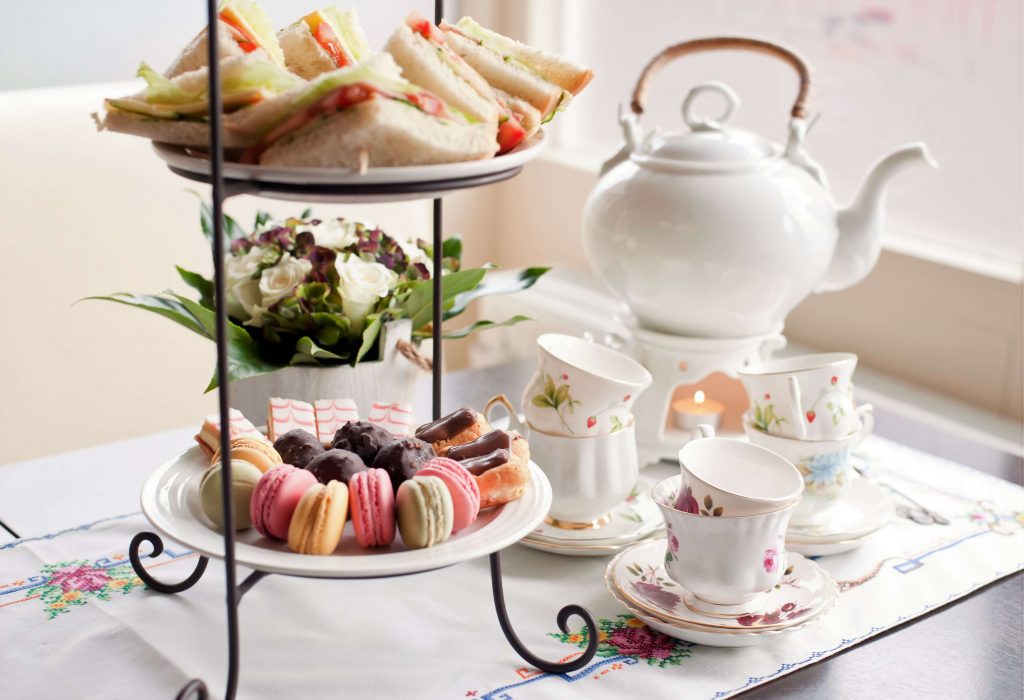 Afternoon tea is basically a British tradition of drinking tea and eating snacks like sandwiches, scones, and cakes, at around 4 PM in the afternoon.

You can attribute its concept to Anna Maria Russell, the Duchess of Bedford. During the early 19th century, the hours in between a mid-morning lunch and dinner were quite long. Thanks to the introduction of kerosene lamps to wealthier households, it became the norm to serve dinner as late as 8 PM in the evening.

At the time, the Duchess reported a “sinking feeling”, likely due to fatigue from not eating for so long. Not wanting to starve, Anna started to invite her friends over for a cuppa and some snacks. This wasn’t to replace dinner, but to fill in the gap between the only two main meals of the day.

Eventually, the idea of afternoon tea caught on and turned into a fancy social event. It spread all across high society and became a routine thing ladies did to pass the time. Until now, the British practice this tradition, as much as they do elevenses.

However, recently, most people don’t have the time to sit down and enjoy a warm cup of Lemongrass Tea and Cranberry Scones like the Duchess and her friends used to. That’s why, in more recent times, the British mostly observe this tradition only during the holidays or on certain occasions as a treat.

Still, it remains to be a quintessentially British tradition that you can even do at the Ritz in London to this day.

What To Serve At Afternoon Tea? 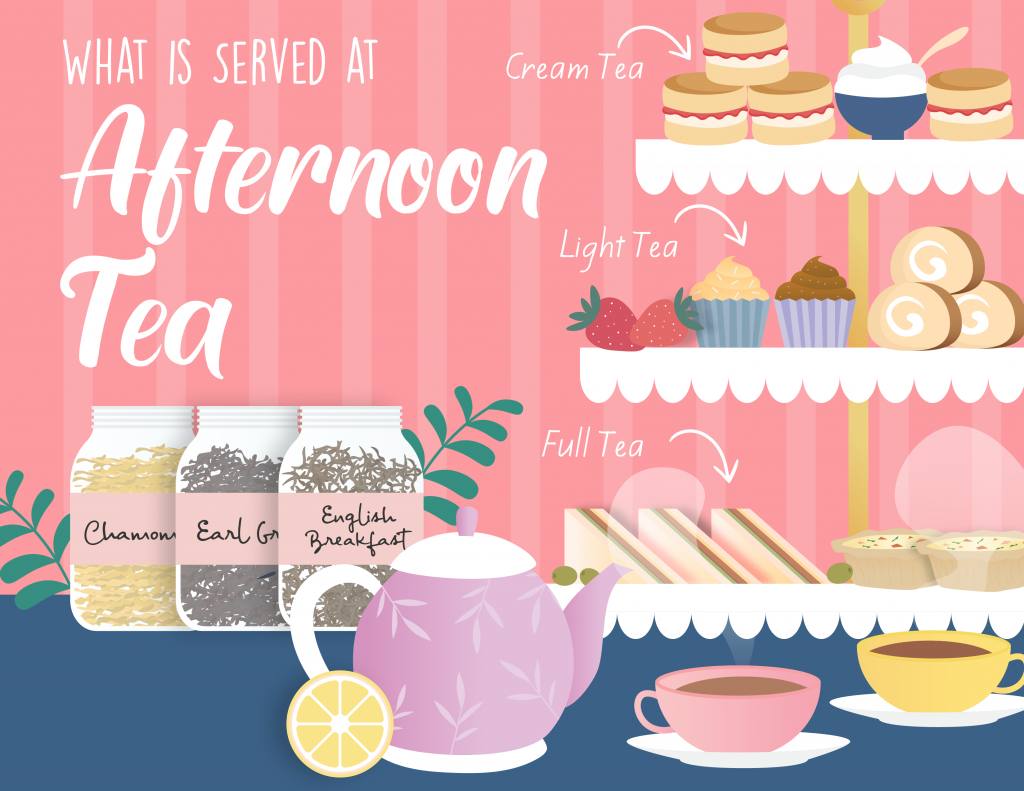 There are many kinds of ways to serve afternoon tea. The most basic variation is called cream tea, which is served with jam-filled scones, and cream. Another is light tea, which has even more sweet treats like dainty cakes and biscuits. Lastly, add more savory finger foods like finger sandwiches and mini quiches and you get full tea.

A cup of Earl grey, an English Breakfast, and chamomile are just some of the kinds of drinks enjoyed during this social event. A cuppa is generally served with milk and sugar. Although, it’s sometimes served with lemon slices for those who prefer it without milk.

You can have your own version in the comfort of your home with our suggested recipes! Make some Chamomile Spiced Tea to go with Basic British Scones and cream.

For light tea, add Berries with Banana Cream for more sweets. And for full tea, enjoy some Creamy Tomato and Egg Bruschetta.

What is High Tea? 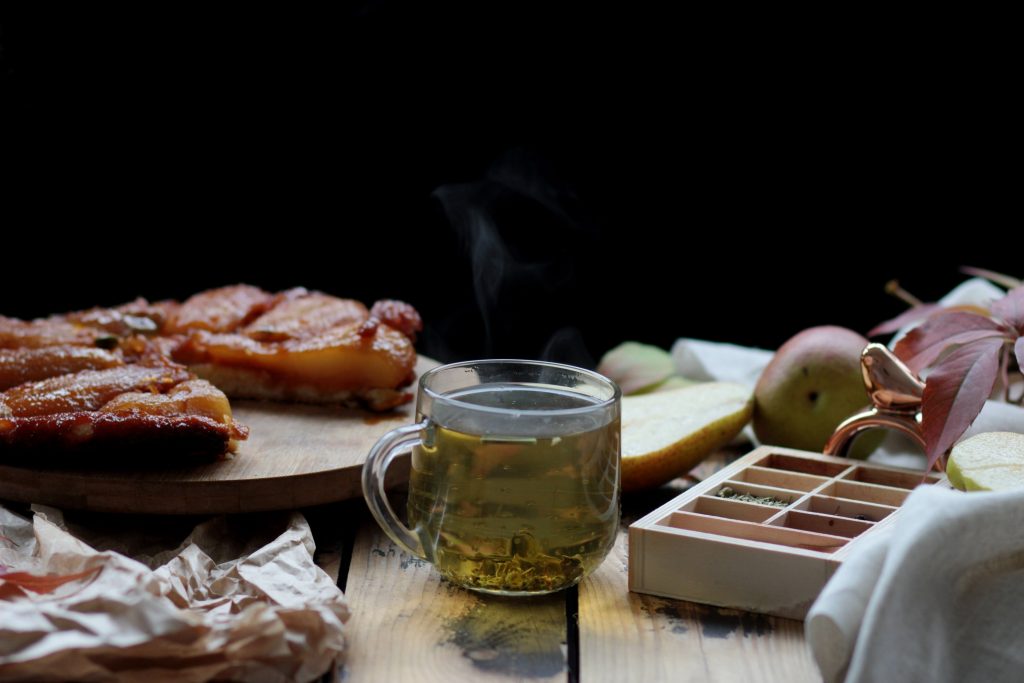 Now that we know what afternoon tea is, what does high tea mean?

While the former was originally observed by the upper class, the latter tradition was historically practiced by the working class. Back in the old days, British workers didn’t yet have a lunch break at work. So, high tea came about when workers had a cuppa along with heavy meals at around 5 PM in the evening. This was the time when workers of the newly-industrialized Britain got off a long, grueling day at work.

The word “high” in its name probably comes from the fact that this tradition was usually done on an actual dinner table. These dinner tables were relatively “higher” than the usual, low armchair or couches that upper-class people sat in to relax.

What Is Served At High Tea? 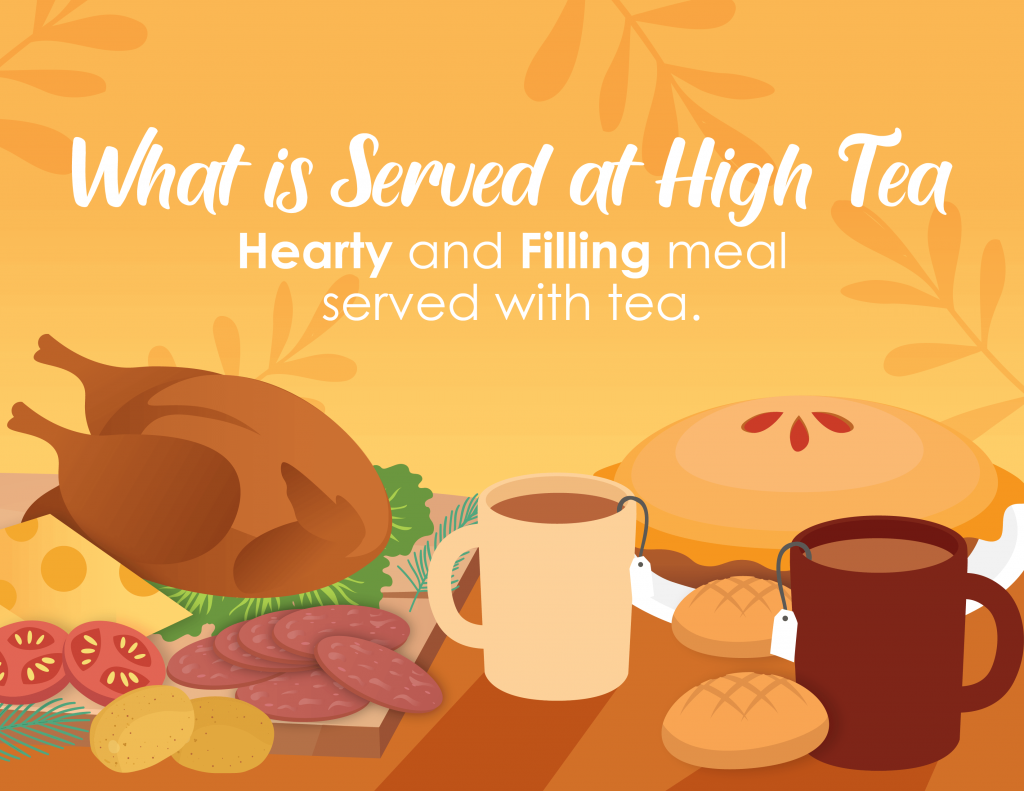 Since workers were coming home from a long day of hard labor, the meals in this tradition were usually hearty and heavy. The food they had alongside their warm brewed drinks were meaty dishes. This included cold cuts, chicken, steak, kidney pie, or even cheese and salmon. They also served filling vegetable dishes like boiled potatoes, onion cakes, and baked beans. Baked goods, like crumpets, were also present during this tradition.

Of course, a fresh brew of hot tea was the main star of the show. This warm cup revived the spirits of tired workers after a long day of working manual labor.

Nowadays, people practice this tradition from around 5 PM to 7 PM in the evening. However, some households also refer to the food usually comprising it as “evening supper” nowadays.

You can also enjoy your own high tea at home! To liven up your spirits, try a cup of Ginger Cinnamon Tea. For a filling evening supper, try a plateful of Pork Steak with Seasoned Potatoes and Mouth-Watering Red Beans and Rice. We also have an Easy Shepherd’s Pie Recipe you might want to give a try.

What Is Their Difference? 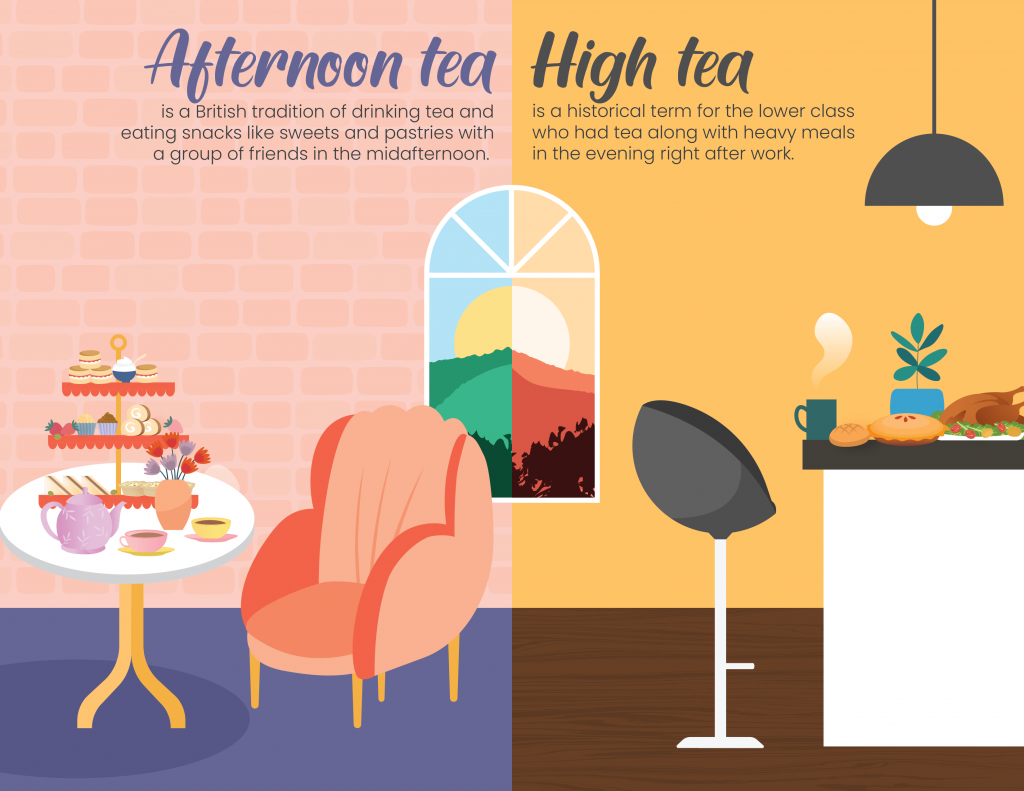 Now that we know what afternoon and high tea are, it’s easier to show how different the two are.

Afternoon tea used to be practiced by royalty or upper-class people. It was held at around 4 PM in the afternoon, as a snack to fill in the long gap between a mid-morning brunch and late evening dinner. It also became a social affair for the ladies of the court. They served light dishes, like desserts and pastries in this tradition. People would also enjoy a warm cuppa and meals in low, comfortable armchairs, couches, or parlor chairs. These low chairs were usually placed in the parlor or garden and were made for relaxing. Because of this, it is also known as “low tea”.

Meanwhile, high tea was done by the British and Scottish working class. It was served after the workers’ shift, around 5 PM to 7 PM in the evening. It acted as a sort of “evening supper” for the hungry working class who did not have lunch breaks during their working hours. Because of this, they served hearty meals like pies, meat, potatoes, and cheese along with a warm cuppa. The food would be served at the ‘higher’ dinner tables and chairs, hence its name.

Why Do People Confuse Them?

British people have a clear understanding of what they are. After all, they are served at different times of the day, and are accompanied by distinct kinds of food. But why do others confuse high tea for afternoon tea?

The answer has to do with marketing. Because many regard the former as fancier sounding, luxury restaurants and hotels market their afternoon tea as “high tea”. This is still done even though the two are opposites of one another.

The next time you see it served on a menu, try to take it with a grain of salt. They actually mean afternoon tea with its light snacks, rather than the real tradition with its heavier, filling meals.

High tea and afternoon tea are two terms that are often confused for one another when used in conversation. However, the two traditions are definitely different, with each their own interesting history. Now that you know the difference between the two, maybe you’d like to have a warm cuppa with loved ones?

READ NEXT: Cooking with Beer: 10 Beer Recipes To Try 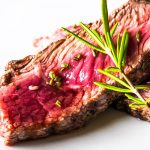 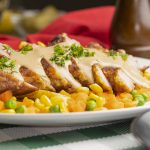 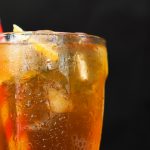 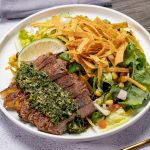 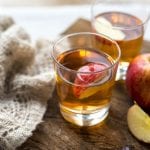 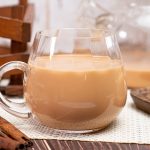 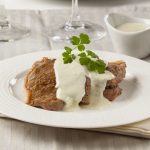 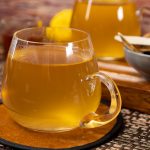 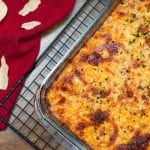 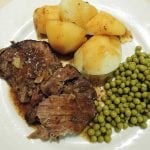 Crockpot Steak and the Works Recipe 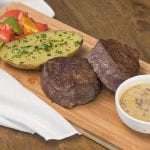 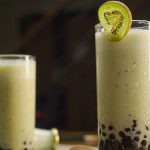