Gelato vs Ice Cream? Sorbet vs Sherbet? What are the differences between these frozen desserts? They may look similar, but food lovers know they are far from being one and the same. When you’re out and about under the hot sun, nothing beats a scoop or two of some cold ice cream. There’s a lot of flavors to pick from. There’s classic vanilla, delectable chocolate, and even sweet strawberry. Stores even offer toppings like fruits, nuts, cookies, and more.

But is it really ice cream? Maybe you’ve stumbled into a shop that sells gelato, or sorbet. For all you know, all they have is frozen yogurt! How are these icy desserts different? Yes, they could be made with different ingredients. They could even be prepared in different ways. But do they even taste different? How do you tell them apart?

Good news! We have the answer to your icy-burning questions. So let’s dig in deep into the many kinds of cold desserts we love eating when it’s sunny! 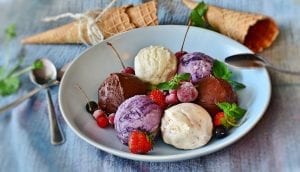 Perhaps the most famous of all the cold treats is ice cream. It’s loved by many people all over the world, making it a classic dessert. It also has a long and diverse history. The very first ice cream-like recipe emerged in China, all the way back in 200 BC. And years later, the very first version of ice cream was first served to a King in China, in 618-97AD.

What Is Ice Cream Made Of?

What separates ice cream from the other frozen desserts in this list are its ingredients and the way it’s made.

Generally, ice cream is made with milk, cream, sugar, and flavorings. However, some companies use sweeteners, non-dairy milk products, skim milk, and other variations of the classic recipe.

All these ingredients are mixed together and frozen, all at the same time. This process gives ice cream its foamy and creamy texture. And to make its texture consistent, stabilizers–like gluten–are also added, albeit in smaller amounts.

How Is Ice Cream Different From Other Frozen Dessert?

The only distinction between ice cream and other sweet treats is that it contains at least 10% milk fat, and is churned during freezing to achieve a creamy and smooth texture.

Ice creams come in an array of different flavors to choose from. There are classic ice cream flavors like chocolate and vanilla, but experimental ones like ghost pepper-flavored and lobster-flavored also exist. 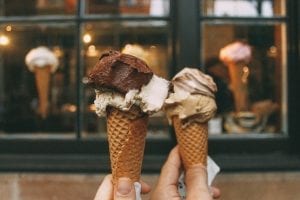 Gelato is an Italian dessert and another variation of ice cream. Its modern version can be credited to Italian chef Francesco Procopio dei Coltelli. The Italian chef first introduced this frozen dessert to Europe through his Café Procope which was based in Paris.

What Is Gelato Made Of? Ice Cream vs Gelato

Gelato is considered as ice cream’s European cousin since it’s made with most of the same ingredients as ice cream. It does, however, contain less milk fat and sugar compared to ordinary ice cream.

Churning is also part of the process in making Italian gelato but it churns the air much less compared to ice cream. This gives gelato a denser texture, but also a soft and glossy look. This makes it creamier than its American cousin.

What is the difference between gelato and ice cream? Gelato is less frozen than ice cream. This means that it’s served at a warmer temperature, to keep its soft texture and mold. If you want to take gelato to the next level, we suggest trying our Affogato Recipe. With this recipe, you can enjoy the heavy, creamy taste of vanilla gelato swimming in hot espresso coffee. It’s the perfect dessert for those who want a caffeine kick just after finishing two scoops! 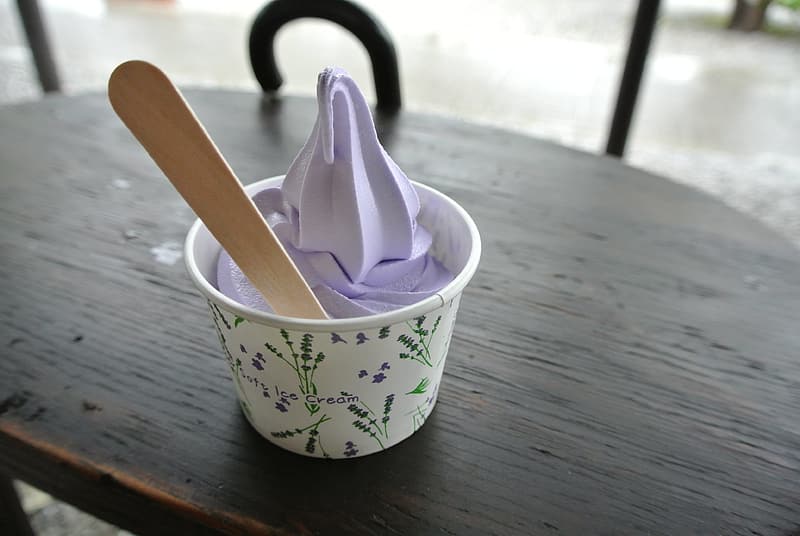 What is soft serve ice cream? Soft serve is also known as soft ice cream because it’s softer and less dense than your usual ice cream. Two popular American ice cream giants, Carvel and Dairy Queen, have fought through the years claiming to have invented this icy treat back in the 1930s. Still, it’s gone a long way since and has become so popular that it’s served in fast food chains, amusement parks, and even carnivals. Also, soft serve being less full than ice cream never affected the eating experience foodies have with this frozen dessert.

What Is Soft Serve Made Of?

Soft serve is just the soft version of regular ice cream. It’s made with the exact same ingredients, only it’s produced using a different machine.

However, it’s important to note that while soft serve also has milk fat, it’s generally a lower amount than that of an ice cream. It only has 3% to 6%, compared to ice cream’s 10% to 16% of milk fat.

The main difference between the two lies in how soft serve is made. With a soft serve ice cream machine, more air is used. The end result is a frozen dessert that’s softer, smoother, and lighter than normal ice cream. It’s also stored at lower temperatures than ice cream. 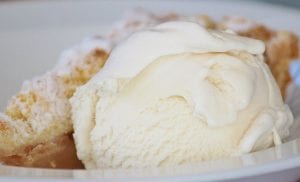 Frozen custard, like gelato, belongs in a list of food-cousins that often get mistaken for ice cream. Custard, as a dish, has a long history dating all the way back to Ancient Rome. Although custard has European origins, frozen custard was invented by accident in 1919 Coney Island, in the U.S. Vendors Elton and Archie Kohr adjusted an ice cream machine and added an essential ingredient–eggs.

What Is Frozen Custard Made Of?

Frozen custard is made of the same ingredients as ice cream: cream, milk, and sugar. The only difference is that egg is added as an ingredient, turning the ice cream into something that tastes similar to custard, hence the term ‘frozen custard’.

What Is The Difference Between Frozen Custard And Ice Cream: Custard vs Ice Cream

Adding eggs to frozen custard also gives it a different texture compared to ice cream. Thanks to the eggs, its texture is smoother and creamier. It’s also a lot denser, and stored and served at warmer temperatures.

Frozen Yogurt: Made with Fermented Milk 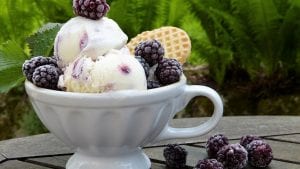 When your friend invites you for a “froyo,” how is it any different from ice cream or gelato? It may look the same as the two, but it’s actually far, far different.

What Is Frozen Yogurt Made Of

From its name, you should be able to figure out that frozen yogurt is an icy cold dessert made out of yogurt. It has a creamier texture compared to ice cream and gelato. It also has less fat than ice cream, at only around 2 to 4%. Because of its lower fat content, many people regard frozen yogurt as the healthier alternative to ice creams.

Aside from its ingredients, frozen yogurt tastes completely different from ice cream or gelato. Its taste teeters between sweet and sour, depending on whether it’s a fruit-flavored yogurt. The reason for this strange but unique flavor is the milk used in the process of making it.

The milk used basically goes under bacterial fermentation. This means that there are good bacteria that help enhance the flavor and texture of the dessert.

Unlike ice cream or gelato, frozen yogurt is usually served plain, topped with fruits and other sweet treats. However, other shops offer froyo that comes in different flavors, like blueberry or cheesecake. 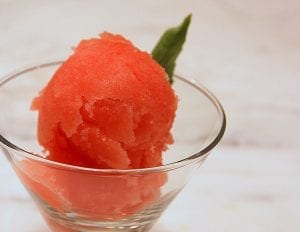 Another tasty icy dessert is sorbet, pronounced as “sorbei”. This icy treat is often confused with sherbet. The two terms are even used interchangeably. Though the two are different from one another, the variation is not so big.

What Is Sorbet Made Of?

Sorbet is a frozen dessert made with fruit puree or fruit juice, sugar or sweeteners, and flavorings.

Unlike the other icy treats mentioned, it doesn’t have any milk or cream. It’s just fruit that’s blended, churned, then frozen. Sugar and flavoring is added to give it extra flavor.

Because it doesn’t have dairy products, it’s lower in fat than frozen yogurt, gelato, and ice cream. In fact, most sorbets have no fat at all! However, it still has a lot of sugar. So its sugar content is one thing to watch out for when eating this delicious dessert.

What Makes Sorbet Different From Other Frozen Desserts? Sorbet vs Ice Cream and Others

Again, sorbet doesn’t have any dairy ingredients. So, one of the ways to tell it apart from other frozen desserts is through its texture. Instead of the rich, creamy texture of ice cream, sorbet has a lighter, slushy ice texture.

Also, sorbet’s core ingredient is fruit puree. So, like frozen yogurt, it doesn’t come in flavors like vanilla and chocolate. It’s ‘flavors’ could be the various fruits pureed for the sorbet.

Making homemade sorbet is easy. And we have just the right recipe that’s simple to follow and bursting with fruity watermelon flavor. Check out our Watermelon Sorbet Recipe and experience the wonders of sorbet for yourself. 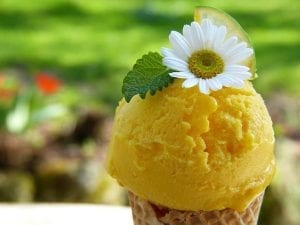 People often think of sherbet (pronounced as “sher-but”, not sherbert with an extra ‘r’) as being the same dessert as sorbet. But their thinking is actually not invalid. That’s because the difference between a sorbet and sherbet is actually very small.

What is Sherbet Made Of?

Basically, sherbet is made of the same ingredients as sorbet. It’s made with fruit puree or fruit juice, sugar, and flavorings. However, sherbet contains an extra ingredient that sorbet doesn’t, which sets the two apart.

Difference Between Sorbet and Sherbet: Sherbet vs Sorbet

Sherbet, on the other hand, has some cream, milk or even buttermilk, albeit in small amounts. Sometimes they even put egg whites or gelatin in its ingredients. The reason for this? To give the frozen dessert a richer, creamier texture. Without dairy products, your icy treat would be very light, like sorbet. Although, U.S. law states that sherbet is only allowed to have less than 2% fat. So both are still light, but sherbet is just a little bit creamier than sorbet.

The flavors are still fruit-based and similar to those of sorbet. In fact, you can make a sherbet with almost any kind of fruit! And if you love grapes, we suggest you try our quick and easy Grape Sherbet Recipe. 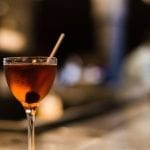 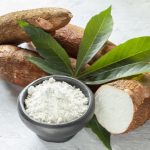 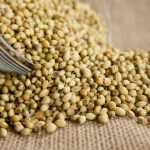 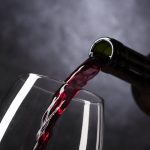 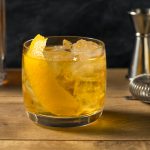 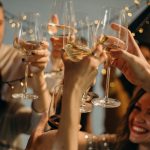 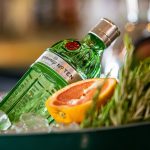 All You Need To Know About Tanqueray, The Iconic Dry Gin 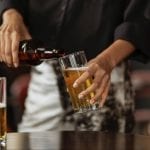 All You Need to Know About Wheat Beer 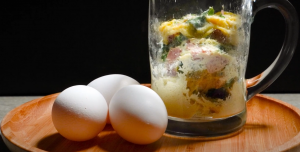 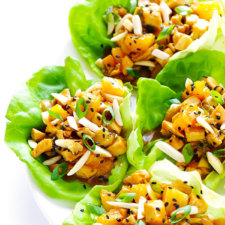