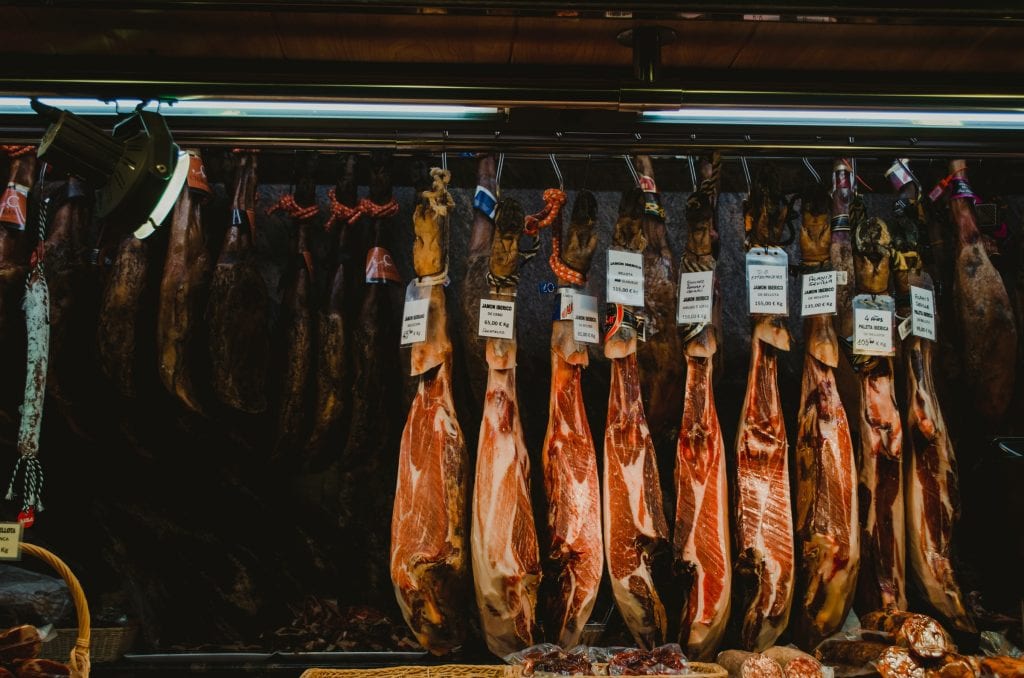 The minute you get a taste of Iberico pork, you’ll know that you are onto something special. This premium-grade top tier meat’s distinct flavor and tenderness is like no other, and it’s yet to be the most unforgettable culinary adventure you’ll likely have. The marble pattern that you see in this red meat indicates juiciness with the right flavor and grease, almost as if you are biting into butter.

Such incredible quality meat naturally comes at a high price. A leg of pure acorn-fed free range Iberico pig already costs about $4500. It is expensive and yet popular so much so that it creates a whole industry of Iberico pork production. Visit the Spanish countryside and you’ll see that they even put up a ham road, called Ruta del jamón ibérico, just for selling Iberian pork products.

But where does this Iberian pork meat come from, and what makes it special? Got your hands on the finest, most expensive ham in the world? We’re here to tell you all about the cuts and let you in on the best cooking method that will turn this meat into a unique culinary dish you wouldn’t forget.

What is Iberico Pork?

Raw Iberico pork, or jamon iberico, almost looks like beef. Instead of the usual white pork meat, it is a bright red color. The flavor falls on a more complex spectrum of taste sharing the qualities of beef and pork in some cuts. Their diet and the environment plays an important role. An acorn-fed pure breed will taste intensely sweet and floral. But the most apparent taste, as you would already expect, comes from acorns which will be nutty as well as earthy. The taste is almost the same as having a slice of a mildly salty parmesan cheese.

But the unique selling point here is not just the meat itself, but the fat. Forget the fats that we consciously trim away. The white flecks of fat that you’ll see in the lean cuts of this red meat is called marbling—a real sign of the meat’s quality. Because of this fat, this very fine Iberico ham becomes so soft that it melts right in your mouth.

Why is Iberico Pork So Expensive? 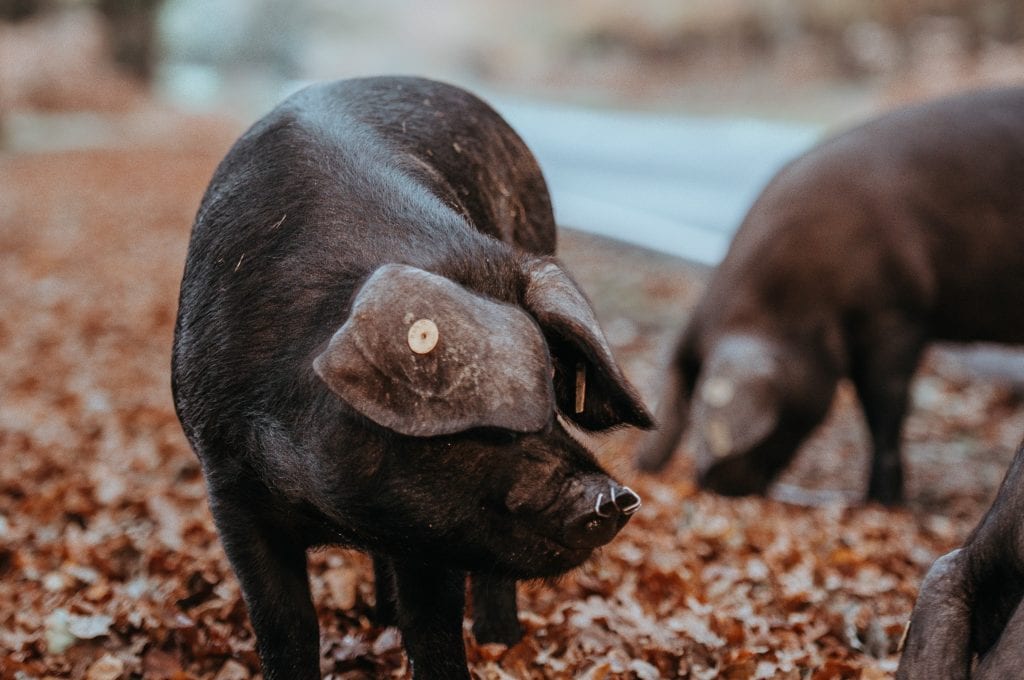 Photo by Annie Sprat on Unsplash

Black Iberian Pigs are semi-wild pigs with black hoofs that are raised in the native regions of Portugal and Spain, both of which comprises what is called the Iberian Peninsula. Ever thought about how French wine and cheese producers maintain a price dominance in both these food items? Aside from being the original producers, they also have the best environment to make these products. Think hectares of vineyards just for planting and fermenting grapes to make the finest bottles of wine. The same thing applies when buying Iberian ham where the most expensive breed can be found only in the Iberian peninsula. The region is a rather mountainous area that undergoes extreme weather conditions which in turn makes the animals raised there robust, but one that possesses a high nutritional value. 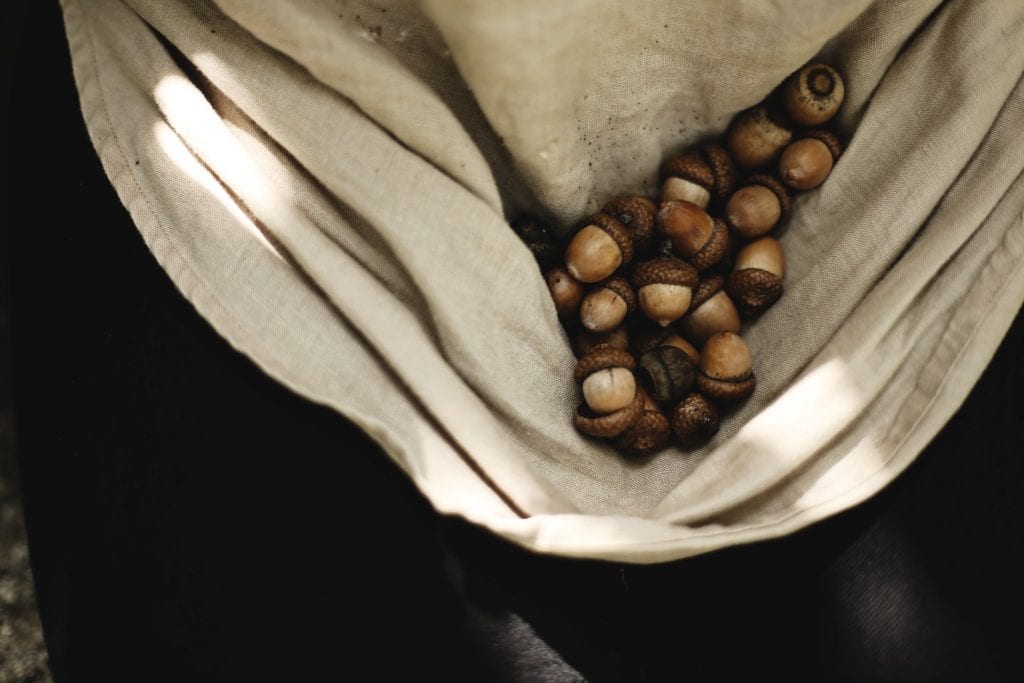 Photo by Ksenia Makagonova on Unsplash

But that’s not the only reason that makes Iberico ham special. The outrageously expensive Iberico pork price is due to these black pigs living in a diet of acorns. They thrive in the right ecosystem called “dehesa” where you’ll mainly see oak trees and wide grassland. And as if that’s not enough, because they run free in wild pastures, they can eat what the natural cuisine has to offer. Swineherds make sure that they are fed for at least two seasons which directly improve their taste giving their meat a distinct nutty flavor. Finally, compared to other types of pigs, Iberico pigs have a unique body that develops a higher fat content into the muscle for the most tender pork meat.

That said, the Black Iberian Pigs, as they live in the Iberian Peninsula, is actually an indigenous pig rather than a descendant of any wild boar. They are special, not only because they feed on a specific nut, but primarily because they thrive in this particular place and conditions. All these things combined make Iberico ham the most expensive ham in the world. 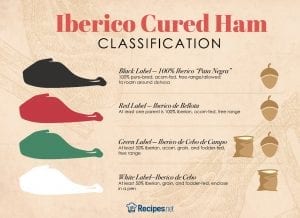 Not all Iberico pigs are created equal, though. Some are fed purely of acorn which makes it 100% Iberico. These are black label Iberian pigs and the only breed that you can call “pata negra” or black hoof. Pata Negra ham is the very best. Jamon Iberico De Bellota comes second. While this breed is also purely fed of acorns, they classify as red label as they are a cross-breed of black Iberian pigs with other more common pig breeds. The green label groups Iberico pigs that are fed with a combination of acorns and grain. While the lowest breed that is fed with only grain and aren’t free range are white label. You can buy specific parts of the Iberian pig fresh to enjoy in delectable dishes. While the Ibericus ham, specifically, is hung and dry cured for at least 24 months before they are ready to be consumed. 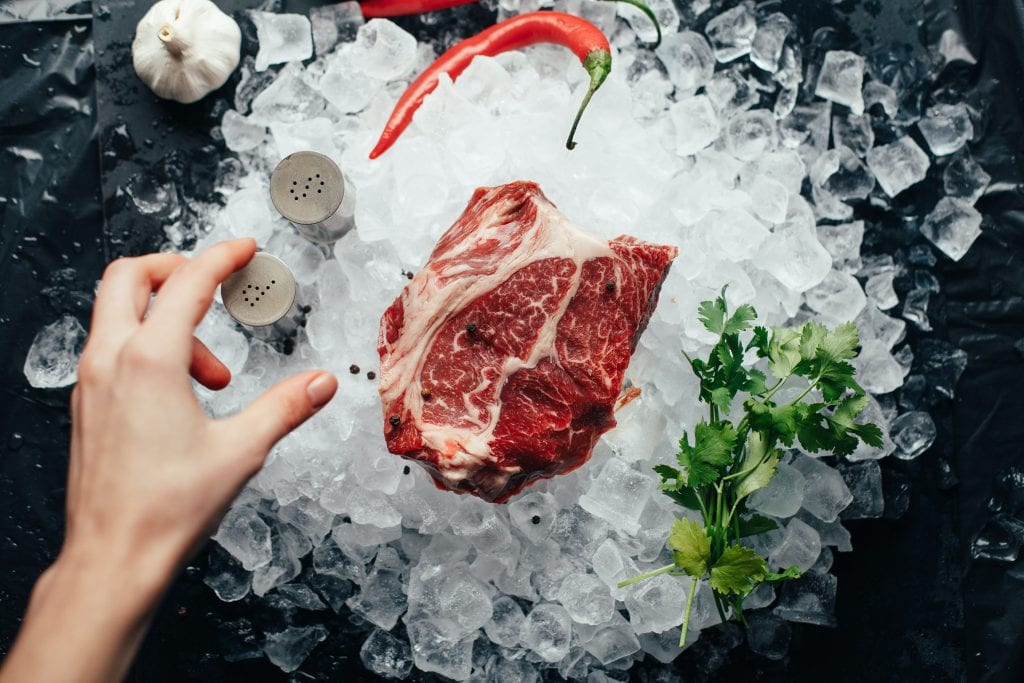 Photo by Victoria Shes on Unsplash

You will see that Spain has a more nuanced way and far better way of cutting pig than how it’s done in the US. The shoulder alone is the most flavorful part. It has three special cuts: Iberian pluma, Iberian presa, and Iberian secreto. 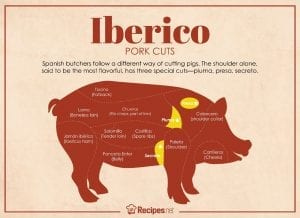 Iberico Pluma is found at the bottom end of the loin. It is the equivalent of pork flanks and is the thinnest, and most prized, of the three cuts. Iberian pluma has a very succulent and delicate flavor. It is the best choice for our grilled pork tenderloin recipe.

Think of Iberico Presa as having a similar texture to steak. It has a very meaty and tender texture. This specific cut would be a really great choice for roasting than any other cuts. If you love to snack on crisp beef lettuce wraps, the presa cut is your best bet.

The Iberico Secreto, or the shoulder muscle on the other hand, is the secret cut of pork as you would get from its name, is both springy and soft to the bite. You would do best when it’s cooked medium rare, seared in the skillet with herbs and aromatics for a minute or two. Our garlic butter sauce recipe combined with this specific cut will make for a great fancy dinner.

Another popular cut is the Iberico pork tenderloin or Solomillo. It’s a beautifully marbled Iberian cut that is very versatile in terms of recipes to cook it with. Stir fry it with some broccoli and lightly season with soy sauce just like this Thai Spicy Broccoli Beef.

Where to Buy Iberico Pork? 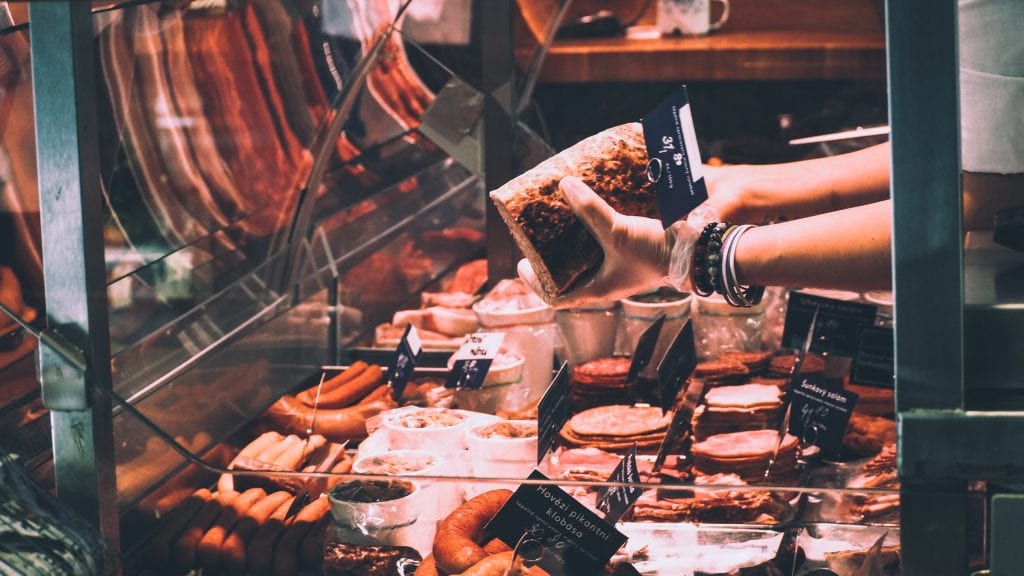 Photo by Jack Hunter on Unsplash

In general, the only place to find the freshest produce is your local market. Shopping at a farmer’s market means that you are getting fresh, healthy, and organic produce in season at an affordable price. Aside from that, you get to support your local farmers and you are consuming fairly raised livestock.

Looking for Iberian pork in the US local farmer’s market might be a lot more difficult. So far, White Oak Pastures in Bluffton, Georgia, and Encina Farms in Middletown, California, are the only places that get to sell homegrown Iberian hogs.

How To Cook Iberico Pork? 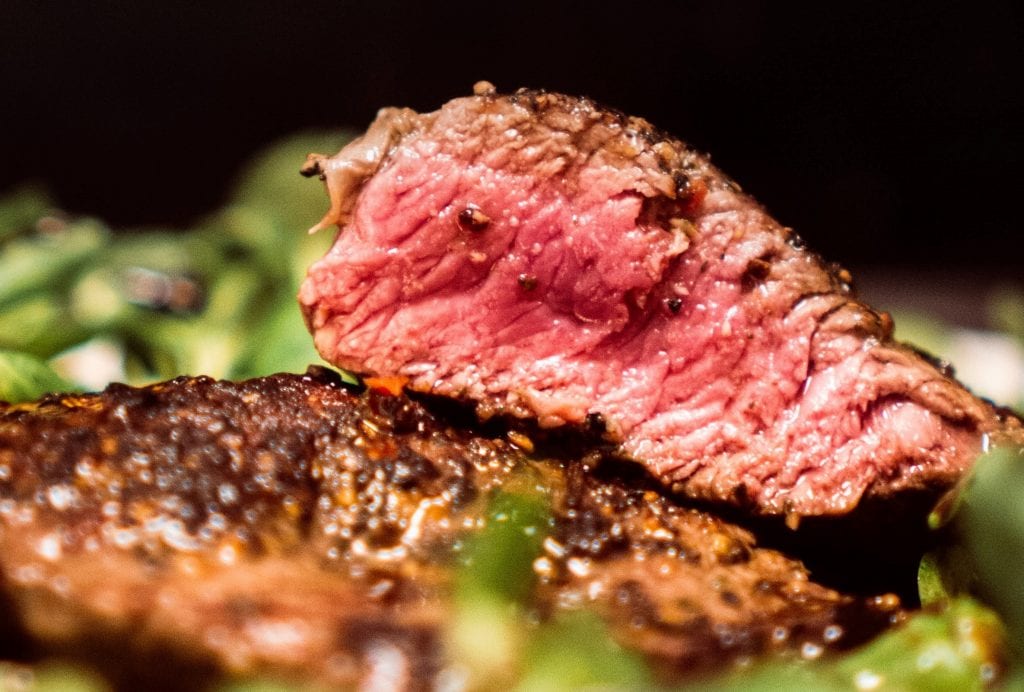 Such a distinct flavor from Iberico bacon is a meal to enjoy on its own. As they are salt and dry-cured, one can immediately consume a slice directly. If you’re into making antipasto platters enjoyed with wine, add some slices of Iberico ham to leave your guests in awe. Aside from a simple salt pepper seasoning, maybe with a squeeze of lemon, you won’t find a lot of easy Iberico pork recipes out there. Especially one that will give justice to the taste and quality the meat already has. Still, we’ve got some ideas:

Cooking with Iberico Pork is just like cooking with regular pork. However, keep in mind that an excellent quality ham is best consumed light. You want to avoid overloading on sauces and spices that can overpower it. Here are our suggestions:

If there is one thing that Westerners and Spaniards share, it is most obviously the love for pork. With the way they ethically raise Iberian pigs, and how they feed on natural resources, it’s no wonder many go at lengths just to get a taste of this special organic pork. Just by having a slice of this premium pork, you’ll already know why it remains to be a true Spanish pride.

Read Next: 31 Types of Pasta and Their Uses