Bear Meat: A Guide to a Risk-Free Feast

Bear Meat: A Guide to a Risk-Free Feast
Table Of Contents
'

Bear hunting season is coming soon! And it isn’t just about trophy hunting. It’s also about how you would enjoy a large feast of bear meat recipes afterward. A bowl of tasty heartwarming stew made with this exotic meat after a good tiring hunt would be more rewarding than the trophy, wouldn’t you agree?

Native tribes, settlers, and frontiers have been consuming wild game for a century now. The meat is deemed palatable and edible in North America, Finland, and Siberia. But how do we know if it is safe to eat? In this article, we’ll guide you on how to safely cook and eat the tons of bear meat recipes. So read on.

Can You Eat Bear Meat? 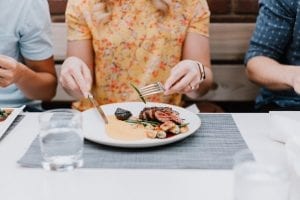 The answer to this question is, yes, we can eat bear meat. But first, we should prepare it properly. We know wild game meats contain a roundworm called trichinella which causes trichinosis, a parasitic infection that invades the intestines with symptoms such as diarrhea, fever, vomiting, and abdominal pain. This kind of infection is caused by eating raw or undercooked food. You can avoid catching bear meat parasites by following proper food safety procedures before eating it. Simply follow the 375 degree F rule for external cooking and 160 degree F internal temperature and you won’t risk having undercooked bear meat! 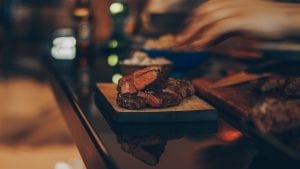 Asking around, you will find different opinions regarding the look and taste of bear meat. To put it simply, it’s a slice of flavorful red meat that is a sweeter and coarse-grained version of venison. In terms of the meat’s color, it is a brownish-red darker than beef but almost as dark if not less than venison. It has large chunks of lean stringy meat. At first glance, and especially when cooked properly, you wouldn’t be able to tell that it’s bear meat on your plate.

Generally, bear meat would have a gamey taste, with a distinctly metallic flavor inherent in any wild hunt. While usually compared to beef and venison, it has a stronger flavor than the two. Some say it is also a bit sweeter. With regards to fat, you would want to remove as much bear fat as possible right after the kill. This will save your meat from having that putrid as well as rancid smell. However, the taste will always vary depending on the bear’s breed and the environment it lived in. For comparison:

Black bears have a strict omnivorous diet. They are usually found eating wild berries, grass, meat, succulent plants, insects, and even larvae. The fact that they’re not fully carnivorous reflects on the taste of their meat. If you’re thinking about which bear is best, black bears are the usually preferred type of wild boar for a delicious dish. Picking the right hunting seasons also makes a difference. Black bear’s meat carries the flavor of the last thing it consumed.

Coastal Brown Bears live mostly on a diet of fish, especially during fall. This will become apparent in the taste of its flesh. It also has a strong fishy smell and lends a slight tang when eaten. Hunting it during spring, however, will actually give you tastier bear meat. This is because spring is when they just got out of hibernation and they will usually eat plants and fresh beach grass buds at the coastline.

Some say grizzly bears taste similar to black bears. However, grizzlies eat more carrions or dead animal flesh, meat, and fish than a regular black bear. This would be so much apparent in their taste, making them less-preferred. Also, most grizzly bears live in confined, guarded places so they are most rarely hunted for meat. 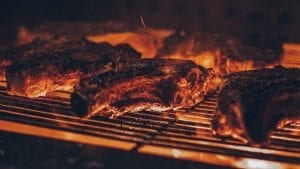 Think of bear meat as a great substitute to any beef or pork recipes. Though you might want to skip your sous vide medium-rare steaks using bear meat as they might put your health at risk. As a rule of thumb in eating this exotic meat, you should cook it at 375 degrees F spending at least 20 to 25 minutes per pound. You might need a meat thermometer to make sure the internal temperature should go up to 160 degrees F, which is the ideal heat to kill the trichinella larvae that are infesting the meat.

Tip: Aim to reach an internal temperature of 160 degrees F, especially in the thickest part of your meat.

For extra safety, keep in mind that you should not keep your raw wild game meat close to other food stock or ingredients. Especially if you’re going to store them in the fridge. Aside from that, we must make sure to always clean the utensils that we used to prepare bear meat. Sterilizing the tools you have used will be enough to get rid of the trichinella worms that might have clung to your utensils. 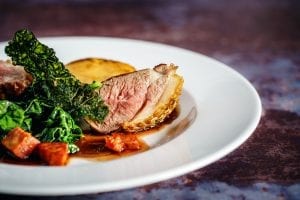 The recipes you can make are just as many as the tons of meat you can get from your hunt. Replacing some of your pork and beef recipes with bear meat will give you a stronger meaty flavor.

Bear meat is a tasty cut of red meat and is quite similar to venison in taste and color. This flavorful meat is safe to eat by following food safety measures. Its coarse-grained stringy meat is more like beef texture-wise. As the production of prepared bear meat continuously increases, many people are getting intrigued about consuming this wild game meat.

Questions such as whether it is edible or safe to eat will always get you a varying answer. You might come across some hunters who would tell you, it is inedible. But we bet you are more likely to come across one who got to taste this wild bear than it is the best chunk of meat out there. With the right preparation and cooking, it is possible to enjoy several delicious bear meat recipes without putting you at risk.

Read Next: Frisee: What It Is and Ways to Serve It