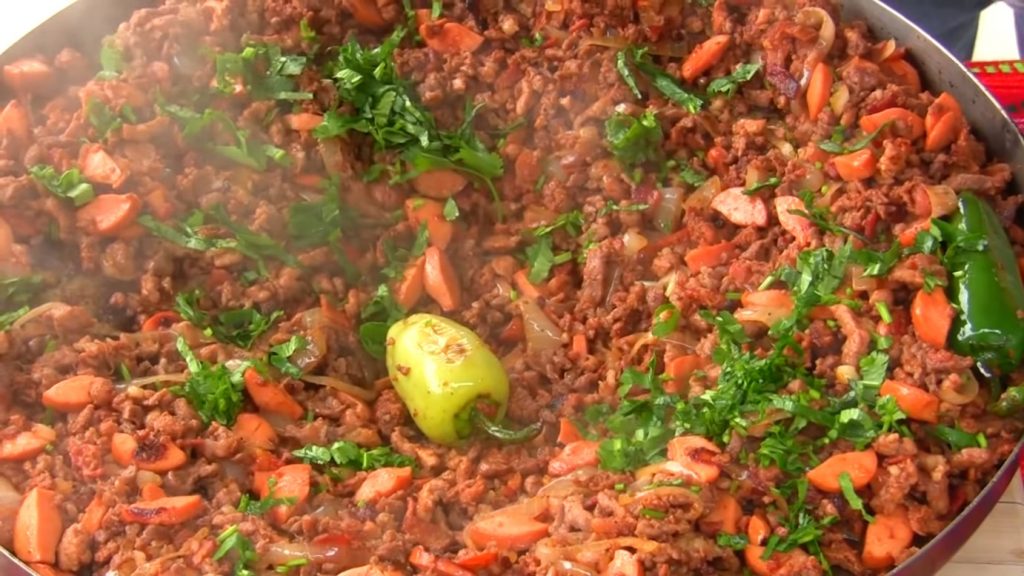 Looking for a meaty snack? Look no further because this Discada recipe, fully-packed with different kinds of meat and mixed in with lots of chiles, will surely satisfy you!

If you’re wondering where the term “discada” originates, it’s actually from the disc-shaped pan. This is used in cooking the dish wherein each ingredient is spread out on the disc one at a time, over the heat of a flamed stove. But if you don’t have that special pan, a large skillet will work just as fine for this Mexican discada.

To make this discada recipe, first throw in some bacon and chorizos into a pan (their fats act as a non-stick agent). This will also add a delicious flavor to the potatoes. Then you can toss the potatoes right in, with oil and salt. Once those potatoes are nicely crisp and sauteed, set them aside with the bacon mixture.

Afterwards, add in the pork, steak, hot dogs, and a bit more oil. I personally love using hanger steak because they have loads of flavor and are extremely tender. If you can’t find it in the local butcher, just substitute it with sirloin, ribeye, or ground beef. It takes about 5 to 6 minutes for these meats to cook, but keep an eye on them by stirring occasionally! Then set them aside to make room for your chopped veggies next.

After all your meats have cooked, add in your chopped onions, peppers, tomatoes, garlic, and Discada seasoning of salt, pepper, and cumin. This is so your veggies can maintain some of their crisp. It won’t get soggy once you toss your Discada meats back into the pan. Now for extra flavor, add in the beer and cilantro together with the meat mixture. Make sure to let your beer reduce in that delicious meat-veggie mixture until the liquid has evaporated.

AND YOU’RE DONE! Make Discada tacos by serving them in warm tortillas with various toppings of your choice. Personally, I love the crunch of pico de gallo, creaminess of avocado, and refreshing flavors of cilantro and lime.

This Discada Recipe, a Mexican dish that mixes different kinds of grilled meat, is one of a kind! There’s at least 5 types of meat here, which is perfect for meat-lovers all around. Both cumin and jalapenos also elevate the dish with flavor and heat. You may also add vegetables like bell pepper, tomatoes, and potatoes to improve the texture and to make your dish even more filling. Your plate will be oozing with all the flavors infused in this Disacada mexicana!

How To Make Discada

Enjoy a savory dish with a kick in this Mexican discada recipe. It’s packed with hearty chorizo, pork, and chiles 一 all served on warm tortillas.