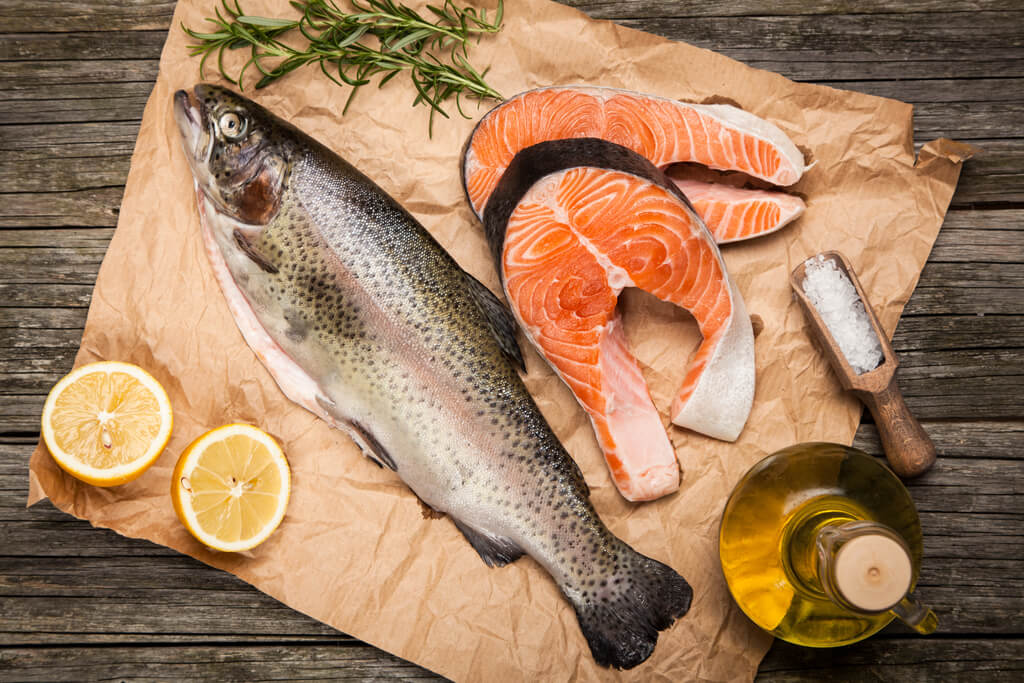 Just like swai fish, steelhead trout and salmon are two species of fish that most people confuse with each other since they look similar. However, the two are entirely different types of fish!

To help you better understand them, in this article we will discuss the longstanding debacle between steelhead trout vs salmon. What differences make them unique, what characteristics do they share, and more!

What Is the Difference Between Steelhead Trout vs Salmon?

When discussing steelhead trout vs salmon, we have to consider their difference in appearance, taste, habitat, and even their price in the market.

Steelhead Trout and Salmon Are Different Types of Fish

First things first, steelhead trout is a type of trout fish, different from salmon fish. However, they both come from the same family called the Salmonidae or Salmonids.

Steelhead trout (also called steelhead salmon) is simply the anadromous form of the rainbow trout. “Anadromous” simply means that the fish is first born in freshwater, goes to the ocean to grow into an adult, then migrates back to freshwater to give birth.

The steelhead trout is first born as a rainbow trout. However, this fish transforms into a steelhead when they migrate to the ocean to grow as adults. Once it is ready to give birth, it returns to the freshwater environment where it can spawn up to three times. After giving birth, they can live for up to 4 to 11 years (4 to 6 years on average). However, if they don’t migrate to the ocean and stay in the freshwater, then they remain as rainbow trout.

While steelhead begins life as a rainbow trout, the salmon fish will always remain as salmon. This means they do not transform into another type of fish when they migrate. But just like steelheads, salmon are also anadromous. However, they die after completing the birthing process and live a short period of 2 to 7 years (4 to 5 years on average). 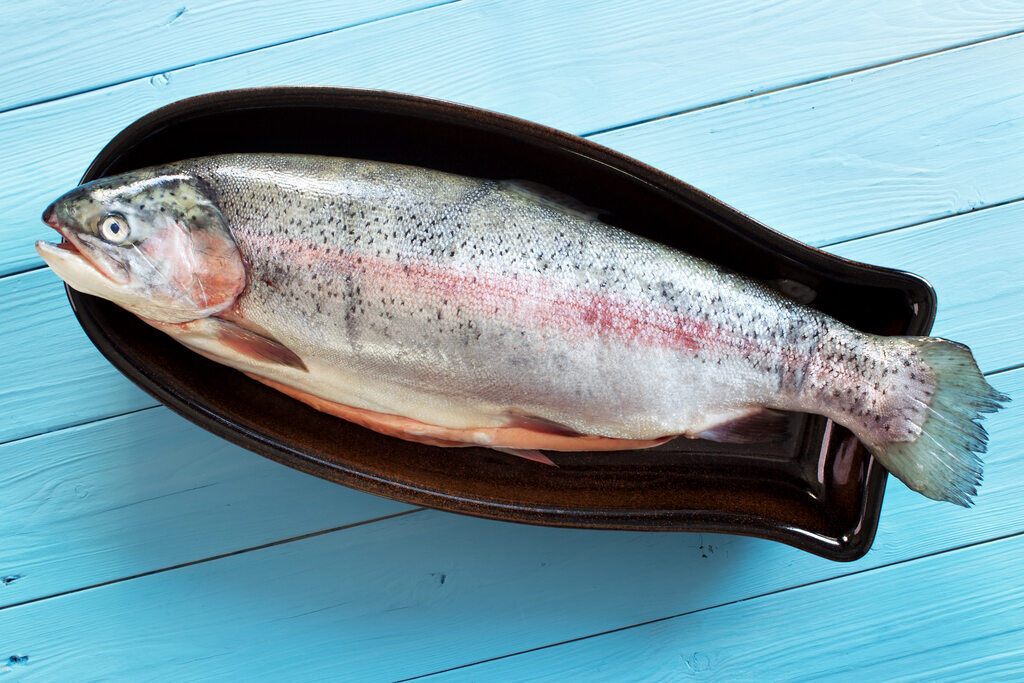 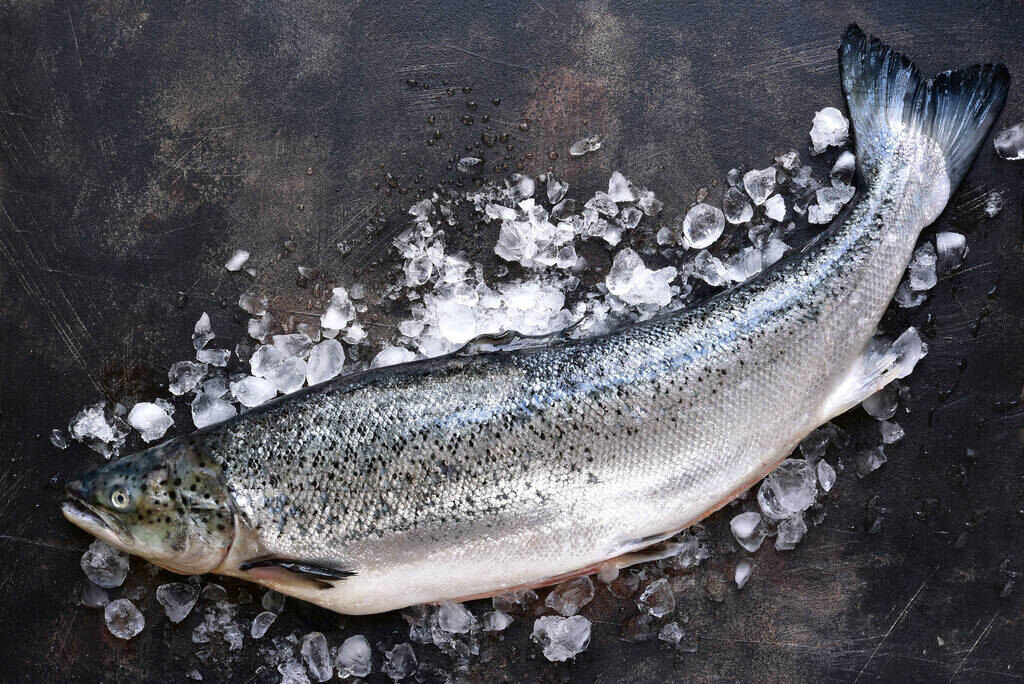 Steelhead Trout and Salmon Migrate From Freshwater to Saltwater

Steelhead and salmon are both considered anadromous, which means they migrate from one body of water to another. Specifically, both migrate from freshwaters such as lakes, streams, and open bays to saltwater or ocean, and then back to freshwater again.

Both Have Orange-Pink Flesh

Both salmon and steelhead trout’s bright orange-pink flesh look alike, even when cooked. This is probably why they’re always being confused with one another. Raw steelhead trout has a delicate and tender texture with a pinkish-orange hue that strongly resembles salmon. When cooked, the meat becomes flaky and tender. On the other hand, salmon flesh can range from pink and orange to red with a texture similar to that of steelhead.

Raw flesh of a steelhead trout 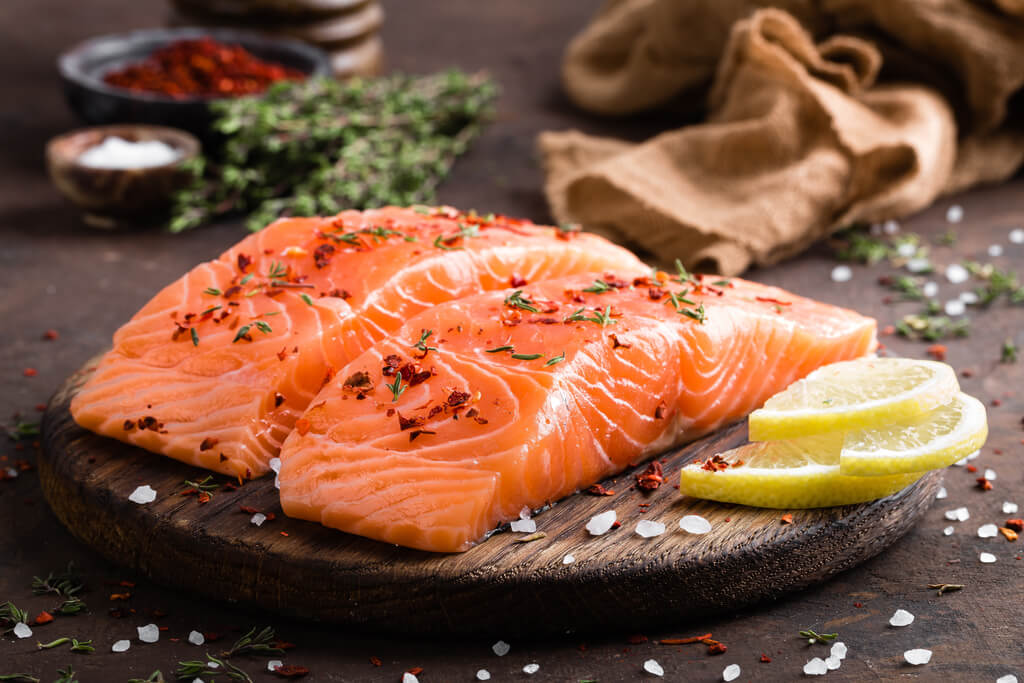 Raw flesh of a salmon fish

Because of their strong similarities in appearance, steelhead trout is often considered a good substitute for salmon. So basically, you can use and prepare steelhead trout like how you would salmon in most recipes. Now, salmon and steelhead are popular in main dishes, and these seafood are versatile.

They’re best for grilling, roasting, or baking recipes. Try baking your salmon or steelhead trout and basting them in milk and flavorful herbs. Or you can poach, saute, and even pan-fry them to include as a topping to your fish tacos.  Outside the confines of baked and grilled recipes, there are actually a lot you can do with these mildly-flavored seafood.

Salmon has a rich, buttery flavor with a slightly oily taste, while steelhead trout tastes like a combination between trout and salmon, albeit having a more delicate flavor than the latter. Both have a mild, neutral taste that’s not overly fishy. Again, both fish fair well when baked, grilled, roasted, and even poached. Both also complement a rich buttery sauce with herby and citrusy flavor notes.

Steelhead Trout Is Smaller Than Salmon

Salmon and steelhead trout look very similar to each other. However, generally, salmon is larger than steelhead depending on the species. The largest species, chinook (also called king salmon), can grow up to 58 inches (4.8 feet) and weighs 126 pounds. Meanwhile, the smallest such as the pink salmon can grow up to 30 inches and weighs 12 pounds. But on average, most reach only 3 to 5 pounds. Like steelhead, salmon has a silvery and brassy body with black spots on its head, body, and fins.

On the other hand, steelheads are 24 to 45 inches long and only reach a maximum weight of 50 to 55 pounds. True to their name, steelheads are generally more streamlined in shape. It is silver and brass in color with a pink stripe and brown spots across its body. Its freshwater form, the rainbow trout, has blue, green, or yellow colors with a silver shading on its underside and a pink-red stripe that runs from its gills to its tail.

Fatty seafood like salmon and steelhead trout contains numerous health benefits. In fact, they’re one of the best sources of omega-3 fatty acids. Basically, what omega-3 does is help you maintain a strong immune system, improve cholesterol levels, and help reduce the risk of heart and lung-related diseases. Additionally, many people who try to eat healthily also include salmon in their diets because they are an excellent source of protein, as well as vitamin B12 which helps you fight anemia.

Now, you can safely say that steelhead is a good fish to eat. Steelhead trout is touted as one of the healthier seafood, even more so than salmon, because it contains not just omega-3 but also omega-6 fatty acids and vitamins such as vitamin D and B12. Trout is also an excellent source of calcium, iron, and lean protein. Some prefer trout because it only contains 120 calories and 5 grams of fat per 100 grams of serving. Meanwhile, salmon has 175 calories and 11 grams of fat in every 100 grams of serving.

Though there’s not much of a glaring difference between the two, steelhead provides slightly better nutritional value.

Is Steelhead Trout High in Mercury?

Steelhead trout contains low to moderate mercury levels while salmon are on the list of lowest in mercury. According to the Food and Drug Administration (FDA), salmon and steelhead trout are two of the best choices of fish if you want to avoid mercury. Still, you should limit trout servings to two times a week. You can eat salmon every day, but have it in smaller servings or a total of 8 ounces per week.

Which Is More Expensive, Steelhead Trout vs Salmon?

Salmon is more expensive than steelhead trout because it can only spawn once, making the stock of salmon more limited than other seafood. Steelhead trout also breed more fish eggs in addition to spawning not just twice, but thrice. Additionally, some species like the king salmon are also difficult to catch. In other words, it is the supply chain that drives the prices of salmon up.

Now that you know their differences and similarities, you might be wondering if steelhead is better than salmon.

Remember, steelhead trout has a milder flavor than salmon. However, steelhead lacks the buttery and fatty mouthfeel that salmon provides. This buttery mouthfeel is the flavor responsible for a more delicate and tender texture in fish. Packed with healthy fats, that buttery flavor makes salmon a versatile ingredient suited for almost any type of dish or recipe, be it in a taco, in a poke bowl, or a sophisticated entree on its own. Thus, this fish is the better choice in terms of taste.

On the other hand, steelhead trout provides slightly better health benefits. It has more omega-3 and 6. It also has less fat and calories per serving than salmon.

That said, both are excellent choices of fish. Both provide a flaky and tender texture that you can enjoy as a main dish or even as a topping for some dishes. If you’re looking for a healthier fish, the obvious choice is steelhead. If you’re asking what tastes better, steelhead trout or salmon, then obviously salmon provides a more flavorful entree. But, we suggest trying both or substituting one with the other every now and then. After all, steelhead is cheaper than the latter.

Read Next: Malt vs Shake: What’s the Difference?

Linguine vs Fettuccine: Their Differences Explained