What is Yuca and How to Cook it? 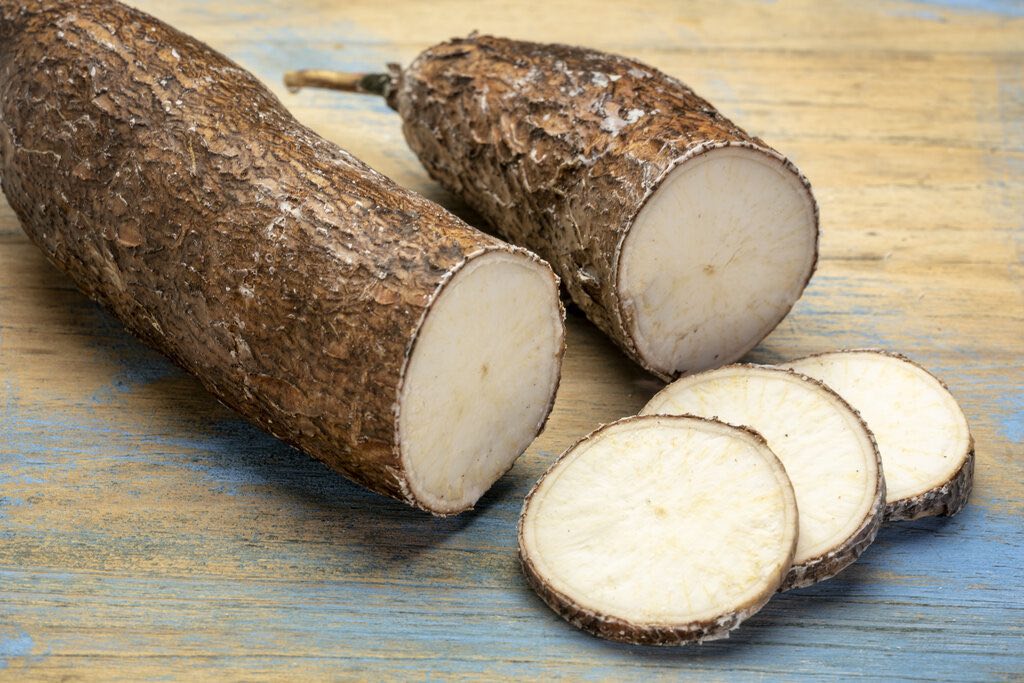 Yuca (pronounced as yoo-ka) also known as cassava or manioc, is the root of the cassava plant. Yuca, yuca root, and cassava root all refer to the same thing. It generally grows up to 6 to 12 inches and has white or slightly yellowish flesh with rough, bark-like skin. Many know it as a root vegetable. But, yuca is also an indispensable ingredient to make boba or tapioca pearls, the sweet chewy essential in your bubble tea recipe!

Yuca draws its roots from southeast of the Amazon basin and is also native to Brazil, South America, and parts of Asia and Africa. As it becomes increasingly popular, many Latin American dishes have yuca in them. Because it is high in carbohydrates and has drought-resistant qualities, it is also a major staple food in the less developed world. Currently, it provides the basic nutrition required for more than 800 million people around the world.

Usually, we distinguish types of vegetables by their appearance. But with yuca, it is determined by the amount of naturally occurring cyanide it contains. Research shows that there are eight varieties of yuca, but they are mainly distinguished by whether they are sweet or bitter. Sweet varieties are known for their mildly sweet taste that comes from having lower levels of cyanide. Authorities state that sweet yuca may contain less than 50 mg per kilogram on a fresh weight basis.

Bitter yuca looks similar to its sweet counterpart. However, it has a slightly more bitter taste because of higher levels of cyanide – up to 400 mg per kilogram – within the range of toxic levels. That said, you should never eat it raw. You have to make sure to prepare it properly before it is safe for consumption.

Generally, sweet yuca has an earthy and nutty flavor with a hint of sweetness whereas the bitter variety has a slightly stronger bitter taste. It also has a grainy texture, similar to that of potatoes.

Yuca vs Yucca vs Tapioca

Yuca is also one confusing vegetable. Because of its almost matching spelling, we may mistake yuca with yucca (pronounced yuhk-a) – a southeastern United States desert plant. Its comparable size and shape to a sweet potato also tend to confuse people between these two. Some even mistake it with its cousins, yam, and potato.

How to Prepare Yuca 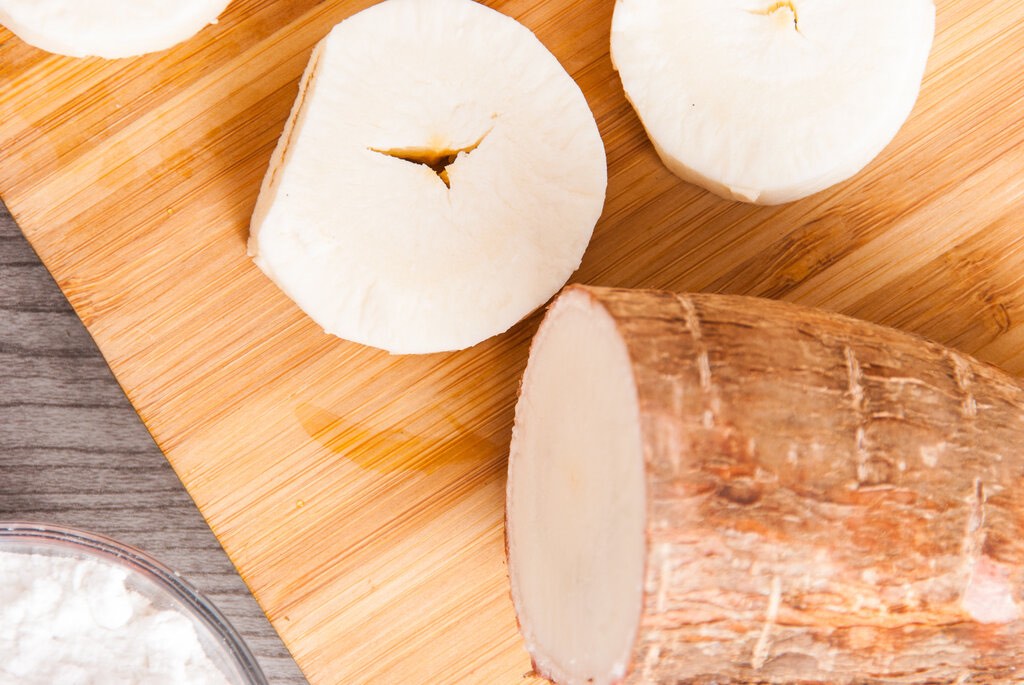 The most important thing about cooking yuca is the preparation due to the cyanide found in its plant, skin, and root. Sweet ones are slightly easier to prepare – removing the skin and core, and thorough boiling is enough. However, the bitter variety requires more attention as its initial levels of cyanide are high. Here are the steps to help you safely remove cyanide in a bitter yuca:

Rinse and remove the skin

First, rinse the yuca thoroughly before drying it off. Then, cut it horizontally into segments that are about three to four inches long. Stand the segment up on its end and slice vertically along its circumference until the skin has been completely removed. Repeat for the rest of the pieces. We recommend using a knife but feel free to use a normal potato peeler.

Studies have shown that most cyanides are found in the yuca peels and some in the pulp. Hence, removing the skin will help to reduce at least 50% of cyanide levels.

Now that you have peeled it, removing cyanide from the pulp is the next crucial step. Before boiling, make sure to soak your yuca for three to four hours. This helps to turn cyanide compounds soluble so that leaching and fermentation can happen to easily draw out the cyanide.

Once soaked, you can begin boiling them. When you boil yuca, it destroys the enzymes of the remaining cyanide in the pulp and is released as volatile hydrogen cyanide gas. Boil them for about 2 to 3 hours and it is ready to be used in your dishes!

How to Cook Yuca and Recipes to Try 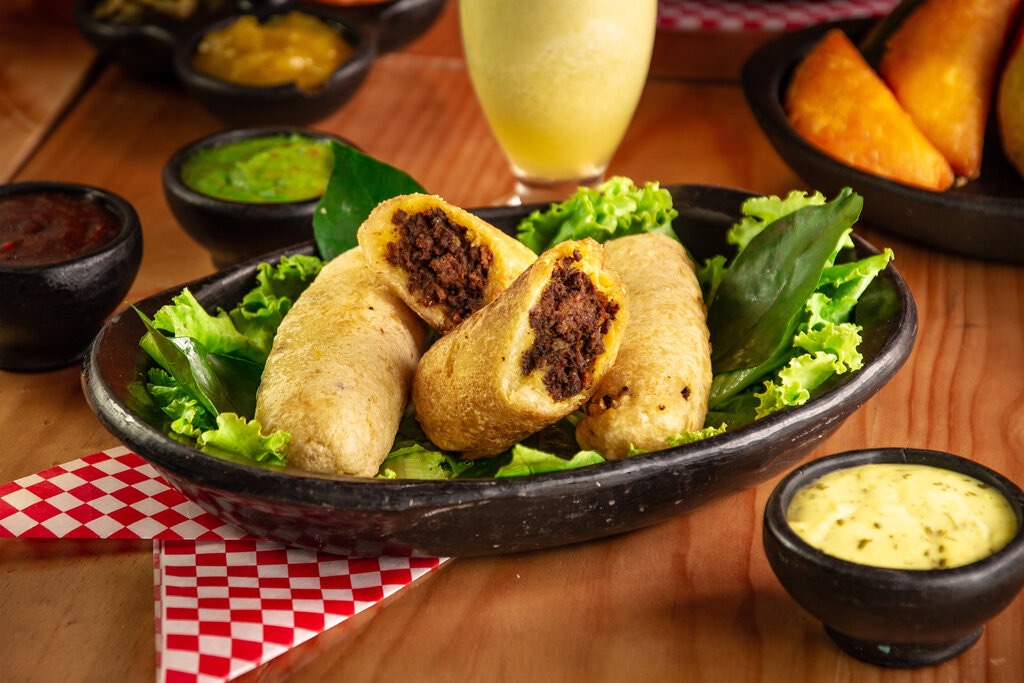 Yuca is one of the most versatile vegetables with diverse ways of cooking it. Treat it as you would a potato but more. After removing the cyanide, you can steam, oven bake, fry, or mash yuca. Make it into a stew, a seasoned paste, or bread, there are limitless ways to incorporate it into your dishes. There are so many yuca recipes out there but here are some of our recommendations that yu-can try!

Yuca Fries – One of the best substitutes for the usual potato fries, yuca fries are creamier and have more texture in every bite. Just as how you would make fries at home, they are pretty much made in the same way – boiled with salt and then fried in a frying pan.

Pasteles de Yuca – Ideal for any house party, this Puerto Rican dish is served with achiote oil. It is a seasoned yuca root mixture filled with savory pork and wrapped in banana leaf. Albeit slightly more tedious, this delectable dish is worth a shot at making.

Pan de Yuca – If a heavy meal is not what you are looking for, how about a light snack? This Ecuadorian yuca cheese bread is made from yuca flour, eggs, butter, and cheese served with a side of yogurt dip. For a crispier texture, grill your bread on a pizza stone.

Yuca Con Mojo – This classic Cuban dish is boiled yuca doused in hot garlic mojo (also known as magic) sauce. With four simple steps and a handful of ingredients, this is perfect for a quick but satisfying meal.

Nuegados de Yuca  – To curb your sweet cravings, this dessert is just right for you. It is traditional fried donuts from El Salvador served with panela honey, a sauce made from sugarcane juice.

READ ALSO: 21 Sweet Mexican Desserts You Have To Try 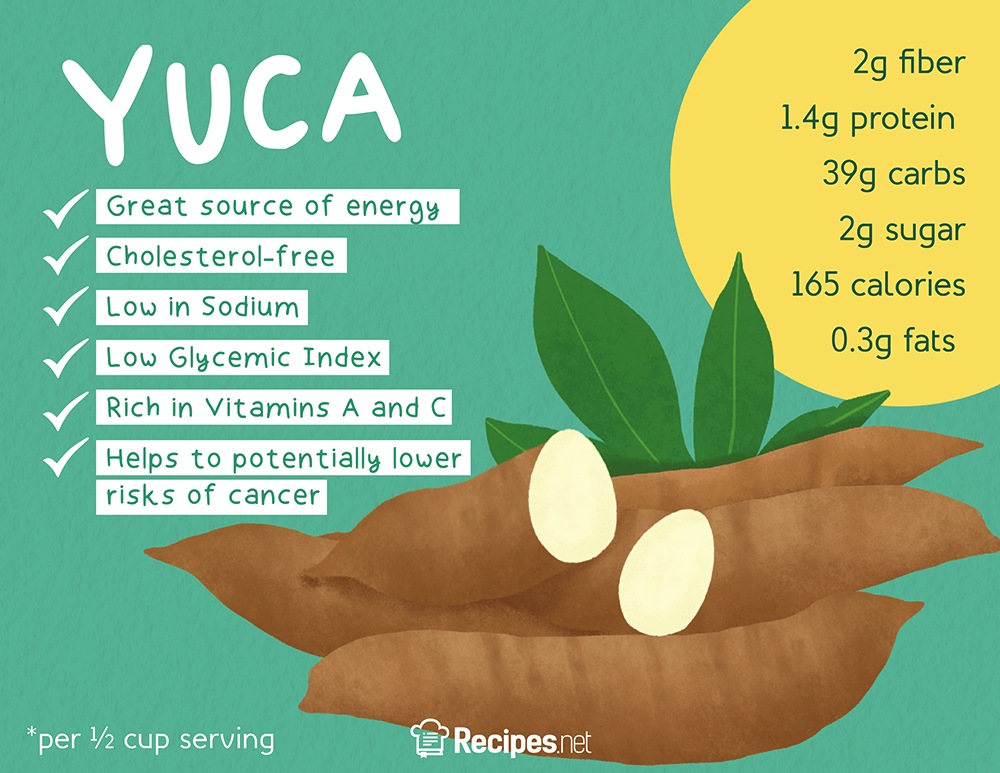 Yuca is high in carbohydrates, low in fat and sodium, and an excellent source of nutrients. It contains high amounts of Vitamins A and C, choline, and antioxidants to regulate metabolism and potentially lower the risk of cancer. It is also diabetic-friendly since its low glycemic index effectively controls blood sugar levels. Half a cup of yuca contains 165 calories, which is higher than sweet potatoes and potatoes, making it a great energy source.

Yuca is not rare and can generally be found in grocery stores such as Walmart or co-op, and Latin American food markets. You can find them in the produce aisle, close to where the potatoes and sweet potatoes are. You can also find frozen peeled ones in the refrigerated section. Although many countries cultivate yuca, here in the US, most are imported from Costa Rica.

When you are at the grocery store, do not be in a hurry to pick whatever yuca you see lest you get rotten ones! Here are some tips to pick fresh yuca:

Unpeeled yuca tend to last a week if stored properly. Once you have bought the unpeeled yuca, store them in a cool, dry place away from the sun and any moisture. Pantries or closed cabinets are good storage spaces. For peeled yuca, refrigerating it can help to keep them fresh for two to three weeks. Frozen ones can last up to about three months.

READ NEXT: 19 Japanese Desserts to Make at Home

Cherin is an avid writer and content editor. She has been writing and publishing several articles ever since she was in college. Prior to writing for Recipes.net, she worked in a publishing firm. Occasionally, she likes to explore new cuisines around her hood. 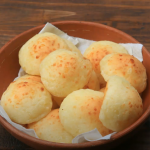 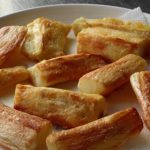 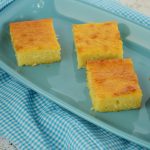 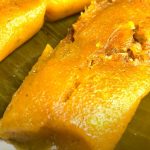 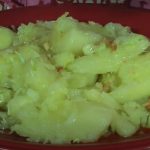 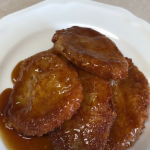