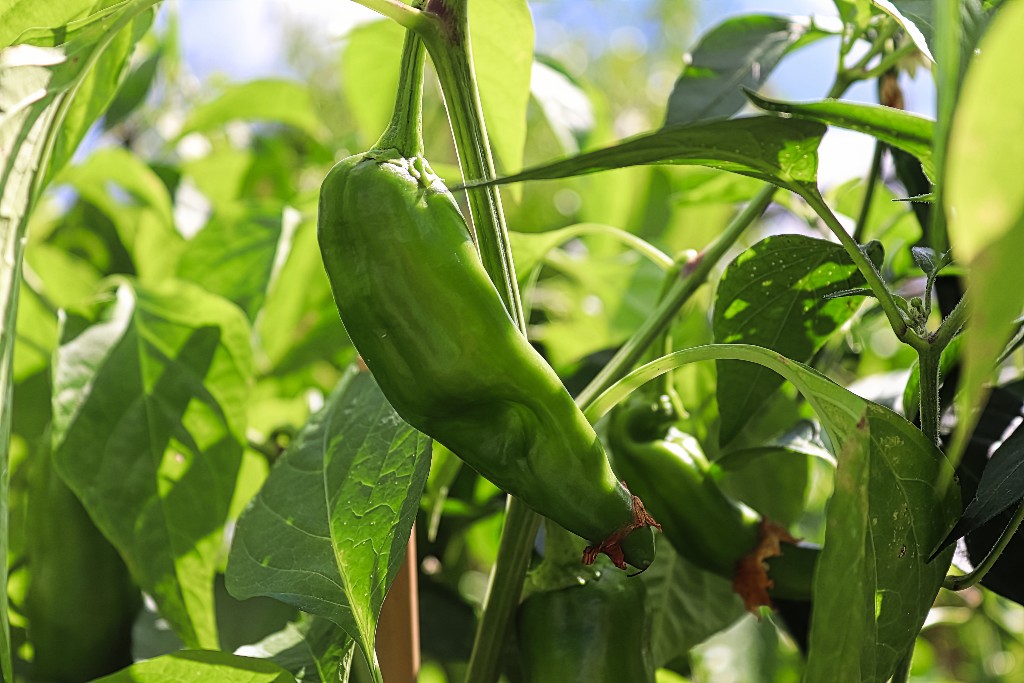 Anaheim Pepper: All You Need to Know and Recipes to Try
Table Of Contents
'

When we think of the best chili peppers in the world, popular varieties along the lines of habanero peppers might come to mind. But, there’s one gem that you might not know of just yet: the homegrown Anaheim pepper. First popularized in the state of California, this mildly-hot variety is a common ingredient in both American and Mexican food. Now, you can try your hand at it, too! So read on to learn more about this specific American chile.

What Is an Anaheim Pepper?

The Anaheim pepper or chile is a green-colored variety that’s mostly available in the United States. It has an average length of six to ten inches, which means it’s medium-sized when compared to other kinds of pepper. We love it simply because it brings a unique flavor and level of heat to certain dishes! Besides this, it’s also packed with good nutrients like vitamin C, A, and potassium to help keep your body healthy.

As its name suggests, this variety does have something to do with the city of Anaheim in Southern California. The fruit was popularized in the said area by Emilio Ortego, the first one to bring seeds of Anaheim chiles to the country. However, it was in Mexico where the pepper plants first popped up. That is the reason why you’d also find different versions of this ingredient in a handful of classic Mexican dishes. 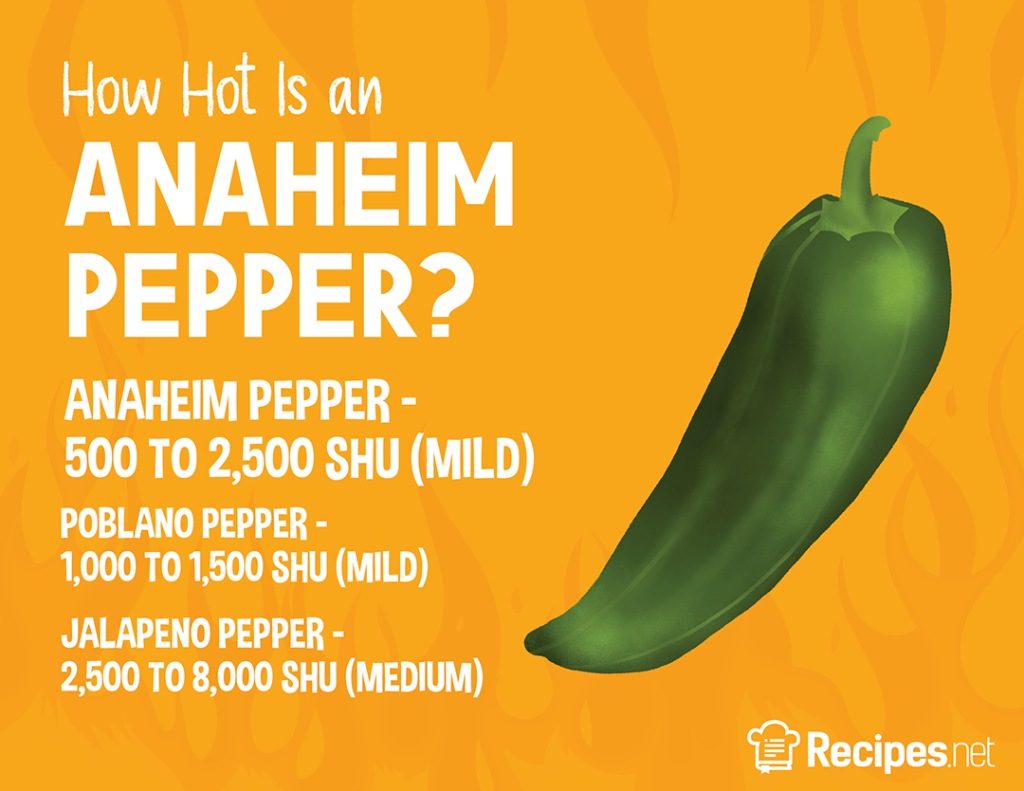 To put it simply, Anaheim peppers are only mildly spicy. If you’re wondering how hot an Anaheim pepper is in terms of the Scoville scale, you should know that it’s on the lower end of the spectrum. With the heat that measures around 500 to 2500 Scoville Heat Units (SHU), it’s a good family-friendly option for different dishes. At its hottest, it’s only equivalent to the milder varieties of the jalapeno pepper which stand at around 2500 SHU.

When the chile Anaheim is used raw, brightness backs its subtle heat. But, you’re also welcome to roast it beforehand to achieve a sweet and smoky flavor.

The Anaheim pepper is widely known as a kind of green chili variety. This is the most ubiquitous kind in the United States, after all. However, you can also encounter other types of this Californian pepper in the market.

When in Mexico, the Anaheim pepper is known as the “New Mexico chili pepper.” And if it’s specifically harvested from the region of Hatch, it is then called “Hatch chile”. Although these are technically just different names that refer to the same ingredient, many believe that these Mexican varieties are actually spicier than the ones from California due to special environmental factors.

READ ALSO: Serrano Pepper: How Hot Is It and How to Use It in Cooking

How to Use an Anaheim Pepper for Cooking

Anaheim chiles are great for dishes that only need a subtle spiciness. The fresh kind is an excellent hot pepper choice for roasting, stuffing, and canning, because of its thick skin. To cook, remove the peel and pepper seeds beforehand. Canned Anaheim peppers, on the other hand, are ideal for making salsa and a host of other sauces. You can also use this Californian variety as a milder alternative to hotter pepper varieties in certain recipes. 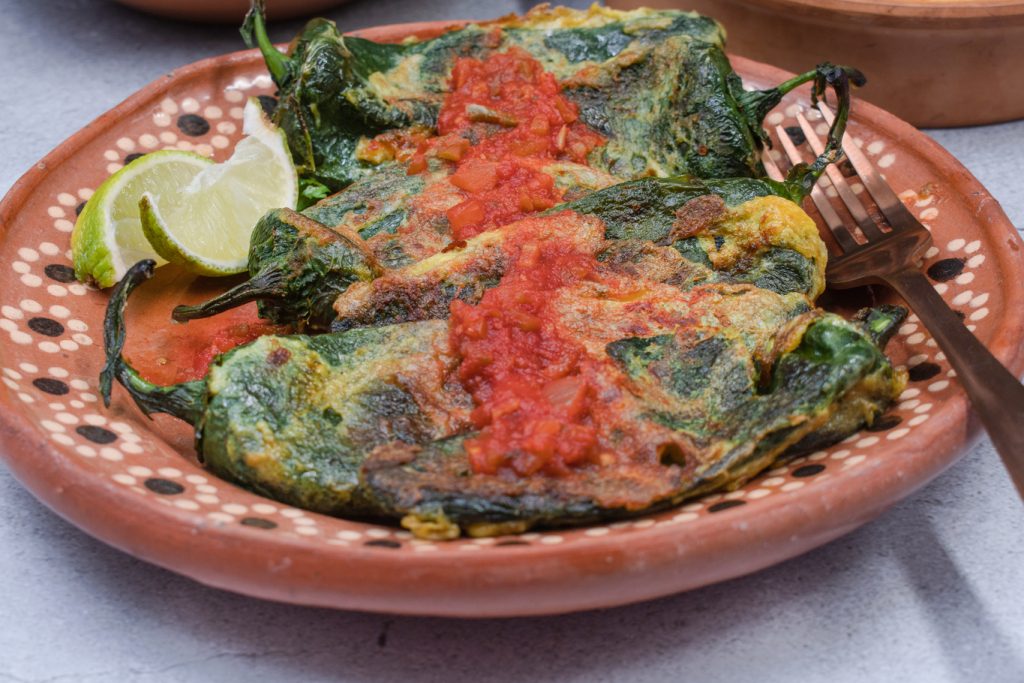 Now that you know the most common ways of preparing the Anaheim chili pepper, it’s time for cooking! Here, you’ll find the best dishes that you can make with this ingredient. Take your pick from any of the recipes below.

How to Store Anaheim Peppers

Bought too many Anaheim chili peppers? Worry not because they can stay good for up to two weeks when refrigerated. Beyond that, you can try a few preservation methods. First up is canning the fresh chiles with salt in hot water. Canned Anaheim peppers are excellent toppings for your favorite Mexican meals. Freezing is another one, although we recommend roasting the peppers first before proceeding. Then there’s the drying method that produces flavorful chile seco. Finally, you can turn the chili peppers into hot sauce.

With all that’s been said, it is clear that the Anaheim pepper is one of a kind. The only catch is that it can be hard to find sometimes. Despite being available all year round, only select supermarkets and grocery stores sell this specific pepper variety. So if you really want to try out certain recipes that call for it, give these Anaheim pepper alternatives a shot:

Celery Seed: What Is It And Best Substitutes