The dinner table is about to get interesting with our delicious Calamari With Vegetables Recipe! There are many ways to cook squid, but in this recipe we show you a healthy way to mix seafood with vegetables. This exquisite main dish is fit for royalty! It’s perfect for special occasions with friends and family. And although most aren’t familiar with cooking this tentacled creature, in this recipe we’ll show you just how easy it is to prepare savory and healthy calamari with vegetables.

The term calamari can mean many different things. While it’s true that it’s the Italian word for squid, it also used to refer to squid dishes in general. For most, it just means fried squid. They’re coated in flour and fried in ring-like shapes. In the culinary world, they also use the same word to refer to Mediterranean-style fried squid. But if we’re being specific, calamari and squid are two different species of sea creatures. You can tell them apart by the fins that form an arrow shape at the end of their head or hood. Squids’ fins are only found a short distance on the sides of their body. Calamari, on the other hand, have fins that run along the full length of their body.

Another difference between squid and calamari is their meat. For latter’s meat is softer and more tender. However, you can also get the same effect with squid meat by marinating or through slow cooking. In this recipe, we use squid since it’s more affordable. That way, you can enjoy a fancy dinner at home because this dish will surely end up tasting like it was served at a 5-star restaurant! And if you liked this recipe, then give our Copycat Olive Garden Fried Calamari a try! 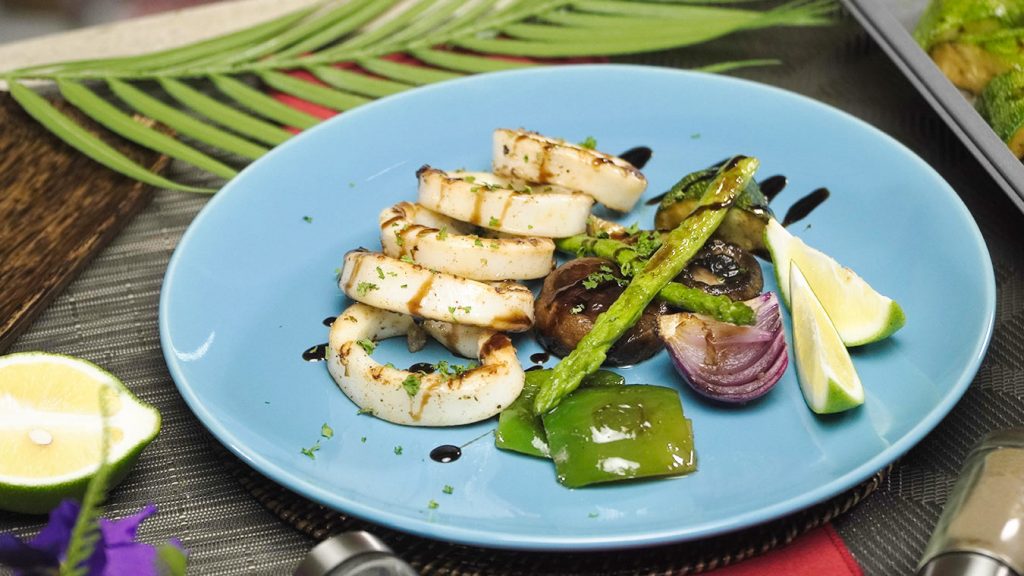 How To Make Calamari With Vegetables

Bite into soft, savory squid and refreshing asparagus and tomatoes with this mouthwatering appetizer. Our Calamari With Vegetables Recipe combines seafood and vegetables like it’s a match made in food heaven!

Make the squid softer by pre-cooking it in boiling water for 30 to 45 minutes. Let it cool down to room temperature, then proceed to grilling.

Can you make calamari with octopus?

Many people confuse octopus with calamari or squid. They may look similar because of their tentacles, but the two are totally different species. Squid meat is a bit tougher, but has a smoother texture compared to octopus meat. Octopuses are also prepared differently than squid, as Japanese cuisine usually serves them raw. Although you can try experimenting with calamari recipes by using octopus, calamari essentially means squid dish in cooking.

Why is my calamari tough or rubbery?

Squid meat is usually firm and chewy, although it can turn tough and rubbery when overcooked. While some would say that you should either cook it quickly over high heat or slowly over low heat, in this recipe we recommend that the squid first be boiled before grilling.

Is squid ink safe to eat?

Squid ink is edible and is actually used as a food additive in a lot of different dishes. 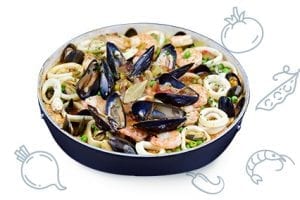 Eat like a king with our delectable Calamari With Vegetables Recipe. This appetizer brings the taste of the sea to your dining table. The addition of grilled vegetables like asparagus and tomato also complements the rich taste of squid. Enjoy something new with this calamari recipe!
Share:
Submit Your Own Recipe 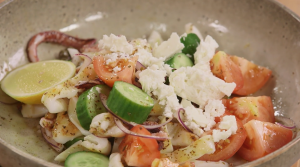 1
2
3
4
5
Enjoy the peppery taste of chilled calamari salad, with the tangy lemon taste that enhances the flavor of the tender squid meat.
1 hr 15 mins 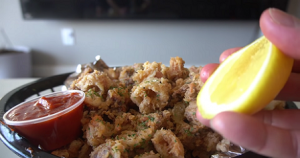 1
2
3
4
5
Make your own fried calamari with the help of this easy recipe. The squid is crisp and light and you can serve this best with lemon or marinara sauce.
15 mins 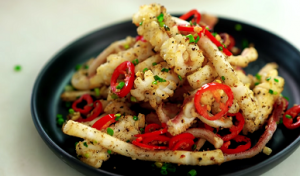 1
2
3
4
5
Soft, chewy, and crispy all at once, this grilled calamari makes for a delectable dish served atop charred, refreshingly minty bell peppers!
30 mins 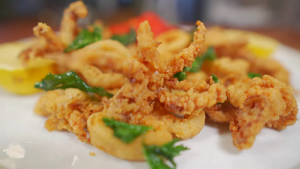 1
2
3
4
5
Make this classic calamari recipe at home with only 5 simple ingredients needed. Sliced squid drenched in flour and deep-fried until golden brown.
30 mins 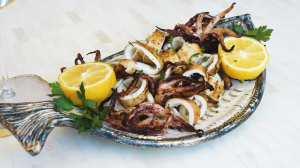 Have a barbecue party soon? Then this grilled calamari that's marinated in a savory, sweet, and tangy sauce is perfect for you! 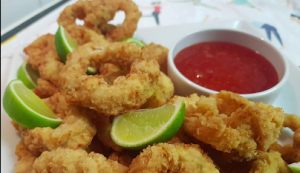 1
2
3
4
5
Who said calamari only works for squid? This coconut calamari is impressively delicious, offering a mix of soft on the inside and crunchy on the outside!
2 hrs 30 mins 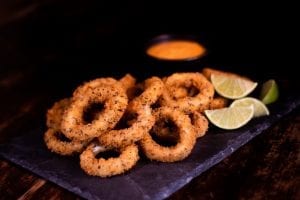 Our quick and easy calamari fritti lets you enjoy an appetizer that’s deliciously crispy and chewy. Serve them with a sweet and tangy dipping sauce and salad on the side to complete the ensemble. 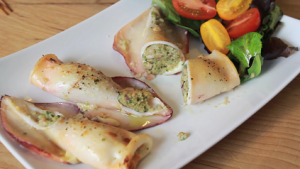 1
2
3
4
5
This grilled stuffed calamari is packed with tender calamari pieces, spicy Italian sausages, and hearty spices, for a smoky and juicy side dish!
2 hrs 5 mins 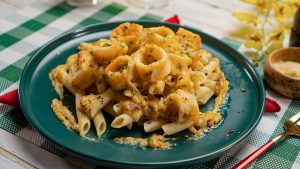 Calamari pieces cooked to a tender and mixed with a creamy pasta sauce. This calamari pasta recipe will be your latest favorite seafood dish! 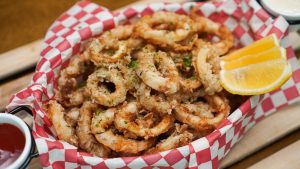 You’ll go back for another bite of this easy Olive Garden-Inspired Fried Calamari Recipe! Enjoy its crunchy texture, tender flesh, and savory taste! 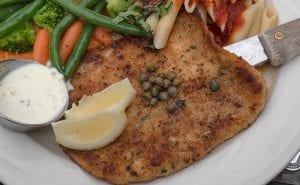 This calamari steak gets a zing of flavor from lemon caper sauce. Calamaris are dredged in flour and parmesan cheese then sauteed for a golden brown finish. Enjoy this delicious calamari with lemon wedges, and pair it with a tasty crisp white wine. 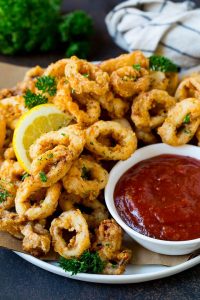 1
2
3
4
5
Make an easy and delicious appetizer with our fried calamari! It's coated with a well-seasoned flour, and fried to golden brown perfection.
55 mins
Comments