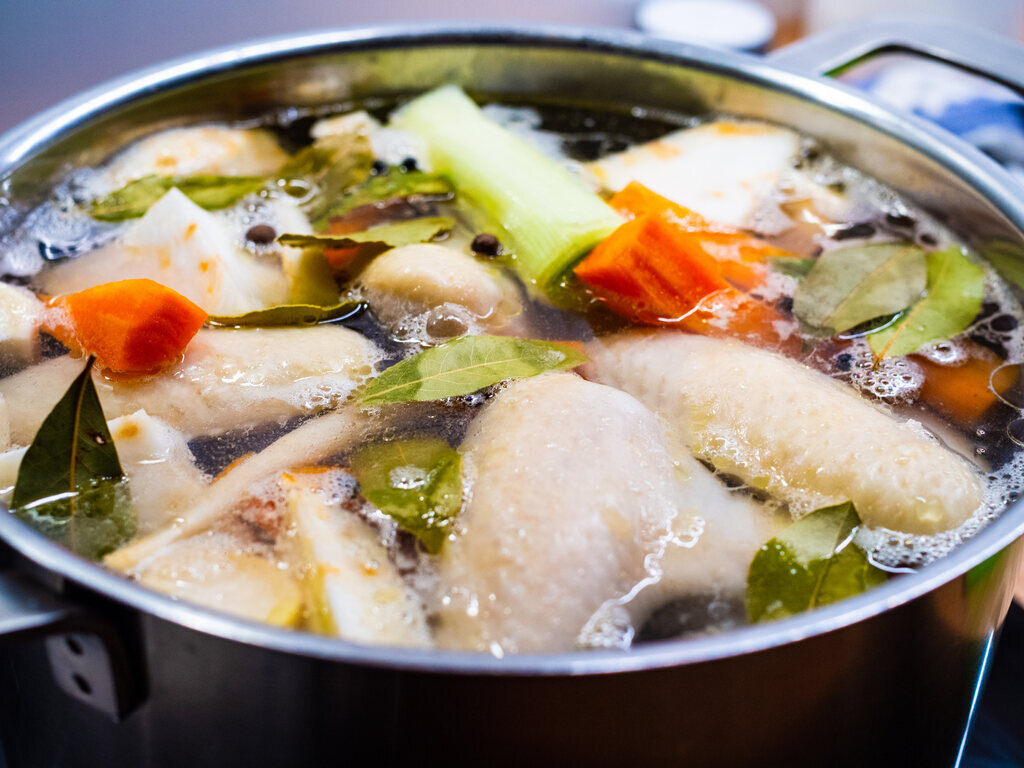 Chicken is one of the healthiest sources of protein. Add to that, it’s also one of the flexible meats out there. To start, you can fry or barbecue it. And then there’s roasting. You can learn how to truss a chicken for grilling and roasting, too. There’s just a myriad of ways you can prepare and cook chicken, and one of the popular methods is boiling. Boiling not only ensures your chicken is cooked through before baking or grilling, but it also gives a flavorful homemade chicken broth as well. Boiled chicken can be used for soups, salads, or pasta. Likewise with the chicken broth. That is why knowing how to boil chicken is extremely beneficial in the kitchen.

With that said, it’s not as simple as you might think. To have flavorful chicken stock and tender chicken meat, you have to know how to boil chicken the right way. Not just boiling it plain and simple, but knowing what fresh herbs and vegetables to put, optimal cooking time for tender meat, and more. But not to worry, continue reading and know how to perfectly cook boiled chicken and use it for your next recipes.

How to Boil a Whole Chicken

There are several ingredients you can use when boiling chicken. For the liquid, you can use dry white wine, apple cider, or something as simple as water. But there’s no harm in combining two or three of these. Aside from the liquid, you can also flavor and season it with herbs and vegetables such as carrots, celery, garlic, and onion. And of course, you can also add bay leaves, salt, and peppercorns. 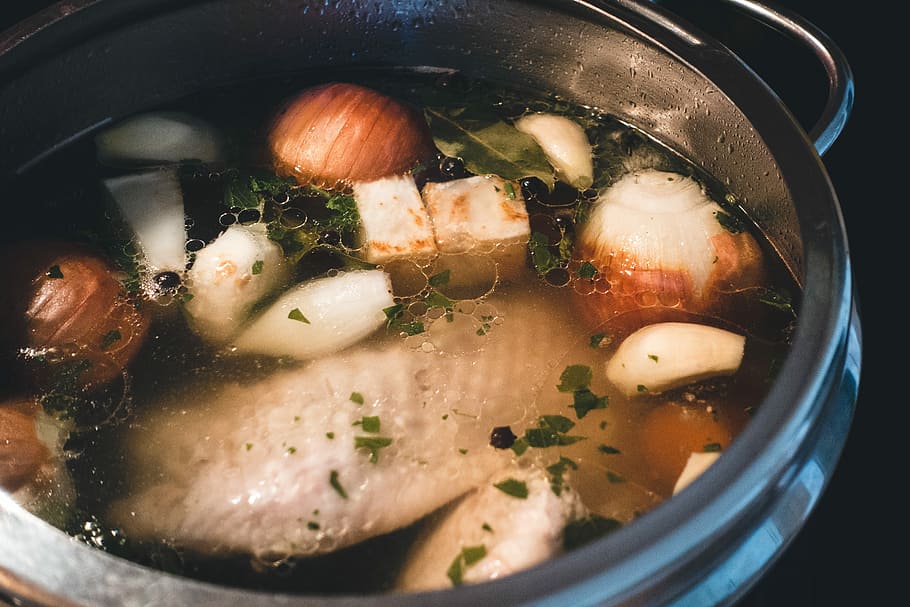 To get you started, you can try this recipe for boiled chicken.

Here’s what you need:

READ ALSO: How to Tell if Chicken Is Bad: 5 Signs to Look For and How to Avoid Them

How Long to Boil Chicken

When is chicken done? While it’s important that your chicken is cooked through to avoid foodborne illnesses, that doesn’t mean you have to overcook it. So, how long does it take to boil a whole chicken?

There are different boiling times for different cuts of chicken. The quantity and weight of the poultry also affect the boiling time. For fresh whole chicken weighing up to 4 pounds, boil for 40 to 60 minutes. That said, one sure way to tell if your chicken is cooked through is by using a meat thermometer. Cooked chicken should reach an internal temperature of 165 degrees F. But if you don’t have a meat thermometer lying around, you can also check its appearance. If the chicken is still pink and juices are not free of blood or red color, then there’s a good chance it’s still raw.

How to Boil Chicken Breast 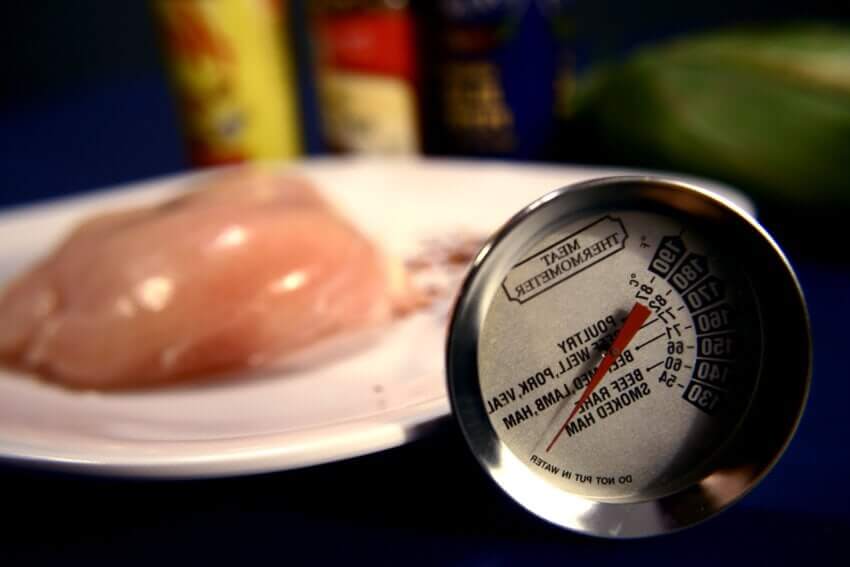 How Long to Boil Chicken Breast

Boiling vs Poaching vs Par Boiling 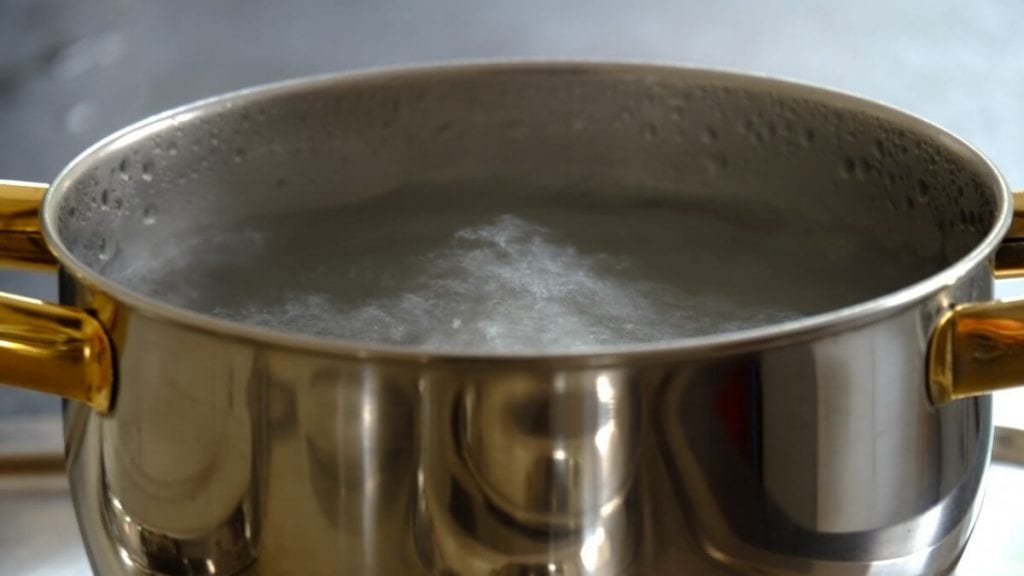 Ever had a whiplash trying to differentiate boiling, poaching, and par boiling? There might come a time you wondered their differences as you’ve often read these three in cooking instructions. Not to worry! In this section, we’ll discuss their differences in a way it will be easier for you to remember the next time you try this easy boiled chicken recipe.

Let’s start with the one that’s easier to understand — boiling. Boiling is simply food immersed in water that has reached a boiling point of 212 degrees F or 100 degrees C. Meanwhile, poaching refers to immersing food in barely simmering water or liquid with a lower temperature of 158 to 176 degrees F. For this method, it’s important to achieve a gentle boil so as not to ruin gentle foods. This method is commonly used for foods such as fish, fruit, and dishes like this light poached eggs recipe.

While boiling and poaching is a method wherein you completely cook food (albeit slowly for the latter), parboiling is merely the first step in cooking. Meaning, you just partially cook or semi boil food in preparation for the next step. Additionally, it’s also a basic cooking method for cooking vegetables like broccoli.

Tasty Boiled and Shredded Chicken Recipes to Can Try 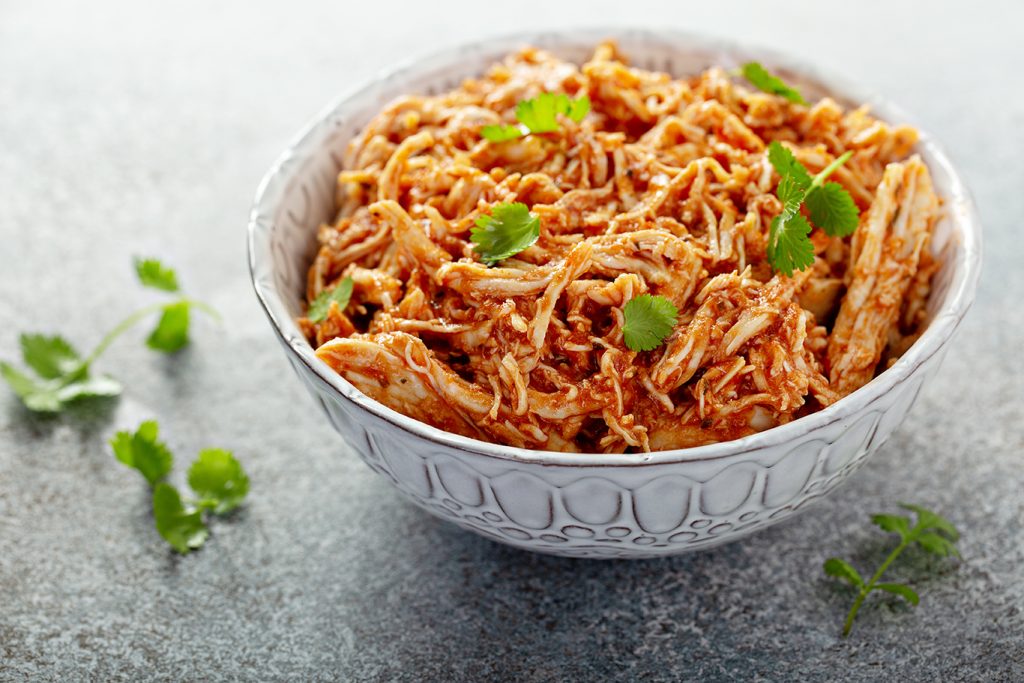 Now that you know how to boil chicken, let’s get right to dishes you can easily whip up at home. We have included boiled chicken dishes that you might like, as well as some ideas on what to make with shredded chicken.

How To Store Boiled Chicken

Boiled chicken is one of the best foods to stock up on for make-ahead meals. Placed in freezer containers, you can store your boiled chicken in the fridge if you plan to cook it within a few days. But, you may also store it in the freezer to give it a week more shelf life. It can even be good for up to three months if the chicken is cooked thoroughly.

Knowing how to boil chicken is just as important a skill as trussing because it yields flavorful and tender chicken. The chicken stock where you boiled the chicken can also be used for other dishes like pastas and soups. Add to that, moist chicken breast can also be used in a myriad of ways, making it worth your while. And believe us, your guests will also thank you for it.

Read Next: 25 Amazing Coffee Bar Ideas For A Cozy Home Cafe This 2021

How to Freeze Avocado (With Video Guide!)

Can You Freeze Cream Cheese? Yes and Here’s How